BID: ‘Misinformation is being peddled to the businesses’ 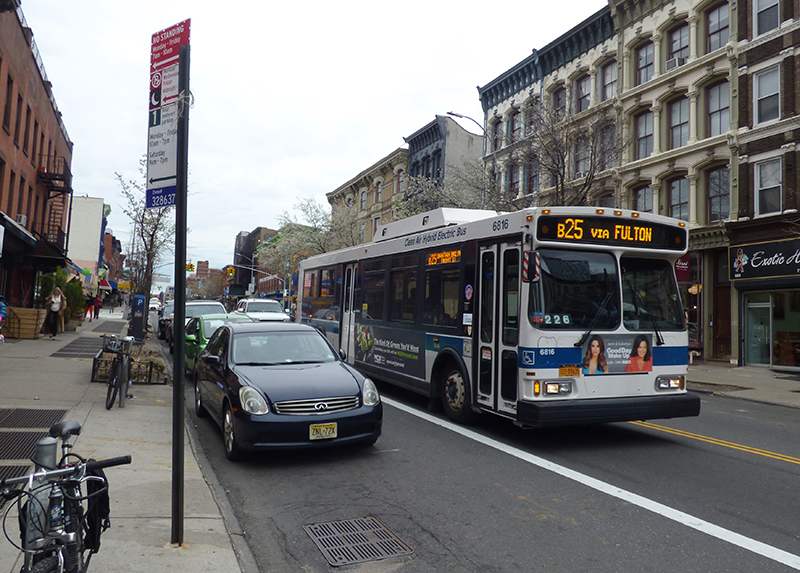 The mayor singled out the bus route on Livingston Street from Boerum Place to Flatbush Avenue. Eagle file photo by Mary Frost
Share this:

Dozens of business along Fulton Street in Fort Greene and Clinton Hill are fighting their own business improvement district over a city plan to take away parking spaces and add bus-only lanes in front of their stores.

The city says the bus-lanes will speed up snarled bus service for the roughly 20,000 riders who take the B25 and B26 lines every day, and transit advocacy groups like Riders Alliance and NYPIRG Straphangers Campaign applaud the plan, which will eliminate parking on Fulton Street — on the south side during the evening rush and on the north side during the morning rush.

Because of heavy traffic and double parking, buses traversing the stretch of Fulton Street between Lafayette and Grand avenues move roughly 7 to 8 miles per hour during rush hour, according to a Department of Transportation study.

Roughly 80 shopkeepers, however, petitioned Small Business Services Commissioner Gregg Bishop demanding that the city stop the project, arguing that the lanes will mess up deliveries and drive away customers. They also claim that the local business improvement district and the Department of Transportation made the decision to add the lanes without reaching out to them.

Community activist Schellie Hagan said she organized the petition drive because the “stores are voiceless.”

Small Business Services has not answered the stores’ letter either, Hagan said. That agency did not respond to the Eagle’s request for comment.

Kellogg said that when the BID was informed of the original proposal, the group expressed its concerns to the city about the impacts on area businesses “in writing and in person at the Community Board’s public hearing.”

The city then surveyed area businesses and studied when the demand for spaces for motorists to park their cars or truckers to make deliveries was highest.

As a result, the city modified the plan so that only one side of Fulton would be affected. “FAB did not get the plan eliminated, but did secure a 50 percent cut in number of hours from the original [city] proposal,” Kellogg said.

The group also advocated for fewer bus-only hours in the afternoon, “but we did not prevail,” Kellogg said.

Fulton Street already has bus-only lanes in Downtown Brooklyn and the very western portion of Fort Greene. But at Lafayette Avenue, the buses have to merge with car traffic, causing delays.

The city plan, which goes into effect in the next few weeks, would extend that bus-only lane from Lafayette Avenue to Grand Avenue in Clinton Hill between 7 and 10 a.m. on the north side of the street and from 2 to 7 p.m. on the south side.

Subi Widdi, whose family that has operated the Key Food on Fulton Street at St. James Place for 50 years, said the new express lanes will remove roughly 12 parking spaces in front of the store and prevent it from getting deliveries during restricted hours. The store gets about 40 deliveries a day.

Smaller, mom-and-pop stores will be especially hard-hit, he said. Key Food’s suppliers will likely be able to afford the parking tickets, since their suppliers generally are enrolled in the city’s Stipulated Fine Program, but smaller merchants’ suppliers are not.

The Stipulated Fine Program allows businesses to pay a pre-set, reduced fine amount for each offense, making traffic tickets just the cost of doing business in the city, Widdi said. The result is a lot of buses blocked by truckers who get a discount on their tickets, transportation advocates say.

Those advocates were vocal in support of the bus-only lanes, slamming Councilmember Laurie Cumbo (D-Fort Greene), for seeking to reduce the number of bus-only hours“to accommodate the needs of the commercial corridor.”

“You are so wrong on this issue,” wrote bagatellnumber12. “Why would you prioritize private car storage over proven solutions to speed up buses for thousands of commuters?”

Fulton Street in Clinton Hill is not the only busy Brooklyn thoroughfare where merchants have protested bus-only lanes.

In March, elected officials came out against a plan to install Select Bus Service lanes on Kings Highway between McDonald and Ocean avenues, according to Brooklyn Daily.

The MTA told Streetsblog that the changes were needed to improve “one of the busiest bus routes in Brooklyn.”

Editor’s note: The Eagle refers to State Senator Simcha Felder as “D?R” because he was elected as a Democrat, but caucuses with the Republicans. Stringer: New jobs in Brooklyn, but buses don’t go there