This is movie mega-star of yesteryear Mary Pickford, in costume for her role in the 1924 film “Dorothy Vernon of Haddon Hall.” AP Photo
Share this:

A century ago, when silent films were all the rage, America’s most famous actress almost became a Brooklyn resident.

Executives at a Midwood film studio called Vitagraph — see related story — built a house for Mary Pickford in nearby Ditmas Park West, which was then a new neighborhood.

The high-profile celebrity of yesteryear didn’t ever move into the beautiful house. But to this day, film buffs, preservationists and neighborhood residents refer to 1320 Ditmas Ave. as Mary Pickford’s house.

It’s one of the jewels of this landmark-worthy Victorian Flatbush micro-neighborhood.

Mary Pickford was a film-industry pioneer. In the course of her long career, she starred in “The Poor Little Rich Girl” and oh-so-many other movies, both silent films and talkies. And in 1919 she co-founded film distribution company United Artists with actors Charlie Chaplin and Douglas Fairbanks and director D.W. Griffith. They all set up film studios, too.

Thus Pickford gained creative control over her work — and became a leader in the film business instead of a hired hand.

In 1916, she was in serious contract negotiations with the head of Vitagraph — but ultimately broke off the negotiations. In a matter of weeks, Pickford signed a new contract with Adolph Zukor’s Famous Players, the studio for which she’d previously worked.

Historic homes are selling for more than $2 million

Ditmas Park West is full of eye-catching century-old houses. Most of them are made of wood. Many have porches and picturesque turrets.

We recently spent the day there taking photos of the old-fashioned architectural eye candy that can be found at every turn.

A good place to begin a stroll through the micro-neighborhood is the corner of Ditmas Avenue and Rugby Road, where Pickford’s house is located.

Right across from her house, there’s 1323 Ditmas Ave., which was sold for $2.115 million last year, city Finance Department records show. It has an eye-catching turret beside the front door. An online posting by Corcoran, the brokerage firm that had the sale listing for 1323 Ditmas Ave., says there are seven bedrooms, a library and a den in the 17-room house. It stands on a 36-by-109-foot corner lot and has a detached garage.

Another house at this intersection, 1403 Ditmas Ave., is a lovely wood-sided home with a turret and a wraparound porch. It was renovated after a 2004 fire. Picturesque houses on other parts of the avenue include 1421 Ditmas Ave., which is on the corner of Marlborough Road. A patchwork quilt of micro-neighborhoods

For instance, on the corner of Marlborough Road, there’s shingle-covered 1501 Dorchester Road, which is painted a fine hue of electric blue. The city Landmarks Preservation Commission has not granted protected status to Ditmas Park West. But residents and preservationists argue that it and five other Victorian Flatbush micro-neighborhoods deserve to be designated as a single historic district.

Preservationists see Victorian Flatbush as a patchwork quilt because over the years, several other micro-neighborhoods have won historic district status. They say it’s time to sew together all the pieces of the quilt, metaphorically speaking, so that all of Victorian Flatbush is landmarked.

Landmarking is important because property owners can’t demolish buildings in historic districts or make changes to their exteriors without the Landmarks Preservation Commission’s permission. Suburban-style homes on the site of John H. Ditmas’ farm

There are eye-pleasing houses on every north-south-running street in the micro-neighborhood. The charming shingle-covered house at 472 Argyle Road looks like a shoreline summer home in Maine. Rows of pastel-hued houses are especially fine-looking on the Westminster Road block between Dorchester Road and Ditmas Avenue.

Throughout this micro-neighborhood there are stands of impressively tall trees. One place you can see them is the Stratford Road block between Dorchester Road and Ditmas Avenue.

The presence of the train line encouraged developers to build suburban-style commuter housing in the area. The request is full of interesting info about Ditmas Park West.

It explains that the area was farmland that belonged to John H. Ditmas, a descendant of a Colonial Dutch family. He sold the land to Lewis H. Pounds in 1899.

The developer went on to become the Brooklyn Borough President, the New York State Treasurer and New York City’s 1932 Republican mayoral candidate, his 1947 obituary in The New York Times notes. 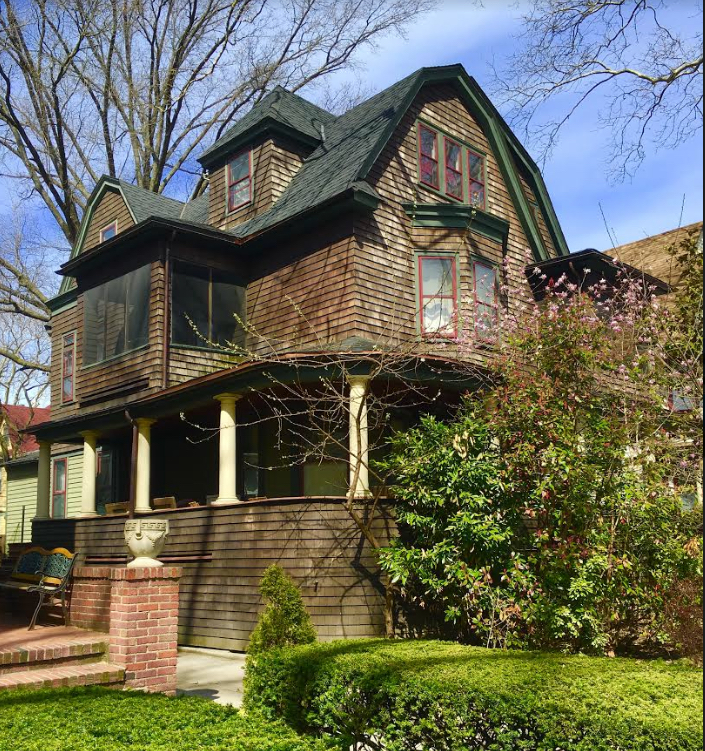 The Vitagraph Smokestack will live on, developer says