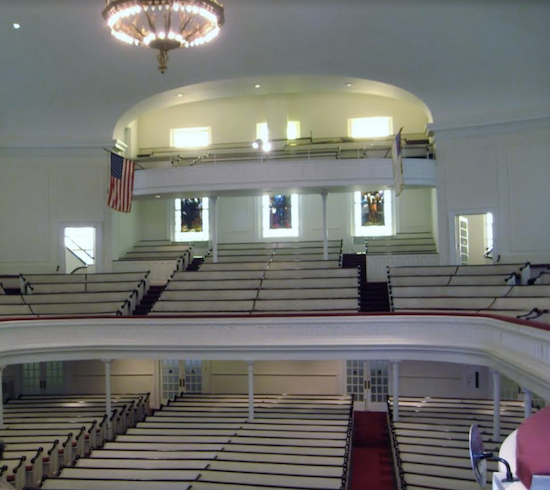 As the nation paused on April 4 to commemorate the 50th anniversary of the Rev. Dr. Martin Luther King Jr.’s assassination, Brooklyn is currently seeing a renewed interest in a sermon that he preached in 1963 at Plymouth Church, already famed for its role in the abolition of slavery and the Underground Railroad. Dr. King’s sermon contained admonishments and hopes that many people echo today through marches, speeches, news and social media.

The Rev. Dr. Harry Kruener, Plymouth’s widely respected senior minister during that period, had extended an invitation to Dr. King the previous autumn. This letter, now part of The King Center’s archive, was dated Oct. 18, 1962. Kruener wrote on church letterhead “that Plymouth Church of the Pilgrims [the congregation’s name at the time] … “has been designated a National Historic Landmark by the United States Government, as a foremost center of anti-slavery sentiment between its founding in 1847 and the outbreak of the Civil War, under the ministry and leadership of thee Rev. Henry Ward Beecher. The citation states, ‘No surviving structure or site commemorates the abolition movement so well.’

Indicating that a certificate would soon be issued, and that Plymouth Church would be augmenting the occasion with an event themed “The Continuing Struggle for Human Freedoms.” Kruener’s letter continued, “…the expressions in speech and in music will be centered around the current struggles of the Negro people to achieve social, political and economic justice and equality.

“We are writing to cordially invite you to be the principal speaker on this occasion. We believe that you, more than any other person, exemplify the spirit behind and inherent to this event.” He offered an honorarium of $500 and concluded, “Our endeavor would be to make this event a great rally of the forces in this city supporting the struggle of the Negro people in the South — and also the North.”

Kruener aimed for a February date around Lincoln’s Birthday (Feb. 12). The copy of King’s speech itself was dated Feb. 10, 1963.

Dr. King, in greeting the Plymouth Church congregation and thanking them for the invitation, began his sermon discussing the American Dream, “because America is essentially a dream — yet unfulfilled.” During his 15-page speech, King said that (in the Declaration of Independence section about Life, Liberty and the Pursuit of Happiness), “this is a dream, and the first thing we notice in this dream is an amazing universalism.”

Later in the sermon, King said, “Now, there are several things that must be done in order to make this dream a reality. In order to make the American dream real, we must be concerned about the world dream of peace and brotherhood. The world in which we live today is geographically one. Now we are challenged to make it one in terms of brotherhood and therefore every person of good will must have a world perspective.”

Later in his sermon, King emphasized, “The other thing that is so basic and necessary in order to make this dream a reality, is to get rid of the notion once and for all, that there are superior and inferior races. This idea still lingers around in spite of the evidence of great thinkers and the sciences.” He referenced cultural anthropologists Margaret Mead, Ruth Benedict, Melvin Hershkowitz and others.

“We have failed to make of it a brotherhood through our moral and ethical comment, and now we must all learn to live together as brothers or we will perish together as fools,” King said. “This is what we must face today. No individual can live alone; no nation can live alone. We are interdependent.”

Holy Week and Easter Around Brooklyn

The Most Rev. Nicholas DiMarzio, Bishop of Brooklyn, celebrated the annual Mass of Chrism at the Co-Cathedral of St. Joseph last Tuesday of Holy Week, March 27. During the Mass, the bishop consecrated the oils to be used in the coming year for sacramental anointing. He will also lead hundreds of priests and deacons in renewing their promises of service to the Church. The clergy will enter the church in procession at 6:45 p.m.

The Mass of Chrism is one of the most solemn and significant liturgies of the Catholic Church. It is marked by the ceremonial blessing of the oil of catechumens, the oil of the sick and consecration of the oil of chrism, which will be used in all churches of the Diocese of Brooklyn throughout the liturgical year. The oils are used to anoint the sick, baptize catechumens and infants, ordain priests and anoint altars. This Mass is celebrated in dioceses worldwide.

On Holy Thursday, Bishop DiMarzio celebrated the Mass of the Lord’s Supper, which commemorates the institution of the Holy Eucharist and the priesthood. It took place at Our Lady of Angels Church, in Bay Ridge.

On Good Friday, DiMarzio participated in there will be several large events across the borough and diocese to commemorate the day Jesus Christ died on the cross. The apostolic group Communion and Liberation sponsored its annual outdoor procession, “Way of the Cross Over the Brooklyn Bridge.” Timothy Cardinal Dolan and DiMarzio offered the opening prayer and reflection.

The group processed over the Brooklyn Bridge to Ground Zero, symbolically walking the path of Jesus toward his crucifixion.

First Presbyterian Church has a longstanding tradition of holding an Easter Sunrise Service on the Brooklyn Heights Promenade.

This year, Pastor Adriene Thorne preached on the theme of light entering the dark tomb. Contrasting the reactions of Peter, John and Mary Magdalene at seeing the empty tomb, Thorne said that Jesus is the light of the world.

“When Mary sees the empty tomb, she does not shout ‘He is risen!’ Rather, she runs. She hot-tails it the way most of us would,” pointed out Pastor Thorne.

She runs home to tell Peter and the others that the stone has been rolled away. Faith In Brooklyn for March 28