A young boy peeks out from behind a tree during a game of hide-and-seek on Tuesday in Cadman Plaza Park in Downtown Brooklyn. In the Borough President’s assessment of Brooklyn’s parks, Cadman received a ranking of “five leaves.” Eagle photo by Mary Frost
Share this:

An assessment of 270 parks in Brooklyn found that many lack amenities like drinking fountains, bathrooms and public Wi-Fi.

“Pulse of Our Parks,” compiled by Borough President Eric Adams, looked at 270 “active” Brooklyn parks that are more than one-half acre in size. Smaller “passive” parks were not included in the survey.

The survey, released Monday, looked at the existence of a “friends-of” group and programming; free Wi-Fi; access to drinking fountains and bathrooms; and support for active uses, such as basketball hoops and playgrounds. It did not track conditions such as cracked asphalt or rickety equipment.

The results were ranked using a color-coded leaf system, with parks able to garner a maximum of six leaves. Each leaf color indicates a specific category of measurement: A blue leaf indicates the park has water fountains; red means a comfort station; green stands for a “friends-of” group; orange indicates programming; gray equals Wi-Fi; and a full yellow leaf stands for two or more active uses.

“Unfortunately, this assessment did not capture the state of good repair of the infrastructure found within the parks,” Adams said in the report. “In many instances, parks need an immense upgrade. During my first term, I have allocated close to $30 million in funding to improve the state of our parks, but it is clear that more must be done.”

Adams called parks “the great equalizer,” and said that he will use the results to focus on key areas of park improvement:

–          Community engagement: “friends-of” groups and partners. The first meeting on this will take place on Monday, April 16th at Brooklyn Borough Hall.

–          Funding: committing one percent of the city budget to the Parks Department, totaling $8.8 million, instead of FY19’s preliminary $5 million.

–          Land use purview – the inclusion of park space and open space in uniform land use review procedure (ULURP) decisions.

Adams feels that one way to empower community members to become involved in their local park is to duplicate the Open Space Alliance (OSA) model used in Community District 1. Unlike traditional park conservancies, OSA is committed to improving all the parks in the district, benefiting smaller profile but equally important parks.

Adams has also called for the creation of the BQGreen, a 3.5-acre park decked across the Brooklyn-Queens Expressway (BQE) in Williamsburg.

The report’s announcement came one day ahead of the City Council’s preliminary parks budget hearing, and was held at the Ridgewood Reservoir, which Adams and other local elected officials recently supported for designation to the National Register of Historic Places.

Information for the report was gathered from multiple sources including the Parks Department, New Yorkers for Parks’ City Council District Profiles, Partnership for Parks, and the United States Forest Service Stewardship Mapping and Assessment Project (STEW-MAP) database, among other resources. The 526-acre Prospect Park also received five leaves and has most of the amenities above, plus a baseball diamond and skating rink.

Another five-leafer is 36-acre McCarren Park in Williamsburg. The park contains basketball courts, comfort stations, drinking fountains, a nonprofit partner organization, playgrounds and Wi-Fi, as well as hosting programming such as movie screenings.

Six-acre Trinity Park in Downtown Brooklyn, however, received only one leaf. Its only amenity is a drinking fountain. The three-acre Walt Whitman Park, also in Downtown Brooklyn, also received just one leaf, for its drinking fountain. (This may be a misbranding, however, as the water fountain is actually an active play fountain, and the park is considered “passive,” despite its size.)

On the smaller side, Lentol Garden in Greenpoint, about 3/4 of an acre in size, contains no amenities but does have a nonprofit partner organization on its side, allowing it one leaf. Size is not necessarily an indicator of amenities, however. Martinez Playground in Williamsburg, two acres in size, contains a basketball court, comfort stations, a drinking fountain, a nonprofit partner organization and a playground, netting it four leaves.

The 8-acre Coffey Park in Red Hook is dog-friendly, and contains a basketball court, comfort stations, a drinking fountain, a playground and Wi-Fi, as well as hosting a variety of programming. It received five leaves.

Carroll Park in Carroll Gardens, a bit under 2 acres, is packed with basketball and bocce courts, comfort stations, drinking fountains, a friends-of group, a playground and Wi-Fi, , as well as hosting programming such as clothing and food drives, movie nights and parades.

Sunset Park, at 24 1/2 acres, is another five-leaf park. Dog-friendly, the park contains basketball courts, comfort stations, drinking fountains, a friends-of group, playgrounds, a swimming pool and Wi-Fi, as well as hosting a variety of programming.

The four-leaf Shore Park and Parkway on 58 acres in Bay Ridge, is dog-friendly and contains baseball fields, basketball courts, comfort stations, drinking fountains, a friends-of group, a playground and tennis courts, as well as hosting programming such as concerts.

All 107 acres of Coney Island Beach and Boardwalk are considered a park. It has received five leaves for all its amenities, which include drinking fountains, comfort stations, a friends-of group, multiple play facilities and Wi-Fi, as well as programming such as fireworks.

Floyd Patterson Ballfields on two 1/3 acres in Brownsville contains only a drinking fountain. It has received 1 1/2 leaves.

For more rankings, see the full report at http://www.brooklyn-usa.org/reports/. 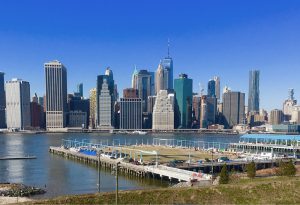