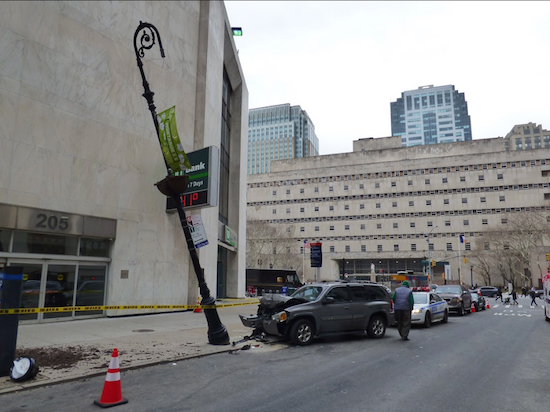 Pedestrians filled the sidewalk near TD Bank during the busy lunch hour.

“Thank goodness he ran into the lamp post,” a man working outside at that time told the Brooklyn Eagle. “If he had driven onto the sidewalk he might have killed someone.”

While a witness said that the driver, who was conscious and speaking, was removed to an ambulance on a stretcher, an NYPD officer on the scene said there were no injuries.

If so, the driver was extremely lucky. The windshield of the car directly above the steering wheel was cracked in a large-spider-web pattern.

An NYU Langone ambulance and several police cars were on the scene. Because of fears that the crazily-tilting lamp post would fall down completely, a nearby newsstand was evacuated and a section of the sidewalk was taped off.

An official NYPD report was not available at news time. Check back for updates.