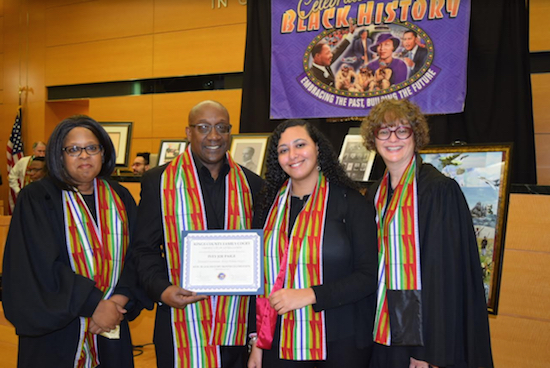 For one afternoon only, Brooklyn’s Family Court was transformed into a concert hall for a celebration of Black History Month that included judges and court employees leading an audience through a medley of songs by black artists as part of its annual celebration on Thursday.

This year’s theme for Black History Month is “African Americans in Times of War,” so accordingly, the courts invited Anthony Cochran, a retired Vietnam veteran who served in the Army Corps of Engineers, to be the keynote speaker.

Cochran discussed a brief history of African Americans fighting in the U.S. military going all the way back to the Revolutionary War and the Battle of 1812.

“They did not hesitate to respond to the call to arms despite the fact that they were initially excluded from military service during the Revolutionary War,” Cochran said. “However, the Continental Congress authorized service on limited basis, authorizing African Americans to fight who had previously served in a state militia.

“That led to the formation of the first Rhode Island regiment in 1775 and 1783, which was significant for having a large number of African-American troops in their midst. And they fought in well-known battles like the Battle of Red Bank, the Battle of Yorktown and the Battle of Bunker Hill,” Cochran continued. Judge Ben Darvil remarked that the history is even more remarkable when considering the fact that African Americans have never hesitated to fight in U.S. wars despite centuries of oppression.

“It makes you think that all of that history of service was provided notwithstanding all of the complicated history of this country — slavery, Jim Crow, separate but equal,” Darvil said. “It was only about 70 years ago that the armed forces of this country became desegregated after World War II by Truman. It’s incredible when you think about all of the service and sacrifice by people who were not really treated the same.”

Hon. Jacqueline D. Williams and Hon. Amanda White, supervising judge of the Family Court, along with Nesta Johnson, presented awards to Cochran as well as band leader Ivey Joe Paige and Cynthia A. Lee for their contributions to the Black History Month celebration.

After awards were presented, Paige led his band, which featured Judge Robert Mulroy on acoustic guiard, and “Kings Family Singers,” who featured Hon. Sharon A. Bourne-Clarke amongst its members as the group of judges, attorneys and agencies that appear in Family Court took over the show. Songs like “This Little Light of Mine,” “Oh Happy Day,” “My Girl,” “Thank You Lord (For All You’ve Done For Me)” and “We Shall Overcome” filled the courtroom and spilled out into the hallways. If it weren’t for the standing-room only crowd already filling the courtroom, it would have drawn random jurors and court employees.

“I just want to thank the Family Court’s Black History Month Committee and the larger court system’s committee,” said Judge Amanda White. “Every year, the committees work tirelessly to organize, support and sponsor the events planned throughout this month and to recognize and celebrate the achievements, talents and outstanding skills to the many black Americans who have contributed in many great ways to this nation.”