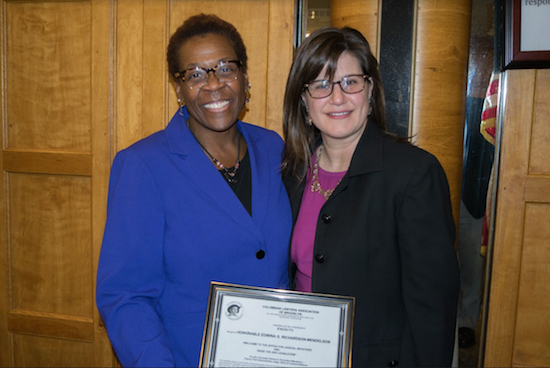 The Columbian Lawyers Association of Brooklyn hosted one of New York’s top judges for a Continuing Legal Education (CLE) lecture on the Raise the Age Legislation during its monthly meeting at the Rex Manor in Dyker Heights on Tuesday, Feb. 6.

Deputy Chief Administrative Judge Edwina G. Mendelson, from the Office for Justice Initiatives, gave a one-lecture titled “Welcome to the Office for Judicial Initiatives and Raise the Age Legislation” during which she explained the purpose behind her office, and what the upcoming changes in the legislation mean for 16- and 17-year-olds.

“She runs the newly expanded Office for Justice Initiative which is tasked with ensuring legal access to justice for all New Yorkers regardless of income, background or special needs,” said Linda LoCascio, president of the Columbian Lawyers. “She is also in charge of several court initiatives, including the Access to Justice Program.

“Judge Mendelson was first appointed as a judge in family court in 2003,” LoCascio continued. “I still remember meeting her and for years I have watched as her career has soared.”

Upon taking the podium at the Rex Manor, Mendelson greeted the mostly Italian audience of judges and attorneys, “Buona sera a tutti!” which drew a big cheer.

Mendelson began her speech by talking about her position, which she inherited from Hon. Fern Fisher and Hon. Juanita Bing Newton before her. She also explained that despite the fact that her title has technically changed, the job handling access to justice issues has only expanded.

“We are now Access to Justice plus, we are adding on many new and other initiatives in addition to our access to justice work,” Mendelson said. “We’re doing work on child welfare and juvenile justice initiatives including implementation of a new law that is going to be impacting more people than know it — Raise the Age.”

During her lecture, Mendelson opened with a talk on some of her office’s newest initiatives, like the new Limited Scope Representation, which allows litigants in civil matters to hire an attorney to take on only a portion of their case. She then spent the bulk of the time discussing the impact of the Raise the Age law.

“For many years we heard that NY was one of only two states in the country that treated 16-year-olds automatically as adults and that is still true because the law hasn’t gone into effect yet,” Mendelson said.

With the help of materials she passed out that included charts explaining the changes to the law, Judge Mendelson explained the new process for handling 16- and 17-year-olds in the state. She said that, for the most part, except in cases of violent felonies, the family courts will be handling cases involving minors.

“It’s complicated…and the implementation will be interesting,” Judge Mendelson said. “It’s also exciting because how often do you get a chance to create an entirely new justice system and that’s what’s happening. There are a lot of pieces. Operational issues, facilities issues, transfer of cases between courts, data, technology and case management issues.” The Columbian Lawyers have decided not to go to Atlantic City anymore and will instead head to Foxwoods Resort in Connecticut for its annual Spring CLE. The trip will take place on Thursday, May 3 to Saturday, May 5.

“We decided to change it up a little and do something new,” said Steve Bamundo. “The venue has been fully scouted and vetted by Lucy DiSalvo. We’re lining up a tremendous array of speakers, who have some very interesting topics.” Thank You From the Cutrona Family

Lucy DiSalvo, executive director of the Columbian Lawyers, read aloud a letter from the Cutrona family following a ceremony held in January to dedicate a plaque in the hallways of the courthouse at 360 Adams St. in honor of the late Hon. Anthony J. Cutrona.

In the letter, the family said that they were touched by everyone’s heartfelt words and stories, but they were especially moved because the judge’s grandson’s got to hear them.

“We are thankful to everyone who spoke and shared their special memories,” DiSalvo read on behalf of the family. “We are so happy that dad’s five grandsons were able to gain an insight and deeper appreciation of their grandfather’s service to the legal community and the impact he had on so many people.”