Eye on Real Estate: The east side of the neighborhood is full of architectural eye candy Welcome to Doctors' Row, the Bay Ridge Parkway block that has been proposed for designation as a historic district. Eagle photos by Lore Croghan

The landmark-worthy homes on Doctors’ Row in Bay Ridge are so fine that you almost welcome a trip to the podiatrist.

The limestone barrel-fronted rowhouses, built more than a century ago, can be found on Bay Ridge Parkway between Fourth and Fifth avenues. There are medical offices of all sorts, and a law office here and there, on the lower floors of these private homes.

Three cheers for the Bay Ridge Parkway 400 Block Association, a neighborhood organization that has successfully campaigned to get the city Landmarks Preservation Commission to consider designating Doctors’ Row as a historic district.

And hurrah for the Historic Districts Council, too, for working with the neighborhood organization in this vital endeavor.

Landmarking the iconic block would protect these rowhouses from demolition and ensure that future renovations are carried out in a historically appropriate way. East side, west side

Doctors’ Row is one of many stellar sights to be seen on Bay Ridge blocks east of Fourth Avenue.

The east side of the neighborhood, though eminently Instagram-worthy, doesn’t get as much love from sightseers and urban adventurers as the west side, which is closer to the shoreline.

To make up for our own inattentiveness to the area east of Fourth Avenue, we just spent two days taking pictures of its beautiful housing stock and some beloved Fifth Avenue commercial buildings.

Allow us to explain why the east side of Bay Ridge gets short shrift from visitors.

In the winter, when daylight hours are all too brief, they’re inevitably going to head west first.

That’s where Bay Ridge’s most famous building, the Gingerbread House, is located. The house where Tom Selleck’s character lives in CBS TV’s “Blue Bloods” is also there. So are Shore Road’s elegant hilltop houses and numerous mansions on other nearby streets.

The west side of the neighborhood also has pedestrian access points to Shore Road Promenade, which offers great views of the Verrazano-Narrows Bridge at one end and the World Trade Center at the other.

So how about a second visit to the neighborhood? Focus on the east side. Start with Doctors’ Row, of course. According to a Brooklyn Reporter story by Jonathan Sperling, the neo-Renaissance Doctors’ Row houses were constructed by the Bay Ridge Development Co.

In addition to Doctors’ Row, many spots east of Fourth Avenue are eye-charmers.

For starters, there are also limestone rowhouses with lots of medical offices on 77th Street between Fourth and Fifth avenues. We’ve seen real-estate listings that refer to this block as “Bay Ridge’s unofficial second Doctors’ Row.” Here are some other must-see spots on the east side of Bay Ridge:

Lincoln Savings Bank is gone, but its Bay Ridge branch building lives on.

The stunning stone building is on the corner of Bay Ridge Parkway and Fifth Avenue, steps away from Doctors’ Row.

An enormous medallion with a portrait of President Abraham Lincoln can be found over the front door of 7427 Fifth Ave. — a visual reminder that a bank named after him stood here.

The stately building is now a Chase branch.

According to a posting on the website NYC Explorer, architecture firm Koch & Wagner designed the Art Deco-style Lincoln Savings Bank, which was constructed in 1934.

Lincoln Savings Bank began its existence in the 1860s as the German Savings Bank of Brooklyn, a Brownstoner.com story by Suzanne Spellen says. The bank’s name was changed during World War I. In recent decades, a series of savings-bank mergers and acquisitions turned 7427 Fifth Ave. into a Washington Mutual branch.

Kleinfeld Bridal is gone but not forgotten

If only Kleinfeld Bridal had stayed in Bay Ridge.

The reality-TV show “Say Yes to the Dress” would have been filmed right here.

Sadly for neighborhood merchants, the famed bridal salon moved to Chelsea in 2005. The television series started filming in 2006.

TD Bank is located there now.

The bank has a 15-year lease that was signed in 2006 with lease-extension options for 20 years and after that, right of first refusal to rent the space, Finance Department records indicate. And the bank has a right of first offer to buy the building.

The owner of 8206 Fifth Ave. is a real-estate company created by the founders of Kleinfeld Bridal, namely Hedda Kleinfeld Schachter and her husband Jacob Schachter, Finance Department records show. Was this Arthur Constant’s house?

There’s a dreamy old house at 457 Ovington Ave. that looks a little bit like a buff-brick palazzo. It was built a century ago.

When it was put up for sale in 2015, marketing materials said it had been the home of Arthur Constant, an early 20th-century Bay Ridge developer. Say sayonara to this Victorian house

See it while you can.

It’s not in the best of shape. But the stand-alone Victorian house at 473 77th St. has elegant massing and is on a prime Bay Ridge block.

Too bad the new owner isn’t going to renovate it.

Instead, HKC Development LLC has filed plans with the city Buildings Department to demolish the house and construct a three-story, two-family home with commercial space.

Which way to Stewart Avenue?

On numerous blocks on the east side of Fourth Avenue, there are classic barrel-fronted rowhouses of limestone or brick. Among these is the 74th Street block between Fifth and Sixth avenues, where many of the residents fly American flags, which adds an extra touch of beauty.

On 80th Street between Fourth and Fifth avenues, there are picturesque stand-alone wood-frame houses with columned front porches. If you do a thorough walk around the area, you might discover a street name or two that’s new to you.

We know the map of Brooklyn pretty well — but we’d never heard of Stewart Avenue until our recent Bay Ridge photo shoot.

A snippet of Stewart Avenue runs from 72nd Street to 74th Street and is east of Sixth Avenue. At the eastern edge of Bay Ridge, you’ll of course find the fenced-in trench in which the Gowanus Expressway runs.

At the end of 84th Street, there’s a pedestrian overpass where you can watch the mighty highway’s rivers of traffic flow and gaze at the Verrazano-Narrows Bridge.

The span is a fine sight to see, off in the distance. 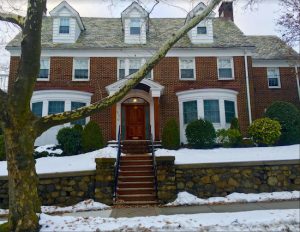