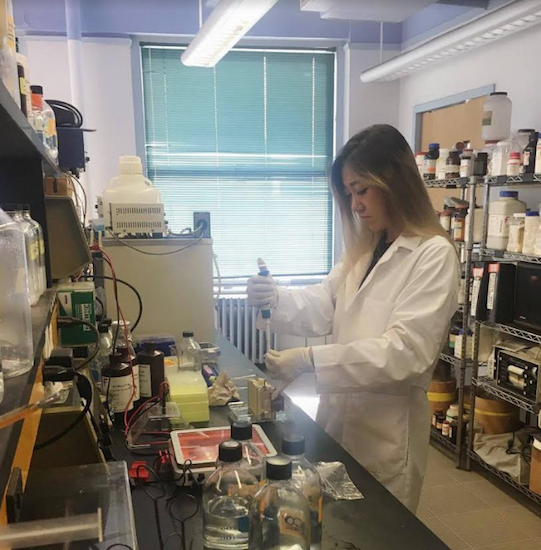 Graduate student Nini Fan, pictured hard at work in the lab, came up with the concept for the university’s ambitious project. Photo courtesy of LIU Brooklyn
Share this:

Students and professors at the Brooklyn campus of Long Island University (LIU) will be taking part in an innovative new project that involves an unlikely marriage between science and commerce.

Supervised by their professors, students at LIU Brooklyn will be busy at work on project for Innovation Corps, a program administered by the New York City Regional Innovation Node (NYCRIN) for the National Science Foundation.

The team from LIU Brooklyn will create a genomic sequencing core facility that could one day generate revenue for the school. The campus is located at One University Plaza in Downtown Brooklyn.

The ultimate idea of the project is to provide genomic sequencing services to local Brooklyn companies and researchers, according to school officials. The project will also serve as a training program for biology students.

The lab at the LIU Brooklyn campus will play an important role in the execution of the project since it contains a high-level genome sequencing machine, school officials said.

Under the plan, the ambitious project will spawn the creation of a biotech consulting firm.

The concept for the project was developed by Nini Fan, a graduate student at LIU Brooklyn. She is currently conducting research involving DNA sequencing, immunology and developmental biology.

“We are bringing this ‘Next Gen’ technique to a larger audience of scientists, teachers, and students to enable them to develop emerging technology concepts into valuable new products through public-private partnerships,” Fan said in a statement released by LIU Brooklyn. “We are devoted to meeting the needs of DNA sequencing for the research community and eventually providing our own line of products.”

“LIU Brooklyn is at the forefront of science and tech entrepreneurship and this project exemplifies the potential of novel ideas that derive from deep science. In a sense, biotech is the new coding, using biological components instead of a software algorithm to accomplish great advances. And with so many biotech companies located in close proximity of our Brooklyn campus, there are tremendous synergistic opportunities,” Troudt said in a statement.

NYCRIN is led by the City University of New York in partnership with New York University and Columbia University. NYCRIN accepted the LIU Brooklyn team to participate in its Fall 2017 I-Corps Cohort program. The cohort helps researchers turn their scientific discoveries into economically viable products and startup ventures.

While participating in the program, team members learn how to deal with customers and how to turn their innovations into commercial products.