Medicaid cuts could ‘decimate’ safety net hospitals all over Brooklyn If Congress doesn’t rescind cuts to a Medicaid program scheduled to take effect on Oct. 1, Brooklyn’s most vulnerable hospitals like Kings County, Interfaith Medical Center (shown above) and SUNY Downstate could be financially crippled. AP file photo
Share this:

Unless Congress rescinds the scheduled cuts, hospitals across the state serving low- income and uninsured patients could go into financial shock, with Brooklyn’s most vulnerable hospitals like Kings County, Interfaith Medical Center and SUNY Downstate being among the biggest losers.

“On October 1st, unless something else is done, a multi-billion dollar cut will go into effect, which will impact the neediest New Yorkers and the hospitals that serve the neediest New Yorkers,” Cuomo said. He added, “This is current law. Congress would have to stop this affirmatively. If they do nothing, if they don’t reach agreement, if they gridlock, this goes into effect in 11 days. And that’s why this is frightening.”

One hospital that would be affected is Kings County, a member of NYC Health + Hospitals Corporation (HHC). Kings County spokesman Robert de Luna told the Brooklyn Eagle on Thursday, “Without DSH funding, NYC Health + Hospital’s essential mission to provide care for all, including the uninsured and underinsured, would be seriously threatened. While the proposed cuts are not new, we will continue to make our case in Washington and Albany that these cutbacks have to be reduced and delayed.”

One Brooklyn Health, a proposed restructuring of several unstable Brooklyn hospitals, is another health care system that would be hurt by the cuts.

One Brooklyn Health “is the amalgamation of what we’re putting together in Brooklyn right now,” Cuomo said, adding that this group along with Wyckoff Heights Medical Center and several other hospitals would bear “the initial lion’s share of the burden.”

Cuomo: No way New York can pay for these cuts

New York would receive 16 percent of the DSH cuts, Cuomo said, which would “decimate the public and safety net hospitals in the state of New York.” This amounts to $2.6 billion, which the governor called a disproportionate cut for the amount of the program that New York actually represents.

“To compare it to other states, New York would get cut $2.6 billion, California $1.2 billion, New Jersey $1.2 billion, Texas $1 billion. So you see the magnitude of the cut and the disproportionate nature of the cut,” he said. “Over the next 18 months, $1.1 billion would come out of the state Medicaid system. That is one third of the entire DSH program and again, the DSH program is the funds that go to serve the hospitals that are serving the uninsured and the poorest New Yorkers.”

“When you look at the size of this cut, $1.1 over the 18 months, $2.6 billion, there is no way the state can pick up this cost,” Cuomo said. “The state is already facing a $4 billion deficit going into next year. $4 billon deficit. There is no way we can close a $4 billion deficit and absorb an additional one billion, and then $2.6 billion cut. It is mathematically impossible.”

This cut comes on top of the separate but even more worrisome push by Republicans to repeal the Affordable Care Act via the Graham-Cassidy Senate health care bill. According to the Governor’s Office, the controversial bill would cut $18.9 billion annually from New York’s health care system by 2026 and jeopardize health care coverage for 2.7 million New Yorkers. Cuomo is calling on New York’s Congressional Delegation to fight the Senate bill, calling it “passing the buck without passing the bucks.”

“Between the repeal of Obamacare and the DSH cuts, this is a devastating one-two punch for the state of New York,” Cuomo said. 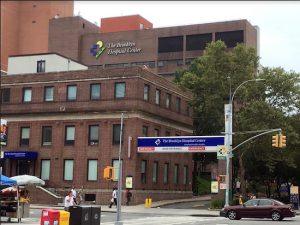 Brooklyn Growing Rapidly: The need for a modernized emergency department at The Brooklyn Hospital Center