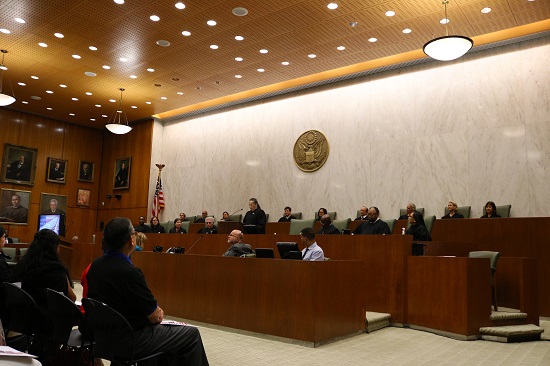 Three days after Deferred Action for Childhood Arrivals (DACA) recipients and immigrant advocacy groups protested outside Brooklyn’s federal court against President Donald Trump’s decision to wind down the program, 51 diverse men and women gathered inside the building Monday to be welcomed as citizens of the U.S.

Chief Judge Dora Irizarry welcomed the group and rows of their family members to the Hon. Jack Weinstein Ceremonial Courtroom in a special Constitution, or Citizenship Day naturalization ceremony.

“The men and women who will become citizens today and the thousands who are naturalized every year have given up everything, their countries, families and homes.” Irizarry said to the crowd. “It was hard work, hope and relentless faith in this American dream of immigrants that built this country and made it great.”

While Brooklyn’s Eastern District of New York courthouse welcomes 50,000 to 60,000 immigrants a year on 310 days, Monday’s ceremony celebrated the birth of the U.S., a country built on immigrants.

The holiday, actually celebrated on Sept. 17, commemorates the day the Constitution was signed, signifying the birth of the nation in 1787. In 2017 Brooklyn, it was celebrated by welcoming more cultures into the country.

The candidates all held their right hands up as Magistrate Judge Sanket Bulsara recited the oath of allegiance with them.

The new citizens were also addressed by a video presentation by Supreme Court Justice Sonia Sotomayor.

“It is my pleasure and delight to welcome each of you as a citizen of the United States of America,” Sotomayor said over video. “At least once a year, you should take a day to remember how hard you have worked to earn your citizenship and to provide your family with the hopes and dreams that this nation offers you.”

Given the current climate of the immigrant situation in the country, rippled with fear from the acts of a new presidential administration, Magistrate Judge Vera Scanlon’s choice of keynote speaker Paul Moses sought to provide the room with positivity.

Moses, a recently retired professor of journalism from Brooklyn College and a Pulitzer Prize-winning journalist himself, spoke to the citizens about how the stories in his book “An Unlikely Union: The Love-Hate Story of New York’s Irish and Italians” have taught him about the immigrant story.

The book tells the tale of animosity between Irish and Italian immigrants in the 19th and early 20th centuries until their history turned into one of romance with differences aside.

“We really all have an influence in the direction American society goes,” Moses said. “Certainly by being active and informed citizens, but also just from our everyday interactions we can be the ones who help erase the barriers between the people.”

When it came time to put it on paper, the candidates smiled as they returned to their seats after Irizarry presented them with their certificates of citizenship and Moses handed out pocket-sized copies of the Constitution.

The same spot where DACA immigrants fought for their rights days ago, the new wave of citizens posed for photos holding their new certificates, surrounded by family members, welcoming them to the United States of America.