Eye on Real Estate: Lady Moody's House, a street grid from the 1640s and marvelous mansions 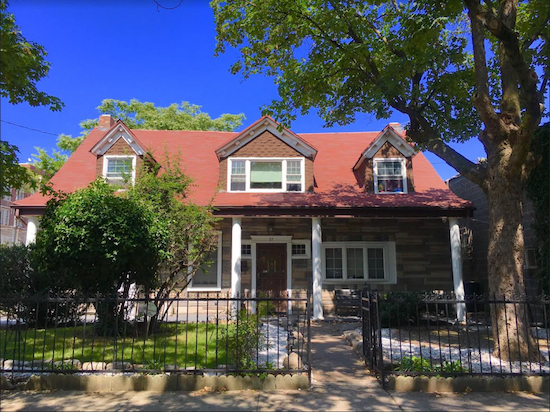 Welcome to Gravesend, where this landmark popularly known as Lady Moody's House can be found. Eagle photos by Lore Croghan
Share this:

Old and new together. The visual contrasts are fascinating.

In a single neighborhood, you can see one of Brooklyn’s oldest buildings, a street grid from the 1640s — and new mansions in a Syrian Jewish enclave.

The neighborhood is Gravesend, which was one of the original six towns of Brooklyn.

We’ve written about it before because it was stuck on the city Landmarks Preservation Commission’s designation calendar for a half-century. Then, thanks especially to the efforts of Gravesend preservation advocate Joseph Ditta, the house was granted individual landmark status in April 2016.

We’ve visited Gravesend several times, always focusing on the block where Lady Moody’s House is located and nearby Lady Moody Triangle. But recently, we realized the neighborhood is worthy of a good, long stroll because of both its new and old architectural eye candy.

Children get houses as wedding gifts

The blocks where the heaviest concentration of new mansions can be found are between East 1st Street and Ocean Parkway and Kings Highway and Avenue U. If you get there by taking the F train to the Kings Highway station, you will wind up on McDonald Avenue, where above-ground train tracks cast gridded shadows that are kinda poetic in a gritty urban way. Just a couple blocks away, there are mansions with barrel-tiled roofs on 100-foot-long lots. Ideally, you should take your stroll on a sunny day while there are still leaves on the enclave’s tall trees. They cast dappled shadows on the huge houses’ green lawns and carefully manicured shrubs.

Head first to Avenue S. There are stunning houses, especially on the corner lots. Then go to Avenue T, where there are many lovely homes, then check out the houses on regal Ocean Parkway. After that, walk up and down the numbered streets, where there are charming houses at every turn. When Syrian Jews first came to New York City in the early 1900s, initially they settled on Manhattan’s Lower East Side. Later, many moved to Bensonhurst. After World War II, they moved in significant numbers to Gravesend.

In recent years, many Gravesend home purchasers have either enlarged the houses they’ve bought or torn them down and replaced them with new mansions.

There’s a fair amount of new construction going on right now in the neighborhood. Sometimes houses in the area sell for big numbers. The Number 1 home on PropertyShark.com’s list of Brooklyn’s priciest 2016 home sales is 1993 East 5th St. It changed hands for $11.36 million.

City Finance Department records identify the purchaser as 1993 East 5th Street LLC — and indicate its address is in care of Thor Equities. Once you’ve strolled around Gravesend’s modern mansions, a good way to make the visual transition from new to old is to go see the former First Reformed Church of Gravesend at 121 Gravesend Neck Road.

It was dedicated in 1894. Its lovely parsonage at 145 Gravesend Neck Road was constructed in 1901.

You can find the eye-catching religious buildings by walking down East 2nd Street towards Avenue V and turning onto Gravesend Neck Road. Currently, the properties belong to Coney Island Pentecostal Church, Finance Department records indicate. They are used by Trinity Tabernacle of Gravesend. After that, keep walking west on Gravesend Neck Road and cross McDonald Avenue. In short order you’ll be standing in front of Old Gravesend Cemetery, a designated city landmark where it’s believed Lady Moody is buried.

Across the street, you’ll see Lady Moody’s House — which wasn’t actually her home, but was built in the early 18th century or maybe before that on land that had belonged to her.

Its formal name as a designated city landmark is Van Sicklen House because probably the builders of the house were the Van Sicklens. So. There are two important things you should know about Lady Deborah Moody, who founded Gravesend in the 1640s. She was the first woman to establish a colony in North America. And she was a champion of freedom of religion.

For a good look at the cemetery where she possibly was laid to rest, walk along Van Sicklen Street and Village Road South. A sign on the graveyard’s fence says if you want to go inside, you must call the city Parks Department at 718-646-5913 and make an appointment.