Fears of the return of dysfunction and corruption The state Senate failed to extend mayoral control of the New York City school system, making it possible that the old Board of Education system with its 32 different local school boards could return. AP photo by Bebeto Matthews.
Share this:

With the failure of the state Legislature Wednesday night to approve the extension of mayoral control of the New York City school system by the end of its formal session, the city could return to the old Board of Education system, with 32 different community school boards. The system, often dysfunctional and sometimes corrupt, was overturned by the Bloomberg administration more than a decade ago.

While the state Assembly approved mayoral control months ago, Senate Republicans have insisted on linking the extension to an expansion of the number of charter schools that can open in New York City.

Officials have until June 30 to return to Albany to undo the expiration of mayoral control — something that Speaker Carl Heastie says is not likely to happen. If not, the old seven-member Board of Education, appointed by the mayor and the five borough presidents, would have to be reconstituted, along with the 32 community school boards.

“… The people will start to plan their candidacies, money will start flowing in. [There will be] limitless potential spending by school board candidates and their various backers.” He added, “If you don’t think a union should have a big influence, well, they’ll be in heavily. If you don’t think hedge fund folks should have a big influence … Everyone is going to put a lot of money into it and it becomes a free for all.”

“It’s been 15 years since school boards existed,” Assemblymember Jo Anne Simon, a former teacher for the deaf and a Special Education advocate for years, told the Brooklyn Eagle on Friday. “That would be going back to something that people had a huge problem with. It would completely destabilize the system; there’s no time to plan.”

Simon said she was very concerned about the impasse.

“It would be very unsettling to go back to a system right now that nobody even knows. Even people unhappy with mayoral control do not want to go back to the school board system.”

A “lot of corruption” developed in the local school boards, she said. “It was more prevalent in some districts. Some were notorious, others were managed well. It was a mixed picture.

“I believe people will continue to talk,” she added.

Another Brooklyn Assemblymember, Robert Carroll, said in a statement on Friday, “The Senate said that they would only sign the extender, a policy which they claim to support, if the state lifted the charter school cap. This is in no way germane to whether or not Mayor de Blasio should have control of NYC schools. This tactic is coercive and clearly demonstrates that the Senate is not negotiating in good faith.”

Carroll said the issue couldn’t wait until the next legislative session in January.

On Thursday, de Blasio told Brian Lehrer during a broadcast interview, “God forbid we get to the morning of July 1 and Albany has not acted — well, first of all, I think there’s going to be tremendous frustration and anger expressed in this city if that ever happens. But then we would have to constitute that board … There will be no majority held by anyone – no one fully accountable.”

The cost of reconstituting the Board of Education is projected at $1.6 billion over the next 10 years de Blasio said.

“We would demand that Albany pay that if they’re forcing this on us,” he said.

“We’d have to start the election process for 32 local school boards – all of which would have the power to name their own superintendents, determine their own budgets,” he added. “A lot of the things that we now are doing in the school system that people believe in — Pre-K for All, Computer Science for All, Advanced Placement courses in every high school — all of that would no longer be universal. It would be at the whim of each of 32 local school boards, ergo I’m sure a lot of folks would lose pre-K.”

“And then unfortunately, the door opening to the kind of corruption we knew with the local school boards, which was legendary,” de Blasio added.

De Blasio said he still believed that there was “a path to yes” that wouldn’t involve the Senate compromising on the number of charter schools. 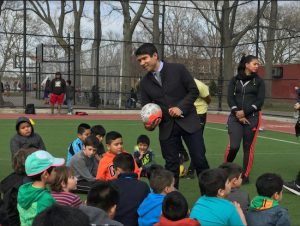