June 20, 2017 By Paul Frangipane Special to the Brooklyn Daily Eagle 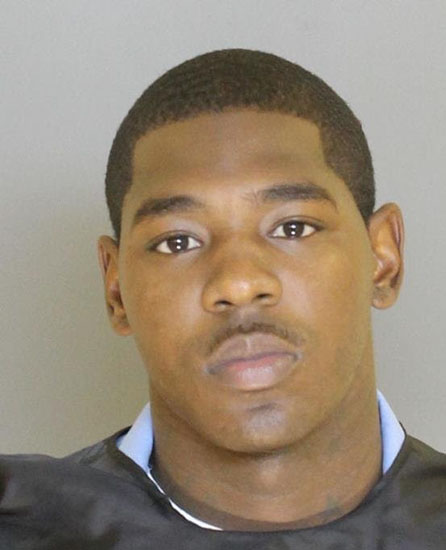 Colin Toney was sentenced to 12 years in prison on Thursday for transporting 40 illegal weapons into Brooklyn and NYC. Photo courtesy of the Brooklyn DA’s office.
Share this:

A South Carolina man with ties to the Bloods gang was sentenced to 12 years in prison Tuesday for transporting 40 illegal weapons into Brooklyn and Manhattan on the “iron pipeline,” a gun trafficking route from the South to the North.

Colin Toney, of Lamar, South Carolina, stood silent before Judge Danny Chun at Brooklyn Supreme Court as he was sentenced to 12 years in prison in less than five minutes.

Toney, 28, pleaded guilty earlier this month to criminal sale of a firearm, after he was found funneling 40 guns by car and bus from his home state to Brooklyn and Manhattan between June 2015 and Sept. 2016.

“This defendant took advantage of lax gun laws in his home state to bring dangerous weapons into Brooklyn streets,” Acting Brooklyn District Attorney Eric Gonzalez said in a statement. “The defendant will now spend more than a decade in prison for his decision to endanger lives in order to make a buck.”

Toney bought all the guns under loose southern gun laws and sold them to undercover NYPD detectives on 19 separate occasions. His girlfriend, Dedra Shantel Wheeler of South Carolina accompanied him on seven of those deals and another South Carolinian, Donte Smith, joined Toney on four deals.

Smith pleaded guilty to criminal sale of a firearm and is serving five years in prison. Wheeler’s case is still in progress.

Toney and his attorney, Michael Talassazan, did not wish to argue the sentence in court.

Talassazan said he “felt the plea agreement was fair under the circumstances.”