June 5, 2017 By Andy Katz Special to the Brooklyn Daily Eagle 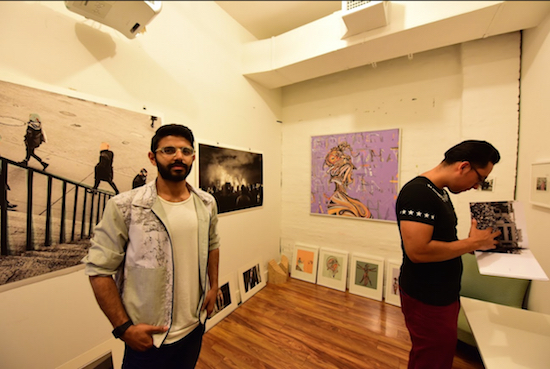 The line in Java Studios outdoor courtyard stretched all the way back to the rough brick exterior of the adjacent factory and continued on, curving to fill nearly the entire space — invitations to this night’s Greenpoint Open Studios Launch had referenced “free beer” after all. But low-cost libations were not the main subject of the night’s launch party.

Sponsored by Greenpointers.com publisher Julia Moak, Greenpoint Open Studios, which took place over the weekend, is an annual event celebrating the one-time industrial core as a center of emerging art, design and craft.

“Our people worked for months on this,” Moak explained. More than 400 artists are represented as potential patrons were given maps showing locations from the edge of the Newtown Creek at Greenpoint’s northern tip to Meeker Avenue and its southern border with Williamsburg where working artists, designers and crafters had their goods on display. In addition to individual collections, groups of artists created and displayed their work at Alter, Java Studios, The Lot Radio, Pencilworks, the Brooklyn Art Library and A/D/O.

“We’re a relatively small area,” Moak went on, “compared to, say, Bushwick, which is far more spread out. This seemed like a great way to provide exposure to the art community, rather than try to gather everything into one single gallery or museum.” Nor is Julia Moak and Greenpointers.com alone in perceiving the utility of the neighborhood’s compact geography. Art and advertising giant Saatchi Art is staging its own forum for emerging artists called “The Other Art Fair” in Brooklyn for the first time ever. And what better part of Brooklyn than Greenpoint, specifically the Brooklyn Expo Center on Noble Street?

After partaking of free beer and live music compliments of Teen Body, Jules & The Jinks, Ocho Ocho Ocho and others, guests were invited to begin their art tour within Java Studios itself. Paintings, photographs and found-art displays lined the building’s narrow hallways. Lounges with sofas and vending machines were set at opposite ends of each floor, and each open doorway seemed to lead into an aesthetic universe that reflected the mind of the tenant.

“This place is fantastic,” Ryan Rio exulted, showing visitors around his small, but very comfortable-looking Dukkha Tattoo Studio. “People here support one another. And there’s always inspiration a few feet away.”

Painter Peggy Resnick’s studio resembles a comfortable study. One half is set on a wood riser where a desk and chair sit, along with a bed for what appears to be a medium-size dog. “I bring him most days,” Resnick said. “He really helps me focus.” Instead of her dog, Resnick’s husband Stewart Fishman is on hand, sitting at the desk while his wife discusses her work with attendees. Found-object artist Tammy Rose introduces herself as “The Mousetrap Girl,” and, indeed, her mousetrap collages and wall hangings line many of halls in Java Studios. “They remind me of the iPhone,” she explained when asked about her choice of medium. “And I love the way they sound when they snap shut.”

Impressive as it is, Java Studios is only one small hub of the forthcoming Greenpoint Open Studios, which ran through Sunday evening and ended with a wrap party at Magik City, a happening beer and performance space on Box Street. Artists have a lot of work to show and hopefully sell in the meantime.

Some, in locations such as the Pencilworks, get regular foot traffic. “We’ve had maybe 40 or so people come by both days,” said Nathan Windsor, on hand to help his girlfriend Colleen Blackard show her intricate pen drawings. Riding the synergistic wave powered by Saatchi Art and Greenpointers.com, Windsor takes a moment to show off his own contribution — a chipset the size of a half-dollar piece that attaches to one corner of a work and provides reliable scanned data on its history, authorship and copyright status.

Other spots aren’t as prime. Cruising along India Street toward the East River, a bronze statue set in the road suggests there’s something more to see. Sure enough, sculptor Vera Shulman has set up shop in Bedi Makky Art Foundry. Dating from 1931, Bedi Makky boasts an impressive client list, including the Marine Corps Iwo Jima Memorial and the Wall Street Bull. Owner and second-generation caster Bill Makky explained that his shop had been approached to help complete “Fearless Girl” the controversial feminist-inspired bronze now set opposite the bull, but declined out of loyalty to artist Arturo di Modica.

Shulman’s bronzes are quirky and energetic. “They don’t have names,” she said when asked. “I’m not against names. It’s just that I don’t always know what to call them. They have to speak for themselves.”