Assemblymember says she will appeal after court setback 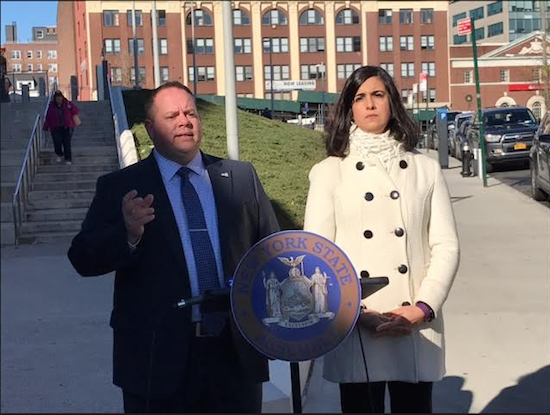 On April 7, Hon. Phillip G. Minardo of the New York state Supreme Court ruled that the de Blasio administration is within its rights to order personal records of IDNYC cardholders like names, Social Security numbers and information on immigration status, to be destroyed.

“It’s disappointing that we were ruled against based on a procedural issue of standing, as opposed to the merits of the case,” Malliotakis said in a statement. “We do disagree, and in the meantime, we have serious concerns about what this means regarding government transparency and public safety. We intend to pursue further options to prevent the mayor’s irresponsible actions that put all New Yorkers at risk.”

Malliotakis and Castorina argued that the records of applicants should be stored for public safety purposes. The records should also be subject to Freedom of Information Law (FOIL) requests.

“It is unconscionable that the city of New York would distribute nearly 900,000 identification cards, then destroy all the documents applicants used to apply for those cards. This data could be helpful in the future to investigate a crime perpetrated with the use of an IDNYC card,” Malliotakis said.  The mayor, who had argued that the records have to be destroyed to protect the privacy of IDNYC applicants, said he was pleased with Minardo’s decision.

“With this decision the state Supreme Court protected the personal information of a million New Yorkers. IDNYC was created to protect people and connect them to vital services and today’s decision ensures it will continue to do just that,” de Blasio stated.

In a warning to Malliotakis and Castorina, the mayor stated that his administration is ready for battle should the two elected officials try to take him back to court. “We applaud the ruling and will fight any attempt to appeal it,” he said.

“This decision, which protects New Yorkers’ personal data, validates what we’ve known from the beginning: that all residents, regardless of their gender identity, permanent address or immigration status, deserve access to all of our city’s critical resources. Over one million New Yorkers have helped make IDNYC the largest and most successful municipal identification card program in the nation. We commend the court for its decision and will do everything in our power to fight any attempt to appeal it,” the statement reads.

For Malliotakis and Castorina, the court ruling represented a disappointing defeat.

The two lawmakers won a hard-fought victory on Dec. 7 when the state’s Appellate Division upheld a temporary restraining order on the city to prevent the records from being destroyed.

Minardo ordered that the restraining order will remain in place until April 17 to give Malliotakis and Castorina the opportunity to file an appeal.