Iconic Western Actor Was Born and Raised in Bay Ridge 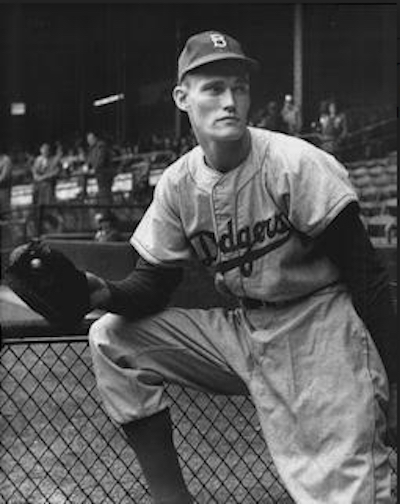 Chuck Connors during his stint at first base with the Brooklyn Dodgers in 1949. Photos courtesy of ourchuckconnors.com
Share this:

Many people may be surprised to learn that actor Chuck Connors, best known as the star of the hit TV series “The Rifleman,” grew up in Bay Ridge. The show, which ran from 1958 to 1963, still lives on in reruns decades after its finale.  Connors played the iconic role of sharpshooter Lucas McCain, the widowed Civil War veteran who moves to the fictitious town of North Fork, New Mexico Territory to raise his young son Mark, played by actor Johnny Crawford.

The show allowed Connors to demonstrate his rapid-fire skills with a Winchester rifle. Although Connors appeared in a number of TV series and movies during the 50s, including a major role in the 1958 Disney classic “Old Yeller,” it was “The Rifleman” that ultimately brought him fame and recognition.

He was born Kevin Joseph Aloysius Connors on April 10, 1921, in Bay Ridge, and his entire youth was spent in the borough. His parents had emigrated from Newfoundland, and they struggled to make ends meet in Bay Ridge. They lived in three different houses in the neighborhood.

Connors was raised Roman Catholic and attended Our Lady of Perpetual Help Basilica School in Sunset Park. He played baseball for the Bay Ridge Boys’ Club as a member of the Bay Ridge Celtics and was a lifelong fan of the Brooklyn Dodgers, even dreaming of one day playing for the team.

Connors attended Manual Training High School (now John Jay) in Park Slope. His athletic ability earned him a scholarship to Adelphi Academy, a private high school at 8515 Ridge Blvd., where he was a star athlete. After graduating from Adelphi, he attended Seton Hall University in South Orange, N.J. With America entering World War II, Connors left college in 1942 to enlist in the Army. Upon his discharge from the service, he focused once more on sports and played for major league baseball and basketball teams. He was a member of the Rochester Royals basketball team from 1945 to 1946, and in 1946 he joined the Boston Celtics basketball team, with whom he remained until 1948.

Connors fulfilled his childhood dream when he served a short stint with the Dodgers. He played first base in the Dodgers’ farm system (the Montreal Royals). According to The New York Times, “He had one at-bat in Ebbets Field but haplessly hit into a double play, and he was promptly sent off to Montreal.” He also played with the Los Angeles Angels and the Chicago Cubs for one season each before returning to the minors. He eventually ended his baseball career due to physical injuries he had suffered throughout the years.

Connors was discovered by an MGM casting director in 1951, who helped land him his first role as a police captain in the 1952 movie “Pat and Mike,” starring Spencer Tracy and Katherine Hepburn. In 1953 he appeared with John Wayne in the film “Trouble Along the Way,” and that same year, he was in “South Sea Woman,” starring Burt Lancaster.

But it was “The Rifleman” that brought him into American’s living rooms every week and helped make him a star. He also starred on the TV series “Arrest and Trial” with Ben Gazzara, which ran from 1963 to 1964; and the cult favorite “Branded,” in which he portrayed Jason McCord, a U.S. cavalry captain who was forced to leave the service because he was falsely accused of cowardice. In 1977, Connors appeared in the landmark TV mini-series “Roots,” in which he played the brutal and ruthless slave owner Tom Moore. The role earned Connors an Emmy nomination.

His last role was in the 1991 TV movie “The Gambler Returns: The Luck of the Draw,” starring Kenny Rogers as the title character. The movie featured a number of classic western TV stars including Connors and Johnny Crawford reprising their roles as Lucas and Mark McCain. Connors died on Nov. 10, 1992 in Los Angeles. The Brooklyn native was married three times and had four sons.

“Adelphi Academy of Brooklyn is proud to count a number of accomplished athletes and celebrities among its distinguished alumni, dating back to the Academy’s founding in 1863,” said Romanos. “Kevin ‘Chuck’ Connors excelled as a member of the Adelphi Panthers Boys Varsity Team during his time at the academy and later went on to achieve stardom as a professional athlete and Hollywood performer. His accomplishments are still celebrated at Adelphi, serving as an inspiration to student-athletes and members of our acclaimed Theater Arts Program alike.” Born in Brooklyn: Late comedian Joey Adams would be 106