John Quaglione and his sister, Lauren Giannone, take part in the March for Babies every year to raise awareness of the need for services for premature infants. Photo courtesy of John Quaglione
Share this:

A Bay Ridge City Council candidate who donates his spare time to raising money for the March of Dimes is endorsing a proposal that would give mothers of premature babies easier access to breast milk donated by other moms.

John Quaglione, co-chairman of the Brooklyn Chapter of the March of Dimes New York, said a plan to have New York state allow Medicaid to cover breast milk the same way baby formula is covered has been stopped in its tracks in Albany. He is calling on the City Council and the city’s Department of Health to pick up the proposal and run with it.

“This proposal would have allowed Medicaid coverage of breast milk as formula, donated to milk banks, to foster the healthy development of babies born too early. We have to help mothers who cannot produce breast milk and families who cannot afford it for their newborn. The last thing we want is for those who need it to be forced to turn to cheaper, unregulated sources. We already have milk banks throughout New York City, so it makes perfect sense for the city to partner in an effort to magnify the positive results,” Quaglione said in a statement.

Quaglione and his wife Kerry have two daughters, both of whom were born prematurely.

Quaglione and his wife Kerry participate every year in the March for Babies walk-a-thon in Manhattan to help raise money for the March of Dimes, the nationwide organization founded in 1938 to help infants with birth defects.

At the 2016 march, the Quagliones and their friends raised nearly $5,000. John’s sister Lauren Giannone is among those who participate.

The Quagliones call their group “Team Natalie” after their older daughter, Natalie Grace, who was two months premature when she was born in 2011. The couple has a second daughter, Olivia.

After Natalie Grace was born, John and Kerry Quaglione had to visit her in the neonatal intensive care unit at New York Methodist Hospital, where she was kept in an incubator. The loving care that Natalie Grace received at the hospital, along with the emotional support they were given by the hospital’s staff, is something the couple will always remember, John Quaglione said.

The Quagliones decided to give back by raising money for the March of Dimes.

The couple will be participating in the fifth March of Babies on April 30. 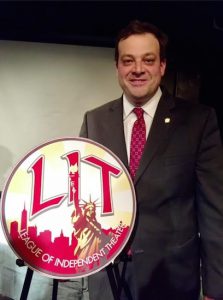