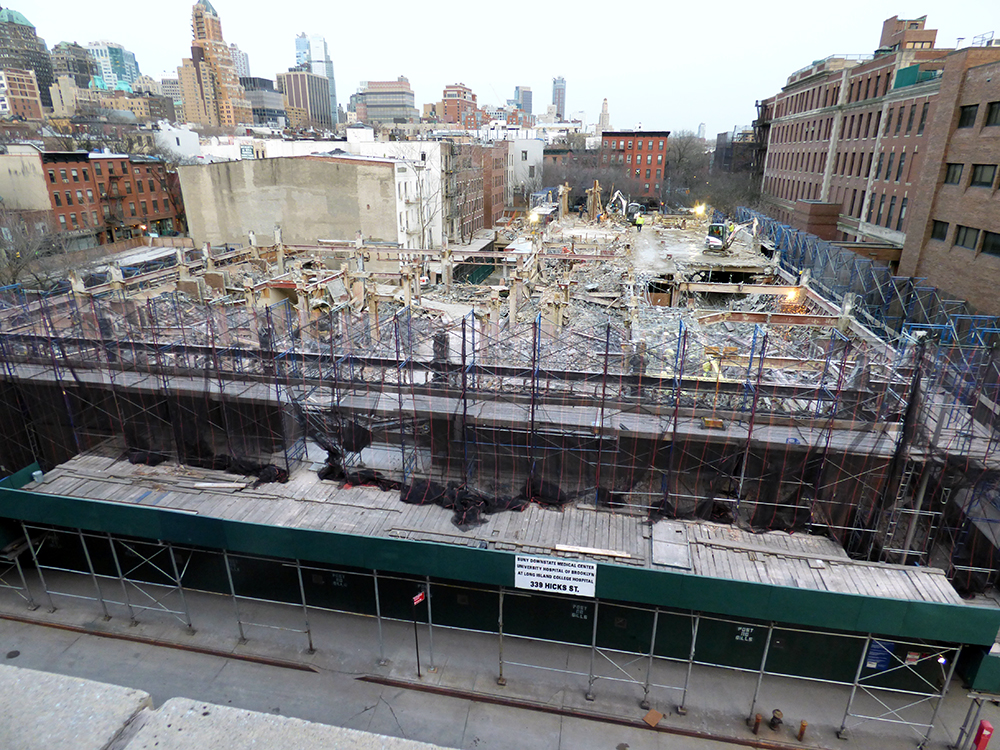 It’s bad enough, neighbors say, that enormous, out-of-context development is changing the character of their low-rise neighborhood. Now, Cobble Hill residents complain they are being shaken awake early in the morning by noisy demolition at the former Long Island College Hospital (LICH).

After Hours Variances (AHV) have been issued to developer Fortis Property Group allowing late-evening and early weekend construction at 339 Hicks St., according to the city’s Department of Buildings (DOB).

Neighbors have complained to the Cobble Hill Association that Fortis contractors have even disregarded the variances’ rules and started work as early as 5 a.m.

On Friday, six officials representing the neighborhood sent a letter of complaint to DOB about the after-hours permits and to also note other unsafe conditions at the site.

On top of this, demolition is also underway at 347-349 Henry St. and 112 Pacific St., adjacent to the Cobble Hill Historic District, surrounding residents with a wall of disruption.

“Where we had LICH there’s now a developer that thumbs its nose at the community to pursue out-of-context development,” Sen. Squadron told the Brooklyn Eagle. He added, “It’s no surprise that it has already caused safety concerns, noise and traffic impacts, and complaints about off hours work. I hope the city works with us to address these serious issues.”

“Our community has complained of weekend and after-hours demolition and construction where excessive noise and airborne debris have been reported coming from 339 Hicks St.,” Amy Breedlove, president of the Cobble Hill Association, told the Brooklyn Eagle.

“There are parks and playgrounds, as well as residences, that have been heavily impacted. In December the CHA received a tremendous number of complaints,” she said.

The concerns include Fortis properties on the east side of Henry, Pacific and Amity streets, she said, with complaints including sites left open and unlocked at night and weekends.

The entrance to the 347-349 Henry St. site “has frequently been open or unlocked on evenings and weekends when no construction is taking place,” officials confirmed.

In late December, Fortis filed plans with the city’s Department of Buildings to build a 28-story, 110-unit apartment building at 339 Hicks St., between Atlantic Avenue and Amity Street.

The filing shows a pool and fitness room on the building’s lower level along with a bicycle storage room, two floors of residential amenity space, a roof terrace on the 20th floor and a full-floor penthouse.

That was the third filing for towers on the former hospital’s 20-building campus.

Fortis filed plans earlier in December to build a17-story tower at the site of a seven-story garage at 350 Hicks St. at the corner of Atlantic Avenue.

Fortis is allowed to build the towers in the low-rise neighborhood because long ago the hospital campus was left out of the historic district as a community benefit.

Fortis bought the historic hospital campus from SUNY for $240 million after a protracted legal battle with numerous community organizations and local officials. After presenting two versions of its development plans to CHA, the company decided to move forward with the as-of-right version, which does not require rezoning.