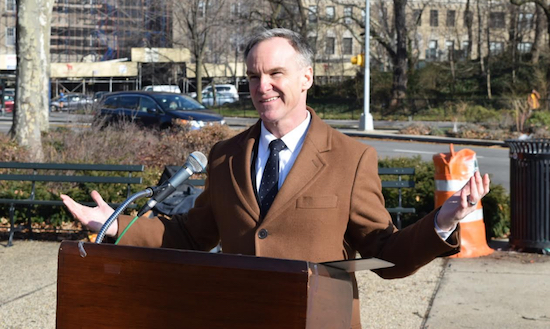 Marc Fliedner, the former chief of Major Narcotics Investigations Bureau under Charles Hynes, and chief of the Civil Rights Bureau under Ken Thompson, officially announced that he is running for district attorney in Brooklyn during a press conference on Thursday. Eagle photo by Rob Abruzzese

Acting District Attorney Eric Gonzalez has already jumped out to a big lead in Brooklyn’s burgeoning DA race, but another hat has officially been thrown into the pile on Thursday when Marc Fliedner officially declared that he is running for the office.

“I am Marc Fliedner and I am officially declaring that I will run for district attorney in Brooklyn,” Fliedner said in front of a small crowd gathered at Grand Army Plaza just off of Flatbush Avenue.

Fliedner served as an assistant district attorney in Brooklyn under Elizabeth Holtzman from 1987 and continued under Charles Hynes until 1992. After working for the Monmouth County Prosecutor’s Office in New Jersey, Fliedner returned to Brooklyn to work as an ADA from 2006 until June 2016 when he resigned from the DA’s office as head of the civil rights bureau to open a solo civil rights practice.

Fliedner is probably best known for prosecutions of Police Officer Peter Liang, who shot and killed Akai Gurley in Nov. 2014, and Police Officer Joel Edouard, who was convicted for stomping on the head of a handcuffed suspect.

He is also the subject of an ongoing investigation into proprietorial misconduct involving a case of his that was overturned by the DA Office’s Conviction Review Unit because of missing and doctored evidence in the Wayne Martin double homicide case.

Fliedner is running as a progressive in the race and has not been shy to take shots at the current administration — formerly under Ken Thompson and currently under acting DA Eric Gonzalez — as “out of touch” and he even blasted other potential opponents during his press conference on Thursday without naming names.

“You don’t need a rich celebrity TV star who is scooping up money right now and thinking about what public office would be a fun toy for him to play with next,” Fliedner said. “You don’t need professional politicians who pick their job as the next way to earn a living off of the government dole. You need people who are handed support during backdoor meetings that you were not invited to. And you don’t need someone who was handed this job and is now sitting up there in that marble building asleep at the wheel. You need courage.”

During his stump speech on Thursday, Fliedner outlined a number of changes that he sees himself making in the office if elected. He suggested splitting the Civil Rights Bureau into two parts, one to handle hate crimes and the other to handle allegations of misconduct committed by law enforcement officers.

He also suggested creating a Vehicular Crimes Bureau to go after drivers who kill and injure pedestrians, a Civil Disobedience Case Review Bureau to more efficiently handle those arrested in organized marches, or “acts of civil disobedience.” He would also split the Gangs and Narcotics Trafficking Bureau and create a Firearms and Narcotics Trafficking Bureau that will aggressively pursue people who bring guns into Brooklyn from outside the state.

Fliedner also suggested the creation of programs that work with middle- and high-school-aged students — one to show the link between bullying and crime, and another called the “Counsel of Young Civil Rights Leaders” that would bring in and work with high school students.

Aside from Fliedner and Eric Gonzalez, Patricia Gatling, former ADA under Charles Hynes, has also officially announced that she will seek the position. Others expected to run include former ADA Anne Swern; Ama Dwimoh, who serves as special counsel to Borough President Eric Adams; and Arthur Aidala, another former ADA and immediate past president of the Brooklyn Bar Association.