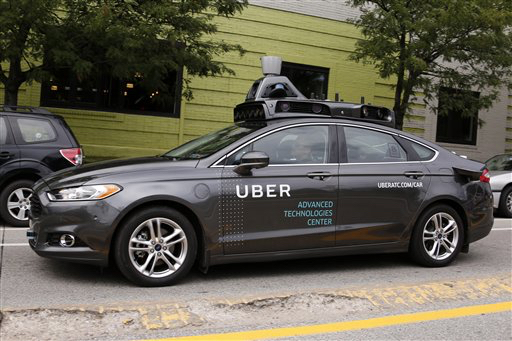 A self driving Uber car drives Liberty Ave. through the Bloomfield neighborhood of Pittsburgh. AP Photo/Gene J. Puskar
Share this:

Uber announced on Monday that it purchased an NYU Tandon startup that will serve as the basis for the driving company’s AI (artificial intelligence) Labs. The startup, Geometric Intelligence, which was founded in 2014, is focused on developing revolutionary systems in machine learning and other areas of artificial intelligence.

At MIT Technology Review’s EmTech Digital conference in May, Geometric Intelligence CEO Gary Marcus, a professor of psychology and neural science at NYU, spoke about the limits of today’s AI, referring to self-driving cars as an example. The cars need to be prepared for all sorts of driving conditions, he said, which could be difficult to find all in one place. The unpredictable activity form passersby also pose a problem. Many hope that the partnership between Uber and Geometric Intelligence will bring the auto industry one step closer to successfully developing self-driving cars.

“The Geometric Intelligence acquisition is a two-part validation of the artificial intelligence startup ecosystem,” says Steven Kuyan, managing director of NYU Tandon’s Data Future Lab. “First, it shows that established companies are cognizant of AI startups and understand that despite having access to talent, startups are the niche expertise that can’t be developed internally. Second, artificial intelligence now has the necessary infrastructure in place to allow even novice developers to have access to AI resources and programs like the AI NexusLab (which supports pre-incubation companies) to support their entry to the marketplace.”

Along with Geometric Intelligence, the university also hosts a broad range of tech startups and the AI NexusLab, which focuses specifically on artificial intelligence.

As part of the acquisition, the startup’s small staff of 15 will move from NYU Tandon’s Data Future Lab to Uber’s San Francisco headquarters.