The Brooklyn ‘Blue Blood’ from Bensonhurst 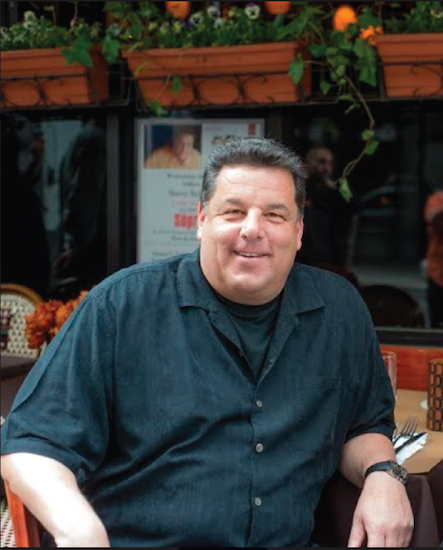 Steve Schirripa has really done it all: he’s starred in movies and hit television series, written books, worked in radio and performed before a live audience. Not too bad for a boy from Bensonhurst.

One of Schirrpa’s first jobs was as a bouncer at Paul Anka’s nightclub Jubilation. He was also maître d and then entertainment director at the Riviera Hotel in Las Vegas, where got the opportunity to meet and work with many celebrities and performers, including Rosie O’Donnell, Ellen DeGeneres and Drew Carey. Those connections led to appearances on television and eventually helped land him a small role in Martin Scorsese’s “Casino.”

In 1999, Schirripa landed a role in HBO’s “The Sopranos,” one of television’s most revered series. And the rest, as they say, is history.  Since then, he’s been active in all forms of entertainment. While it may be hard to imagine this man of action — who has played larger than life characters on screen — sitting down and slaving over a keyboard writing books, he’s done precisely that. In fact, his latest book, “Big Daddy’s Rules,” is a New York Times best seller, as are his other works.

From mobster Bobby “Bacala” Baccalieri in “The Sopranos” to detective Anthony Abatemarco on “Blue Bloods,” you can’t find two more diverse characters, and that’s a testament to Schirippa’s talent. He has become one of today’s finest character actors.

Schirripa is married to Laura Schirripa and they have two daughters, Ciara and Bria. He recently took the time to speak with the Brooklyn Eagle about his long and illustrious career.

Below are excerpts from the Eagle’s conversation with Schirripa.

Eagle: You are an acclaimed actor, producer, a New York Times bestselling author, and now you have your own successful brand of Italian foods — Uncle Steve’s Italian Specialties. Tell us about Uncle Steve’s.

Schirripa: We’ve been in business now about two-and-a-half years. My mother had just passed away when a friend of mine from Brooklyn said, “Let’s do something for your mother.” So we got my mother’s recipe, and because my wife is a marathon runner and eats organic, we made the sauce organic.

So we started out not quite sure what to do with it, when suddenly it took off. It’s also gluten-free and non-GMO. If you didn’t know it came out of a jar, you would never know it. Now we’re in 2,500 stores. We sell it in Brooklyn in Whole Foods, Fairway, Stop and Shop, Shoprite, Key Food, Foodtown and various delis throughout the borough. We also have a website and we just signed on with Fresh Direct, and we’re all over the country.

Eagle: I love your new book, “Big Daddy’s Rules: Raising Daughters is Tougher Than I Look.” As a father of two daughters, I can certainly relate to everything you write in the book. It has been praised by Jon Stewart, Whoopi Goldberg and Ray Romano, to name a few noteworthy humorists in their own right. What motivated you to write books?

Schirripa: Well, my first book, “A Goomba’s Guide to Life,” came by accident. It was a New York Times bestseller. It came to me in 2002.  I always thought it would be a great thing to write a book, and that it would be a huge accomplishment. The book did really well and we made the New York Times bestseller list. And so I got a deal for two more books, “The Goomba’s Book of Love” and “The Goomba’s Diet.”

I sold the book to Nickelodeon and we turned it into a kids’ movie, which is one of the things I’m most proud of.  And then there was another Nicky Deuce book. I had vowed not to write another book, but I just had this idea about my two daughters and my strong opinions about raising kids, and that became “Big Daddy’s Rules,” another New York Times bestseller.

Eagle: How do your daughters feel about being the subject of your book?

Schirripa: I let them read it once and I let my wife read it one time. The girls didn’t have any problem with it; the story needs to be told.

Eagle: You do a lot of work for charity, including the Lollipop Kids Foundation, and Master of Ceremonies at various functions. It must be very gratifying to be able to help with these causes and to know that you are in such high demand to host such events.

Schirripa: Well, you know, I really like helping. There are some great charities, and there are some I’ve found out along the way that aren’t so great. I like the ones where the money goes where it’s supposed to go. And I found a few like that. Lollipop was started by a friend of mine from Brooklyn. They help kids who are in the hospital, terminally ill kids, they show them first-run movies. There was another Brooklyn children’s charity called Capp that I was involved with. I ran their auction. I was at a recent even for St. Jude’s. I always try to help when I can, especially when it involves kids.

Eagle: In your book you talk about the struggles you had growing up poor in Bensonhurst and how you vowed to never let your children endure what you had to endure.

Schirripa: I grew up on Bay 11th and Benson in a corner house. I grew up on welfare. We were five kids, and my father didn’t work. My father was small-time hood. He tried to get into the real world, and that didn’t work. Both my parents grew up in Brooklyn. My mother was a great woman. She was adopted and raised by my grandmother on Bay 23rd. It was my mother who kept us on the straight and narrow. My father was in and out, and to be honest, I don’t even know if he knew what was going on.

I went to Dyker Heights Junior High. My sister and I both graduated college. I played basketball at Brooklyn College. I was a captain my last three years. Sports kind of kept me out of trouble. Brooklyn was different back then. I think Brooklyn’s great now, and it’s a great place to be from, for sure. While I was at Brooklyn College I worked as a chimney sweep, and as a result, I got to see other parts of Brooklyn I had not been familiar with, and I got to see those old beautiful houses in Flatbush and the brownstones in Bed-Stuy.\

I still come to Brooklyn. My daughters went to school at Poly Prep. When they wanted to go there I was very happy about that, because it’s a beautiful place. Eagle: You had a role in Martin Scorsese’s 1998 classic “Casino.” How did that come about?

Schirripa: For “Casino” I got to read with (Robert) De Niro and Scorsese. It was a little surreal. I had a conversation with them and I ended up getting a couple of lines in the movie.

Eagle: In 1999 you landed the part of Bobby “Bacala” Baccalieri on “The Soprano’s.” You played Tony Soprano’s brother-in-law on the show. After your TV wife Karen died on the show, you eventually wed Tony’s sister Janice. How did you land that part?

Schirripa: Well, I had started getting other small parts, and I called my wife and told her, “I really think I can do this.” Then I got an agent, and he offered to help me. A few months later, I came to New York for a wedding, and they sent me the material and they wanted me to come back in a week. I remember I stayed at the old Gregory Hotel in Bay Ridge and I went to the audition. About 100 people read for this role, and I thought, what chance do I have, seeing all these famous actors trying out for the part. I worked hard on the material and went in and I read for David Chase (writer and producer of “The Sopranos”).  And they called me the next day [to say] that I had the role. I was on the show from 1999 to 2007. I came in the second episode of the second season. That’s when I moved my family back to New York.

Eagle: Did you sense that you were part of a cultural phenomenon at the time?

Schirripa: No, no one knew. It was becoming very popular, and it was the first cable show to be nominated for and win an Emmy award. It was a once-in-a-lifetime thing.

Eagle: Were you very close to your “Sopranos” cast mates?

Schirripa: We all became close friends. We worked together and became like a family. We went through marriages, divorces and children being born. We were very much a family. We all knew each other well and vacationed together. James Gandolfini and I were very close. Nicky Deuce was one of his last movies. He was in Los Angeles. We were shooting the movie in Montreal and I called him and asked him to be in it. He got on a plane at three in the morning and flew out to Montreal, did his part and left.

And Michael Imperioli [who played Christopher Moltisanti] and Tony Sirico [Paulie “Walnuts” Gualtieri], another Brooklyn guy are my friends. Tony is in the new Woody Allen movie with me that we’re shooting in Coney Island. I made a lot of great friends on that show, and I just feel lucky to have been a part of it.

Eagle: “Blue Bloods” is one of my favorite shows. It’s set in my neighborhood of Bay Ridge. You play Detective Anthony Abatemarco, an investigator who works with Police Commissioner Reagan’s daughter Erin. What is it like being on the right side of the law after so many years on “The Sopranos?”

Schirripa: We shoot “Blue Bloods” in Greenpoint. That’s where the studios are. It’s a great show. I play a DA investigator and I work with Bridget Moynahan, who plays the DA, and she is a terrific actress. She is just great, and I’m happy to be there. We just clicked from the first episode I appeared in. I’ll be around a lot more this season. I did eight episodes last season, and I should do double that this year. It’s just a great family show. Schirripa: I love to go to L&B Spumoni Gardens for the best pizza in the entire world. I really like Gino’s, Elia’s Greek restaurant, New Corners and Chadwick’s in Bay Ridge. I also like Vinny’s of Carroll Gardens, Purbird in Park Slope and Randazzo’s Clam Bar in Sheepshead Bay for clams and calamari.

Eagle: Do you still have family and friends in Bensonhurst, and do you ever go back to visit?

Schirripa: No, I don’t have any family there now. My mother, who passed away, had moved to Jersey. No, everyone moved out. But I do have very close friends that I grew up with who still live there. So I’m always around. I always come back to Brooklyn.