DOT’s Trottenberg calls for NYC to ‘think big’ about transportation NYC Department of Transportation (DOT) Commissioner Polly Trottenberg said the city has to “think bigger” about mass transit. She made the remark during her keynote address on Thursday at the Brooklyn Chamber of Commerce’s Newsmakers event.

Trottenberg said officials should consider the establishment of a system like California’s, where counties are allowed to pass their own sales taxes and use those to fund transportation.

“L.A. is building five different lines,” she said. “They’re going crazy with big, new investments in mass transit. A lot of us think that that’s what we need to be thinking about here.”

‘I don’t know where the hell my car is!’

Trottenberg brought a uniquely Brooklyn perspective to her early morning talk, where she was introduced by Chamber President Carlo Scissura and Keith Bray, Brooklyn Borough Commissioner. The event was held at NYU Tandon School of Engineering in Downtown Brooklyn, and sponsored by Investors Bank in partnership with NYU Tandon and the Downtown Brooklyn Partnership.

“This morning we had a true Brooklyn experience,” she told a capacity audience of business leaders and officials.

“They’re shooting in our neighborhood the show ‘Billions’ — you may have seen it, it’s got Paul Giamatti in it,” said Trottenberg, who lives with her husband in Park Slope.

“Somehow, my car has disappeared.”

As the implications of the DOT Commissioner’s car disappearing off the city’s streets sank in, the crowd laughed incredulously.

Trottenberg said that she searched on Lincoln Place, where she was told her car would be, but it was not there.

“So listen, it’s a beat up Honda Civic hybrid, with a bunch of bumper stickers that are kind of falling off,” she said. “So if you see it, call me, okay? ‘Cause I don’t know where the hell my car is.”

UPDATE: on Friday, the Mayor’s Office of Media and Entertainment denied that Trottenberg’s car was towed because of filming.

“While Billions is in fact filming in the neighborhood, there was no towing related to this filming—of her car or any others,” a spokesperson said. “Any other questions about the Commissioner’s car should be directed to DOT.”

(The Eagle hopes to get to the bottom of this issue.)

Trottenberg said that DOT has just released its five-year strategic plan, which focuses on the “incredible growth that is happening in New York, and nowhere more so than in Brooklyn.

The city’s challenges include congestion on city streets, crowds on the subways and “how do we ensure that people can walk and bike safely as the roadways are congested,” she said.

“Subways haven’t been this crowded since back during WWII,” Trottenberg said, noting that the system carries close to 6 million riders a day.

After the “usual initial theatrics,” Mayor Bill de Blasio and Albany “came up with a very robust five-year [$27 billion] capital plan, including an unprecedented commitment of $2.5 billion from the city,” she said.

In return, the city asked for improvements that would benefit local riders, including speeding up CBTC (Communication-Based Train Control) to allow more trains carrying more people; station upgrades; and connecting two stations, the L station and the 3 Train station at Livonia. The MTA is also studying a new subway line down Union Avenue, extending the 4 Train, Trottenberg said.

But more needs to be done. “It’s time for the city to really start thinking a little bigger,” she said.

She also said the agency is planning in advance for closing down the Canarsie tunnel for long term repairs.

“The public and officials all came together and decided we’d better rip that bandage off quickly,” she said.

“We recognize it’s going to be immensely challenging for the residents and businesses in Williamsburg and also potentially on the Manhattan side. So we are looking at all kinds of different approaches,” she said. “We’re doing very detailed traffic analysis right now; we’re thinking about specialized bus routes going over the Williamsburg Bridge to 14th Street and what we can do to provide more ferry service. For those who are right in the heart of Williamsburg and a little further out, [we’re thinking about] how we can increase subway service to them. And something we just announced — a protected bike lane on Delancy Street.”

As an example of “thinking big,” Trottenberg touted the proposed 16-mile, $2.5 million street car line along the Brooklyn – Queens waterfront where there has been “phenomenal” growth.

“Population growth, growth at Industry City and the Navy Yard, all these exciting new tech ventures. We also have a large population of NYCHA residents who we’d really like to better connect to jobs and opportunities,” she said.

“We’ve had some great lively meetings,” she said. “Some people love it, some people have understandable questions about it — congestion, parking lots, gentrification, are some of the issues,” along with nitty-gritty questions about car storage, financing and more.

The MTA has some federal Hurricane Sandy money that has a deadline attached, she said.

“We are moving as fast as we can on the BQX but we need to do it right.”

The city has also been thinking big about cycling, she said, adding that she considers Brooklyn to be the “epicenter” of bike use in the five boroughs.

“We have been building out the bike network,” she said. DOT will create 75 miles of new bike lanes in New York City this year, with 18 of them protected.

Trottenberg confirmed that the city was carrying out an engineering feasibility study to assess the viability of adding pedestrian and cycling space to the Brooklyn Bridge.

“There were 60 million tourists last year visiting New York City, and all of them went on the Brooklyn Bridge, took selfies and left those stupid locks,” she joked.

“We’ve expanded Citi Bike, but we’re still working on the station placement,” she added, referring to the controversies that have erupted over the placement of stations in front of residents’ buildings and businesses.

She joked that Brooklyn Borough Commissioner Bray “will be happy to talk to you about it.”

On Wednesday night, police were called to a Community Board 6 meeting after some attendees disrupted the meeting over incoming stations, according to Park Slope Stoop. CB6 residents have circulate a petition to reduce the number of bike stations.

She also described the city’s plaza program, where DOT works with organizations to create neighborhood plazas on underused streets. The idea is to ensure that all residents live within a 10-minute walk of “quality open space,” according to the DOT website.

Trottenberg said that 23 plazas are in place, with another four on the way, in neighborhoods like Bushwick, Brownsville, East New York and Downtown Brooklyn. The plazas have become a “thriving” area for businesses and have benefited Shake Shack and Hill Country BBQ, she said. Along with the mayor’s program to reduce traffic fatalities, Vision Zero, the City Council is considering the Right of Way Act, in which traffic would be required to yield the right of way to pedestrians when the crossing signal displays either a steady walking person, flashing upraised hand, or flashing upraised hand.

DOT is also transforming the city’s most dangerous intersections, including the intersections of Atlantic and 4th avenues and Tillary and Adams streets, with safer medians and other improvements.

Regarding complaints by cyclists that Vision Zero wasn’t working for them, Trottenberg said, “We grieve very much for the cyclist fatalities we’ve seen this year. It makes us want to redouble our efforts …

While streets are more congested and subway and bicycle ridership is up exponentially, bus ridership has declined to 2.5 million riders a day, she said.

“We think there’s a lot the city and MTA can do to help remedy that.”

She described the city’s new select bus lines, including one on Utica Avenue, off-board fare collections, all-door boarding, dedicated bus lines and other initiatives designed to improve service and speed.

“Transportation is one of the largest issues facing our members and the Brooklyn community as a whole, and I think it’s great that the Chamber is providing Brooklynites with access to the commissioner and transportation advocates,” said Brooklyn Chamber Board Chair Denise Arbesu. 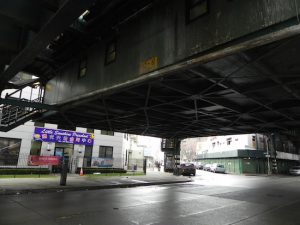