August 15, 2016 By Andy Katz Special to the Brooklyn Daily Eagle Coney Island is New York City’s living museum. It’s the place to see people scarf hotdogs for Uncle Sam, wiggle free from straightjackets, hustle out-of-town rubes into playing sideshow games and display more flesh than the public good warrants, just as it has been for the past century. And now, it’s the place to watch a disparate group of men revive a pastime that many Americans have only referenced in vintage movies or faded black and white snapshots.

It’s a little after 9 a.m., and already the air on 12th Street in Coney Island between Deno’s Wonder Wheel and the Steeplechase roller coaster simmers as the Northeast’s heat wave spills over into the weekend. The Brooklyn Stickball Team and East Harlem Stickball Team have two seven-inning games scheduled for this, the very first Brooklyn Stickball Challenge, but the weather is plainly not on their side, and no one is sure how far into the schedule they’ll manage.

“Guys, what are you doing?” Brooklyn Stickball captain Jay Cusato demands as the team huddles briefly before lining up to bat. “We gotta get hits. We gotta score runs!” he insists, clapping his hands for emphasis as the first batter approaches home plate, a rough chalk drawing in the center of the street. Today’s batting style, “fungo,” requires the batter to carry his own ball — called a “spaldeen” because players originally used Spaulding pink rubber balls — and drop it before swinging on the bounce.

“We get two swings in Brooklyn,” Carlos Diaz, 65, explains. “Bronx rules are different.” He displays two variations of the modern, purpose-made spaldeen. One, actually manufactured by Spaulding, is a bit livelier on the bounce than the Bronx Toys version.

“This is a game of improvisation,” Diaz explains, pointing out that there is no rule about the stick’s diameter. “Some guys use pool cues, cut-off hockey sticks, whatever.” Even with the apparent benefit of controlling their own spaldeen, a good number of batters on both sides manage to strike out.

Play pauses from time to time as vehicles use 12th Street for its intended purpose — bringing food and supplies to boardwalk businesses opening to serve the growing number of beachgoers. Proximity to the ocean offers little relief from the growing heat, but the players, a fair number well into their second half-century, persist. The scoreboard — a chalk grid on the sidewalk adjacent to home — fills out. 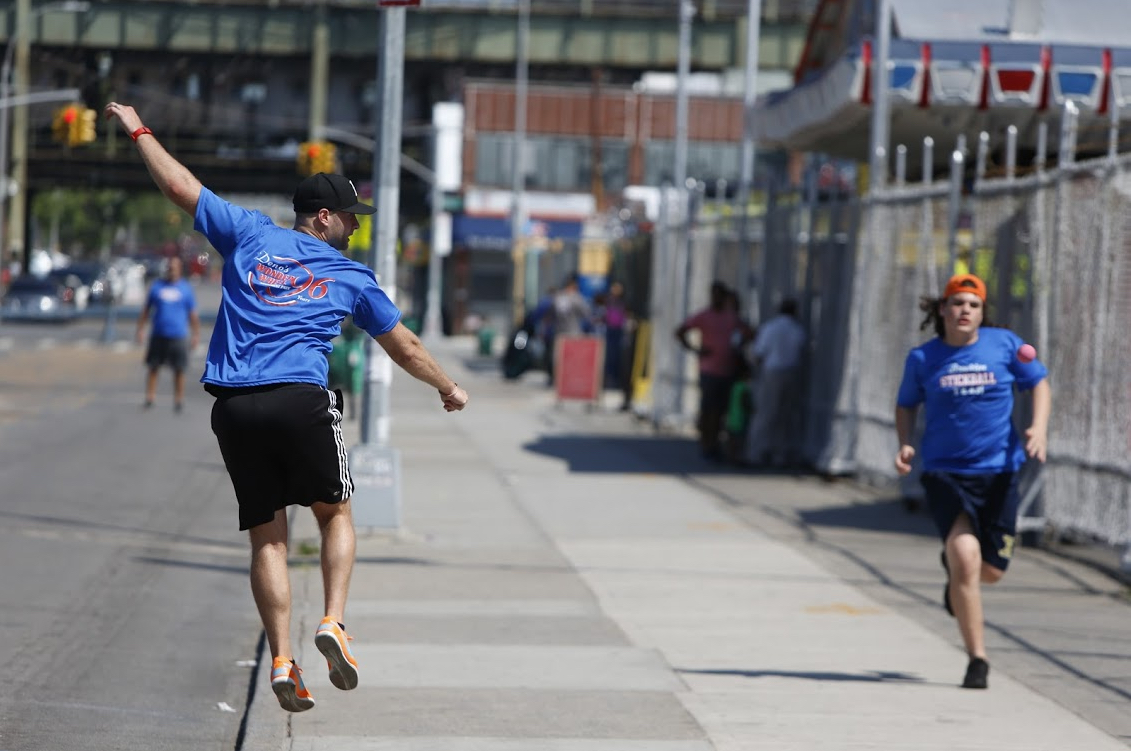 Shortly before noon the teams approach, shake hands and congratulate one another before posing for a couple of group shots in front of Deno’s Wonder Wheel.

“We had something like 14 errors on the day,” East Harlem player Joe McKenzie of Park Slope said, shrugging. “And they had some solid hitting.”

“Tomorrow we’re going to New Jersey,” said Diaz, who is also president of the East Harlem Stickball Hall of Fame. “Introduce stickball to some of the kids there.”

With Brooklyn’s Borough Hall declaring Sunday, July 10 to be Official Stickball Day; filmmaker Jay Cusato showing his stickball documentary, “When Broomsticks Were King;” and hall-of-famers like Carlos Diaz traveling throughout the U.S. and beyond to spread the game’s gospel, stickball might emerge from the musty reliquary of pre-war curiosities into a casual, fun sport with potential to unite generations.

Albert Colon of Brooklyn recalled playing the game in the streets of Sunset Park as recently as 15 years ago. He brought his daughter, Alyssa, to the stickball challenge, where she played briefly in the outfield.

“I liked it,” Alyssa said later. “I like playing this game.”