Brooklyn BookBeat: Henrik Krogius, Joanne Witty Untangle the Tale of the ‘Jewel’ of the Brooklyn Waterfront 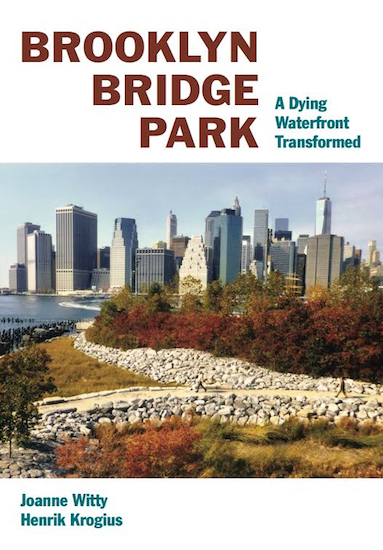 Stretching 1.3 miles along a waterfront that faces one of the world’s greatest harbors and storied skylines, Brooklyn Bridge Park is among the largest and most significant public projects to be built in New York in a generation. It has transformed a derelict industrial waterfront into a new public use that is both a reflection and the spark of Brooklyn’s resurgence in the 21st century. New York City is not alone. There are many shorelines in need of a makeover, and cities around the world are struggling to reimagine, enliven, modernize and monetize ailing or abandoned waterfronts.

In “Brooklyn Bridge Park: A Dying Waterfront Transformed” (Fordham University Press Hardcover), which will be published in September, Emmy-award winning news producer and former Brooklyn Heights Press editor Henrik Krogius and lawyer and park leader Joanne Witty share the inspiring story of how democracy and human nature can transform a maritime wasteland into an urban treasure. More than a simple history of the park, this book digs beneath the surface to explore why and how this environmental masterpiece came to be.

Witty, having been a leading actor in the park’s planning and development for almost 20 years, and Krogius, having covered the park from its inception as the editor of a leading local newspaper, the Heights Press, are in a unique position to describe the complicated and often contentious process that shaped and produced the park.

The park was developed “through persistent community pressure and the working out of many differences both with government bodies and between neighborhoods,” Krogius told the Brooklyn Eagle in an earlier interview.

“It is remarkable that we have a park at all, and it is a remarkable park,” Witty said. “It took pluck and luck on the part of many people to make it happen, and we tell some surprising stories in our book. ‘Brooklyn Bridge Park’ not only recounts the history but teases out its lessons and its significance. We hope it is a useful guide for other communities, and we believe it offers solutions that can be applied to important economic and planning issues around the world.” Situated below the quiet precincts of Brooklyn Heights, a strip of moribund piers that formerly served bustling port activity became the site of a prolonged battle when the Port Authority of New York and New Jersey eyed it as an ideal location for high-rise or commercial development. The idea to build Brooklyn Bridge Park initially came from local residents and neighborhood leaders looking for less intensive uses of the property. Together, elected officials joined with members of the communities to produce a practical plan, skillfully won a commitment of government funds in a time of fiscal austerity, then persevered through long periods of inaction, abrupt changes of government, two recessions, numerous controversies often accompanied by litigation and Superstorm Sandy.While controversies over development in the park continue to this day, “Brooklyn Bridge Park” is ultimately a success story of a grassroots movement and community planning that united around a common vision. Drawing on their own personal experiences, Witty and Krogius weave together contemporaneous reports of events and extensive recent interviews to provide an in-depth account of every twist and turn in the story.

More information about the book and the authors is available at http://brooklynbridgeparkbook.com and http://joannewitty.com. To read more about Krogius’ insights following two decades of change in Brooklyn and his books “New York, You’re a Wonderful Town!: Fifty-Plus Years of Chronicling Gotham” and “The Brooklyn Heights Promenade,” visit brooklyneagle.com.