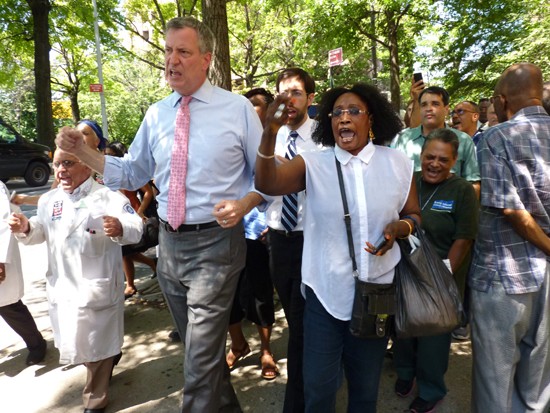 As public advocate, Bill de Blasio protested the closure of Long Island College Hospital. Now his role in selling the hospital may be under investigation by the U.S. attorney. Shown: De Blasio storms LICH during a protest in 2013, before he became mayor. Photo by Mary Frost
Share this:

U.S. Attorney Preet Bharara is reportedly  investigating Mayor Bill de Blasio’s involvement in the controversial sale of Long Island College Hospital (LICH), and residents of neighborhoods like Cobble Hill, Brooklyn Heights and Red Hook are hopeful that someone will finally be punished for the demise of the 150-year-old hospital.

The sale of LICH by the State University of New York (SUNY), which ignited protests and a years-long legal battle, was widely considered a debacle that delivered a lasting blow to health care in northwest Brooklyn.

“The community felt wronged by SUNY, by its mismanagement of LICH and the manner in which the state conducted the hospital’s closing and sale, as the development of the LICH site will forever alter our historic neighborhood,” Breedlove said. “Many residents remain highly skeptical of how such a damaging project came about.”

“The BHA is gratified that US Attorney Preet Bharara is investigating potential wrongdoing by Mayor de Blasio in the sale of the Long Island College Hospital. We would urge the U.S. Attorney’s office to also investigate what the BHA and six other community organizations alleged, in a letter sent to the U.S. Attorney in September 2014, to be serious misconduct and violation of law by SUNY during its acquisition, operation and closing of LICH. To our knowledge, those allegations were not investigated at that time.”

“I’m not surprised, but I’m very angry,” said Susan Raboy, past head of the advocacy group Patients for LICH.

“If this investigation can bring to light the corruption and prevent it from happening again, it’s a good thing. Now that Preet is involved, this is big time,” Raboy said.

De Blasio is not the only one to blame for the loss of the historic Cobble Hill hospital, she said. “Of course it’s Cuomo, SUNY and Fortis [Property Group]. But de Blasio stopped supporting us when he became mayor. He went from public advocate to public enemy.”

Dr. Toomas Sorra, president of Concerned Physicians of LICH, told the Eagle, “I am sure that all physicians affiliated with Long Island College Hospital through the years, especially those of us who were involved in trying to save LICH during the tumultuous last five or six years of its existence, are grateful to gear that perhaps some justice can be achieved.”

He added, “Concerned Physicians of the Medical Staff at LICH initially got involved in an attempt to separate LICH from its destructive Continuum Health Partners association. Our effort was obviously not successful since it only led to LICH being transferred to SUNY Downstate. The association with Downstate quickly led to LICH’s eventual demise, accelerated by some dishonest elected officials who promised us one thing regarding LICH and did another.”

Many residents who supported de Blasio in his campaign for mayor largely based on his promise to save LICH say they hope the investigation will explain de Blasio’s abrupt turn-around after being sworn in.

As public advocate, de Blasio rallied with community organizations and unions in the rain, heat and snow. At one protest, he (and several councilmembers) stormed through the doors of the hospital to present demands to its administrator, who locked himself in his office. At another, he was arrested in an act of public defiance.

“This disastrous decision will immediately impact over 82,000 Brooklyn residents who live within one mile of [LICH], 12,000 of whom are over the age of 60,” Public Advocate de Blasio wrote.

What is being investigated?

The investigation appears to center on whether de Blasio engaged in a pay-to-play scheme over the sale of LICH by the State University of New York (SUNY) to Fortis Property Group, according to a subpoena reported by the Daily News and the New York Post.

The feds want copies of “any and all communications” between SUNY employees, de Blasio and his top aides including First Deputy Mayor Anthony Shorris, Director of Governmental Affairs Emma Wolf and special counsel Henry Berger, the Post reported.

The probe may be related to developer Don Peebles’ allegation that de Blasio asked him for $20,000 to support the mayor’s universal pre-K program, UPKNYC, in March 2014, the Post reports. Peebles had a bid pending on the LICH site at this time.

UPKNYC later became the Campaign for One New York, which is now shut down.

A Peebles spokesperson told the Brooklyn Eagle on Wednesday, “It is our policy not to comment on pending legal matters.”

The probe may also look into the infamous “Reilly Letter” of June 2014. The controversial letter, sent to Brooklyn residents, touted the “stand-alone ER” that would replace the historic hospital.

Although it was signed by Carroll Gardens’ resident Gary Reilly, the letter was mailed from the headquarters of the Campaign for One New York.

As reported in the Eagle, the government watchdog group Common Cause raised alarms about “dark money” funding the mass mailing. The investigation may also be looking into whether the mayor was involved in a pushing through a deal with health care workers’ union 1199 SEIU in return for the union dropping a lawsuit against SUNY, a source told the Eagle.

“Once they got that, they pushed the other parties to settle,” a person present during the negotiations told the Eagle. Other parties to the lawsuit included SUNY, LICH Holding Company, seven community organizations, the New York State Nurses Association and others.

Or perhaps the U.S. attorney is interested in investigating how City Hall came to favor the Fortis-NYU proposal when they had previously opposed Fortis. Bigger than the mayor

The mayor, the governor and a number of New York state agencies all have dirty hands in the sale of LICH, advocates say.

“The closing of LICH, which was indefensible on public health grounds, was Cuomo’s decision,” says Jeff Strabone, former spokesperson for the Cobble Hill Association (CHA).

“The US Attorney ought to focus his attention on Cuomo and  on SUNY’s pilfering of the $140 million Othmer fund,” Strabone said.

The entire principal of the permanently restricted endowment was “borrowed” in 2011 to effect the no-cash transfer of LICH from Continuum Health Partners to SUNY. SUNY assumed the liability to repay the entire endowment, but now says it cannot.

According to court papers and documents obtained via FOIL, the transfer of LICH to SUNY would preserve a full-service hospital at LICH. Just 20 months later, however, SUNY announced it was closing LICH.

“I was happy to read that the U.S. attorney is looking into the sale of LICH,” Gartner said. “I know that he has been focusing on Mayor de Blasio’s various deals, but I hope that the investigation will prove to be just the first step in a wider probe into the web of NYS corruption that brought about the demise of LICH.”

They also want an investigation into SUNY’s failure to bill patients and insurance companies for treatment at LICH.

SUNY has repeatedly claimed it was forced to shut down LICH and sell the property to a developer because the hospital was losing millions of dollars a month.

An August 2014 investigation by the Eagle showed, however, that after taking over LICH in May 2011, SUNY Downstate’s failure to file standard paperwork with insurance companies cost LICH at least $106 million — and likely more. (See “Shocker: How SUNY lost more than $100M mismanaging LICH” at brooklyneagle.com.)

A Staten Island collection agency is now trying to collect on some of these bills, which date back years.

“These actions involved numerous state agencies, including SUNY, the Department of Health and the NYS Dormitory Authority, and the complicity of the NYS Attorney General’s Charities Bureau,” Gartner said.

Demolition at a standstill

Despite several meetings with City Hall, community groups in Cobble Hill and Brooklyn Heights say that they are still awaiting answers about Fortis Property Group’s plans for the site of the former hospital.

While interior demolition has taken place, the buildings remain standing. Police have been called to chase away vagrants.

The CHA and Councilmember Brad Lander have rejected Fortis’ ULURP plan because it is “too large, does not incorporate basic urban design principles, threatens our existing playgrounds and public green spaces, and does little to mitigate the tremendous negative effect this project would have on us, on our historic neighborhood, and on our community as a whole,” CHA said on July 13.

The Eagle has reached out to the Mayor’s Office for comment.