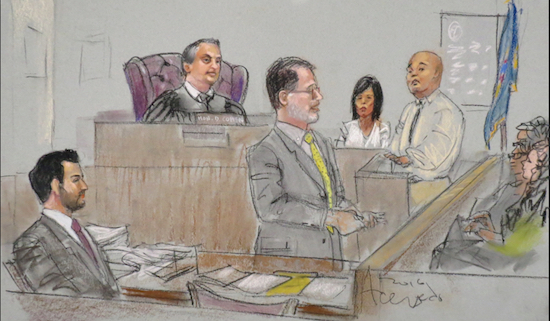 In this courtroom sketch, Hon. Devin Cohen listens as plaintiff’s attorney Joshua Pollack (standing), trial counsel to the law offices of Leslie Elliot Krause, conducts a direct examination in the pedestrian-motor vehicle accident trial Wu v. Khan. The plaintiff is a minor who was 7 years old at the time of the accident. His mother is on the witness stand, accompanied by Cantonese language court interpreter Richard Chan.  In July of 2011, Wu and his mother were on their way to his summer day camp in Brooklyn. At the crosswalk by 20th Avenue, Anwar Khan initiated a left turn from 67th Street. Khan testified that he momentarily stopped as did Wu’s mother, he claimed, believing that she was allowing him to proceed. Wu however stepped out ahead, and was felled by the car’s impact to his left side. Joseph DiSalvo (at left), of the law firm James G. Bilello & Assocs., represented Khan. Pollack claimed that Wu’s eventual diagnosis of Post-Concussion Syndrome constituted a serious injury. Wu’s mother testified that while Wu has been doing well, he still gets headaches three to four times per month.  DiSalvo pointed to Wu’s excellent standing as a student, and to testimony supporting his allegation that all claims of injury had resolved and did not meet the threshold of serious injury. The jury returned a verdict for the defendant, finding that while Khan was wholly responsible for the accident, Wu’s injuries were not serious. The summary jury trial was settled last week in Kings County Civil Term.