On any given weekend, hundreds of thousands of visitors are drawn to Brooklyn Bridge Park (BBP) for its lush lawns, breathtaking views, state-of-the-art athletic facilities and hundreds of free events.

In addition, no matter where you are in the park, you’ll be treated to breathtaking views of the Statue of Liberty, Manhattan skyline and East River bridges.

There are, however, in the 85-acre park, a few hidden gems that even the most venerable Brooklynite may not know about.

With that being said, the Brooklyn Eagle, along with our friends at BBP, selected 10 secrets in the park.

With summer in full swing, have fun exploring the places on our list and discovering your own.

While many New Yorkers know that ferries to Governors Island leave from the Battery Maritime Building in Lower Manhattan, a lesser-known voyage across New York Harbor begins from BBP’s Pier 6. The ferry runs on weekends from 11 a.m. until 5:30 p.m. and passengers can ride free until 11:30 a.m. Located on the Granite Terrace near Pier 3 is a book cart where the public can choose from a variety of books donated by the Brooklyn Public Library. The Granite Terrace is a peaceful area that shelters people from the hustle and bustle of the city. Feel free to read a book in this hidden oasis or take your literature to another spot in the park. Located at the end of Pier 5 behind the soccer fields is a fishing station. Fishermen are able to catch, cut and clean their fish in stainless steel sinks. On Sunday afternoons, BBP visitors can take part in the extreme sport of kayak polo. Kayak polo is free and takes place from 11 a.m. to 3 p.m. at Pier 2 until late August. On July 20 and July 27 there will be a new, free Summer Concert Series at Pier 1. Organized by Brooklyn Bodega, which is the same organization behind the Brooklyn Hip-Hop Festival, the group brings New York’s most exciting musicians to perform.

On July 20, Brooklyn’s own PitchBlak Brass Band and Grammy-winning trumpeter Maurice Brown will each perform, with a set by DJ OP! to follow.

Afro-Cuban music legend Larry Harlow will headline the July 27 concert, which opens with a set by DJ Ray Suave. On Thursdays and Sundays throughout the summer, the Big & Little Skills Academy (BALSA) offers free basketball clinics at Pier 2 for children ages 8 to 17. The clinics help kids hone their basketball skills, and the kids get to participate in three-on-three tournaments. Each three-on-three team has an NYPD officer as its captain or team member. Hidden in the middle of Pier 6 is the Flower Field, which boasts a wide array of different flowers in full bloom. Enjoy not only the fragrant flowers but also a world-class view of southern Manhattan from the Liberty Lawn. While there, enjoy the newest addition to this location, a 25-foot-tall, 360-degree rotating sculpture that reads “Understanding” from London-based artist Martin Creed.

Located next to St. Ann’s Warehouse is the Max Family Garden, a tranquil area filled with newly planted trees, stone benches and an escape from the city. Bring a book and get lost in this beautiful space. Take in the salt-water smells and cool winds of the East River at the Tidal Marsh at John Street. Located next to the Manhattan Bridge, this marsh boasts a pedestrian bridge, tree-lined walkways and a 13,000-square-foot lawn. In addition, the marsh was created with the footings of industrial buildings and original Belgian block and railroad tracks from the Jay Street Plaza. The borough’s trendiest young professionals are flocking to play the old-fashioned pastimes of bocce and shuffleboard. While these games can be found in the borough’s hippest bars, they also can be found on BBP’s Pier 6. 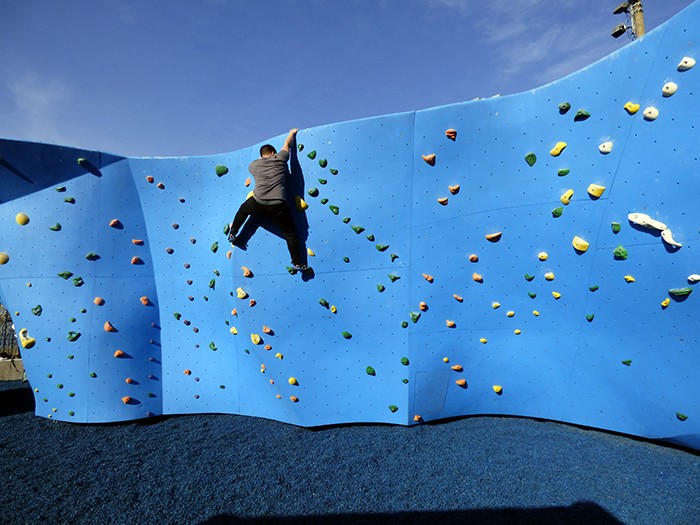 Tucked underneath the Manhattan Bridge near Main Street is a massive climbing wall. The area is called DUMBO Boulders and is claimed to be North America’s largest outdoor bouldering facility by its operator, The Cliffs. Last year, the Brooklyn Bridge Park Conservancy opened a glass-walled Environmental Education Center at 99 Plymouth St. underneath the Manhattan Bridge. The center is a former Department of Environmental Conservation water meter testing facility and offers classes for both children and adults. The Rush Arts installation will open next week in the center’s community room.