Pétanque, pastis, music and a guillotine Thousands make the pilgrimage to Smith Street in Boerum Hill every year for the largest — and definitely the most convivial — Bastille Day celebration in the U.S. Roughly 20,000 attendees are expected this year.

While the official holiday of French independence takes place on July 14, Brooklyn’s party takes off the proceeding Sunday. This year it will be held on July 10, from roughly noon to 6 p.m.

The street festival, which brings a piece of French culture to Brooklyn for a day, features swing bands, a visit from the French Consul General, Ricard aperitifs, a guillotine and the very French game called pétanque.

In an amazing transformation, Smith between Bergen and Pacific streets is covered in sand by an antique mixer truck, courtesy of John Quadrozzi Jr. of the Quadrozzi Concrete Company, and divided into courts for the tournament. (To see the transformation, swing by around 10:30 a.m.)

Pétanque is similar to bocce, but is played by throwing metal balls (boules) at a small wooden ball, or “pig” — usually while sipping a glass of pastis (Ricard’s anise-flavored French apéritif). This year, 72 teams from around the world will compete on the packed sand courts.

Restaurant Bar Tabac, a major sponsor of the day and ground center for the pétanque tournament, was the scene of the Bastille Day kick off last week.

Members of the media and their guests dined on Bar Tabac’s appetizers (délicieux!), drank Ricard libations, entered a pétanque quiz contest (Rodman Rodriguez, with superior knowledge of the game — at least on paper — was the winner of a set of boules) and enjoyed French music.

“I love New York, that’s my city,” pétanque champion and coach Xavier Thibaud told the Brooklyn Eagle. But on Bastille Day on Smith Street, “you feel like you are in the south of France for a few hours.” Thibaud says there are 150,000 French people in New York City.

Thibaud has played in the pétanque tournament ten times. (He and his teammates won eight of those times.) Teams play in Washington Square, Bryant Park and Prospect Park. “The most important thing is to have fun,” Thibaud said. He added, however, “In the beginning it’s just for fun, and then you start to have more emotion. It’s kind of an addiction in the end.”

Jonas Leon, the general manager of Bar Tabac. “It’s going to be my first Bastille Day as a manager here,” he told the Eagle. “So I’m going to enjoy.” Reporters also learned that the “quintessential component” of Bastille Day, Ricard’s pastis, is known as “sunshine in a glass.”

Patis is “almost designed to be drunk outdoor in the sunlight,” said Jamie Gordon, education manager for Pernod Ricard.

How do you drink it?

“Pour it into a glass, add water to taste, then add ice. That’s the classic serve,” Gordon said. 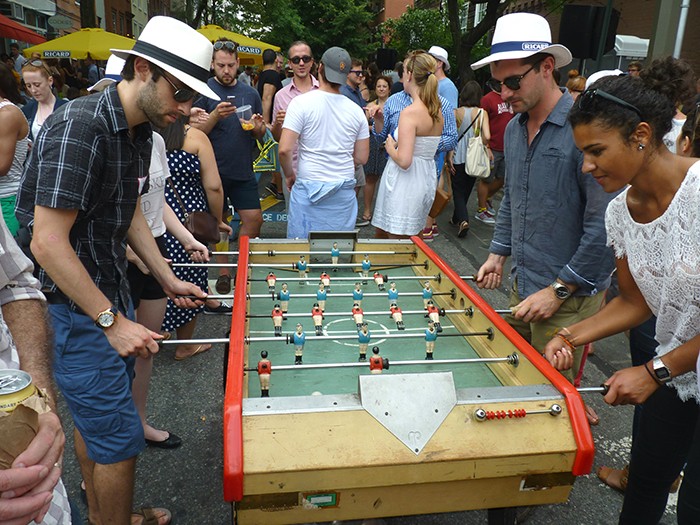 Bastille Day in Brooklyn: Pétanque, pastis and the World Cup Brooklyn courts go back in time for tea with Sojourner Truth