An unhappy crowd filled Dibner Auditorium at MetroTech on Tuesday for Brooklyn Bridge Park Corp.’s vote to approve the controversial towers at Pier 6. Photos by Mary Frost
Share this:

After years of community outcry, twists and turns by Empire State Development Corp. (ESD), accusations of pay-to-play and behind-the scenes politics, Brooklyn Bridge Park Corporation (BBPC) voted to approve on Tuesday a plan to develop two residential towers in the park at Pier 6.

Dissenters on the 17-member board of directors included public officials or their representatives (City Councilmember Stephen Levin, Zeeshan Ott, who represents state Sen. Daniel Squadron and Michael Stinson, representing state Assemblymember Jo Anne Simon), and Matthew Wing. These directors complained that the board had never been fully informed about the plan and that community input had been limited.

De Blasio’s appointee, Deputy Mayor Alicia Glen, who chairs BBPC, said that the project “has already been delayed over a year. Construction costs continue to rise; changes have been made to the design. If the board fails to move forward, we could lose the benefit to the park and lose a developer committed to union labor.”

Community comment was allowed at the meeting only after the board vote had already taken place. Many in the audience left in anger, after it was clear their statements would have no effect.

While the public has had the opportunity to comment in the past, the plan was tweaked last week – something even some board members said they were unaware of until the news was published in the Brooklyn Eagle and another paper.

During the board’s in-depth presentation justifying the need to develop the two parcels located near the Atlantic Avenue entrance to the park, hisses from the audience members, many carrying signs, illustrated the vast gulf between the coalition fighting the Pier 6 development and the BBPC board.

Brooklyn Bridge Park is obligated to be financially self-sufficient, but is bound by a longstanding community agreement to allow only the amount of development necessary.

Without revenue from Pier 6, the park cannot fulfill this mandate, the city says.

The Brooklyn Heights Association (BHA), Brooklyn Bridge Park Defense Fund and the People for Green Space Foundation (PFGSF) released a study by Rosen Associates in February, however, which concluded that the park would be running an $800 million surplus, even without the Pier 6 towers. The board on Tuesday saw charts and testimony meant to refute that assertion. Rosin’s figure for the project’s market value was set closer to Manhattan prices, such as 15 Union Square West, according to the presentation. The park’s valuation places it closer to 84 Front St. or 360 Furman St. The park also claims that Rosin overestimated the market value of the Empire Stores.

Louise Matthews, president of the board at One Brooklyn Bridge Park, a residential building in the park, made an on-going point of contention by many who oppose the “haste” of the Pier 6 project.

“What’s the desperate need to rush ahead now?” she said after the vote. “We will know within a year what Empire Stores and Pierhouse can actually contribute to the park. That should dictate how big Pier 6 needs to be.”

The city’s push on Pier 6 proceeded despite the May 18 decision by the state-controlled Empire State Development Corp. (ESD) to hold off on approving Mayor Bill de Blasio’s plan to allow affordable housing at the site.

At that time, a tangled web of connections between real estate developers, a powerful lobbyist and the mayor’s now-shuttered Campaign for One New York were at the forefront of the news.

A 2015 lawsuit by the People for Green Space Foundation was settled with a commitment by the park to seek permission from the ESD to modify the park’s General Park Plan (GPP) to allow for the affordable housing.

Glen said after the ESD’s denial that the city intended to move ahead with the project “with or without the state.”

An eleventh-hour letter released late Monday by ESD chair Howard Zemsky appeared to give its blessing to the project – or at least not stand in its way. The letter concluded that “the current MGPP [Modified General Park Plan] does authorize residential buildings and does not prohibit the inclusion of affordable residential units. Certainly, as a matter of policy, the state supports affordable housing, particularly in communities where it is in such demand.”

Public discussion on whether the ESD concession was legal was limited by Glen due to pending litigation. 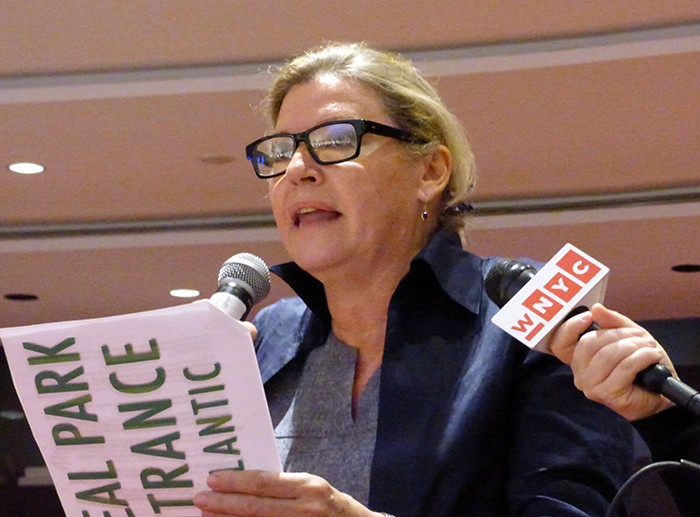 City Comptroller Scott Stringer released a letter to BBPC on Monday expressing his concern with the Pier 6 project and urging that the park board delay the vote and sit down with the community to negotiate.

One board member questioned why Stringer’s office hadn’t conducted an independent review, implying a lack of follow-through.

After the vote, Stringer swung back.

“Today’s decision by the Brooklyn Bridge Park Corporation to ignore the settlement agreement and push forward only increases the risk of additional litigation and is bound to escalate the animosity with the local community,” Stringer spokesperson Eric Sumberg said in a statement.

He added, “This kind of top-down planning disempowers local neighborhoods and strips residents of a real voice in shaping their communities.  The Comptroller’s office has made multiple requests to the BBPC to incorporate community-based planning and financial transparency into its processes. Unfortunately, the city has chosen to ignore these issues and turned its back on the many legitimate questions and concerns raised by the community.”

Squadron’s rep Ott said the proceedings had evoked “total community outrage.” The cost of the project is the “deep cynicism, apathy and disengagement of government that it breeds,” he added.

A source within the Brooklyn Heights Association told the Eagle that the group is preparing to initiate a lawsuit to test the lawfulness of the BBPC’s action. “The BHA believes today’s action was deeply flawed as a legal matter and that the court will annul it,” the source said.