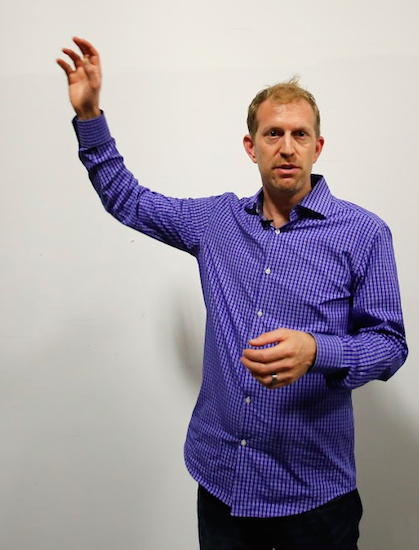 “It just felt right,” Eastern Effects, Inc. founder and owner Scott Levy describes the genesis of his studio and how he came to choose such an unlikely neighborhood for its location. Eagle photos by Andy Katz
Share this:

Alongside the head of one of North America’s most polluted waterways, a small film studio finds its existence threatened as two colossal bureaucracies battle head-to-head over the location of a key component to the long-awaited Superfund clean-up of the Gowanus Canal. Eastern Effects, Inc. is a small but highly sophisticated studio, rated level two by the Governor’s Office of Motion Picture and Film Development. It’s one of very few in South Brooklyn.

It also happens to be home to one of the most popular programs on television: FX’s “The Americans.”

Founded in 1999 by Scott Levy, Eastern Effects gradually expanded into several buildings in the Gowanus neighborhood. “It felt comfortable, this neighborhood,” Levy explained to press and community supporters while providing a tour of the 40,000-square-foot Nevins Street soundstage, where the hit FX show is currently on hiatus, but sets and props familiar to fans of the Jennings family fill every available space.

Levy recounted how, during filming of the show’s pilot episode, toilets all over the studio started overflowing. “We found out they drained directly into the canal. And the water level had risen past the drainpipes.” Under those circumstances the Superfund clean-up of their noisome neighbor ought to have been a godsend. The Environmental Protection Agency’s (EPA) initial survey of the region designated nearby Thomas Greene Park, described by the NYC Parks Department as “underutilized” and suffering from coal tar contamination in its own right, as an ideal location for the installation of the larger of two combined sewage overflow tanks that are an essential perquisite to dredging the canal. Because the park, and its public pool, would have to be closed anyway during the decontamination process, the agency believed it would be, “due to synergies associated with anticipated removal of coal tar from beneath the park site,” more efficient to bury the tank in a location already slated for excavation.

The problem, however, was that under the EPA’s proposal, the park and adjacent Double D pool would be closed for up to nine years, rather than the four estimated for the clean-up of just the coal tar. Community groups and the Parks Department stepped in. Public hearings and negotiations ensued, until city and federal governments reached an agreement that gave the city four years to find suitable alternative sites for the overflow tanks. Should the city fail to do so, the EPA retains the right to “pivot” back to its original choice of Thomas Greene Park and its community pool.

Enter Eastern Effects, Inc., sited opposite the park at 270 Nevins St.: “There are three buildings on this block that are completely vacant,” Scott Levy pointed out before starting a tour of the soundstage. “There is no commonsense argument why the DEP did not due their due diligence. No one from the city,” he added with obvious emotion, “no one told us we were going to be displaced.” While the agreed upon site for placement of the CSO (combined sewage overload) tank is one block north of the Eastern Effects building, the city wants to use its location as a “staging ground” for the excavation.

Eastern Effects and its resident productions account for 230 jobs, and 200 of those, according to Levy, are union. “The Governor’s Office calls us,” he said, “We’ve got this show, we’ve got that show, are you open? We need to be preserving the stages we have and we need to be expanding where we can … we have to turn away people on a daily basis already.”

Gowanus Community Advisory Group member at large Rafael Gomez de Luna took the tour with his daughter, Charlotte: “The studio brings quality of life and good jobs to the community,” he said. “They put a lot of work into it.”

City leaders have been criticized for making dilatory efforts to clean up the canal in years past. Mike Bloomberg’s administration opposed the Superfund designation in 2010, claiming in part that it would add needless bureaucracy to the effort. Given the degree to which an enterprise such as Eastern Effects steps up to create jobs and prompts the renewal of a fading industrial zone, only to be threatened with extinction by a program that should benefit them, city officials might not have been wrong.

“Somebody needs to tell them to stop,” Levy concluded. “To look around and help the situation. To do something different from what they’re doing.”

Meanwhile, the Gowanus Canal festers beneath an already sweltering summer sun and travelers continue to rely on their noses instead of GPS for directions in and out of the neighborhood.