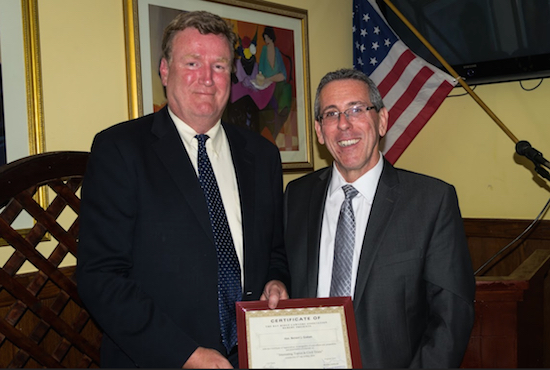 “Judge Graham is a very experienced lawyer who made a good name for himself as a practicing lawyer,” said Dominic Famulari. “He brought that practical experience as a lawyer to the bench and can now give us a judge’s perspective on the law.”

Graham’s topic was left ambiguous on purpose to allow him to find interesting cases that applied to a large swatch of the BRLA’s members. He presented on a variety of topics, including real estate and Internet case law.

“I thought they would be more interested in hearing about real estate oriented cases, real estate broker litigation, some foreclosure and some development law,” Graham said. “I went through all of my files over the last two years or so where I did bench trials and some significant motions involving co-ops and condominiums to cobble together some cases that I thought would be interesting to the lawyers.

“There is nothing worse than a CLE that has nothing for a number of people, and that can sometimes happen,” said Graham. “There are a lot of CLEs that cover very specific issues and if you don’t practice in that area, you sit there and there is nothing for you.”

Graham succeeding in keeping everyone interested and asking questions. Just to be sure he didn’t leave anyone out, he also discussed applicable laws for riding in the back of taxis.

“This has nothing to do with romance,” the judge joked. “I found it interesting because a lot of people don’t realize that if you get hurt in the back of a cab while not wearing a seatbelt, they’re going to hold it against you. These are things that attorneys have to advise their clients on.” BRLA Vice President Stephen Spinelli had to fill in for President Grace Borrino during the meeting as she was expected to give birth to her second child early Thursday morning.

“Grace has done a tremendous job for us as president and, considering the circumstances, we’ll excuse this absence,” Spinelli joked.

“She has had an exceptional year and we are all ecstatic for her,” past President Helen Galette added.

Borrino is the honoree of the BRLA’s upcoming annual dinner dance next month. It will be held at Battery Gardens in Manhattan on June 23. Following that dinner, the BRLA will take a break from its monthly meetings until September when Spinelli will officially take over as the association’s president.