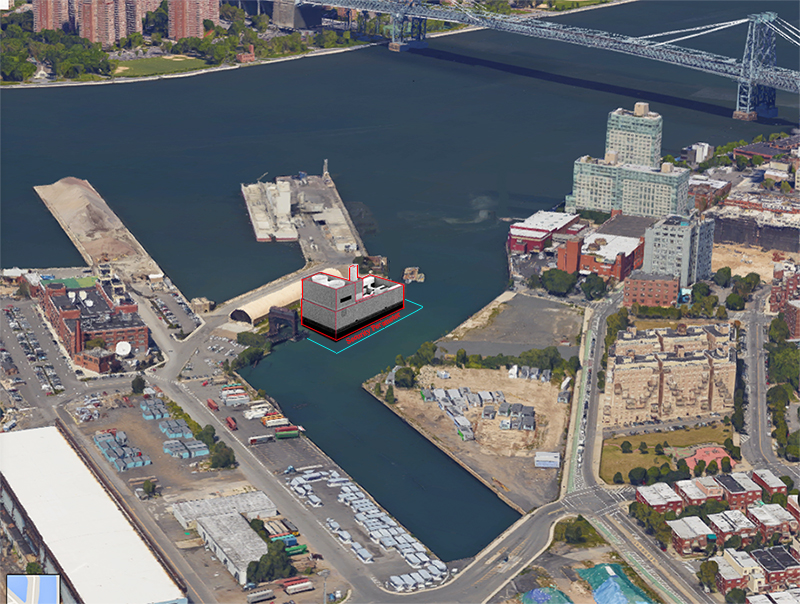 An energy company is pushing to install and operate a floating 79.9-megawatt power generator on a barge in Wallabout Channel at the Brooklyn Navy Yard, but local residents and officials are scrambling to short-circuit the project until some big questions are answered.

Rep. Nydia Velazquez (D – Parts of Brooklyn waterfront, Queens and Manhattan) has asked the Army Corps of Engineers for an extension of the public comment period, which has ended, and a public hearing on the application.

Other advocates, including the New York Harbor Foundation, want the plant shelved immediately.

NYC Energy LLC (aka SEF Industries) has filed a permit application with the Army Corps of Engineers for authorization to construct steel piles and a pipeline to permanently moor the power barge in the channel.

The power generator would be six-stories high, 100-feet-wide and 230-feet-long, and would require a security perimeter – obstructing the 230-foot-wide channel, critics say, and possibly causing pollution and safety risks. The plant would generate electricity from natural gas, though the barge would be powered by diesel, according to published reports.

A similar proposal was defeated in 2003 by a group called Stop the Barge.

The plant would be docked just a dog-paddle away from some major planned residential developments.

This includes, according to CityRealty’s August 2015 “Brooklyn New Development Report,” Isack Rosenberg’s 754 unit Rose Plaza on the River at 462-490 Kent Ave. Additionally, just north of the power barge would be Eliot Spitzer’s glittering, three-tower 856-unit project at 420 – 430 Kent St. According to the New York Times, the “stylish” rentals will boast not one, but two rooftop pools.

The Times reports, “Eran Chen, the project’s architect, described it as a ‘molded iceberg, sculpted to create the maximum number of views and outdoor spaces.’” There is a park and an esplanade.

The barge’s 79.9-megawatt output falls just below the 80-megawatt threshold that would trigger a state environmental approval process.

SEF Industries has applied to include the power barge in Gov. Andrew Cuomo’s Energy Highway initiative, on the grounds that the plant could be floated to another location in case of a power emergency. If approved, the company would receive an emergency preparedness services agreement from the state.

The developer has already leased a dock site at the Brooklyn Navy Yard.

“NYC Energy entered into a lease with the Navy Yard that started in October 2000 and expires by its terms in September 2021,” a Navy Yard spokesperson told the Brooklyn Eagle.

The spokesperson added, “We are currently reviewing our files to determine if there are any other Navy Yard agreements with NYC Energy and will comment further after completion of our review.”

Rep. Velazquez wrote on April 28 in a letter to Stephan A. Ryba, Army Corps Regulatory Branch chief, that her constituents have expressed “significant community reservations about this project.”

“Beyond navigability, this project raises environmental, public health and safety concerns,” she wrote.

Velazquez also noted that the Brooklyn Navy Yard is currently undergoing far-reaching master planning. “The vacant land on either side of this channel must be considered holistically for future opportunities and should not be encumbered by one single project,” she said. “How this proposed project interacts with long-term plans for the Yard is a question that requires further discussion and exploration,” she added.

Home to millions of oysters

“I can’t imagine a more backwards proposal for a waterbody that is finally, for the first time in generations, because of the hard work of many organizations and hundreds of people, led by NYC public school students, seeing signs of life again,” New York Harbor Foundation Executive Director Murray Fisher, co-founder of the Billion Oyster Project, told the Eagle.

“Wallabout Channel is not only home to a youth rowing program that provides invaluable and exceedingly rare safe boating access to the Harbor for youth, it is also Billion Oyster Project’s primary nursery with nearly 3 million live oysters,” he said. These oysters will eventually end up on reefs throughout the city.