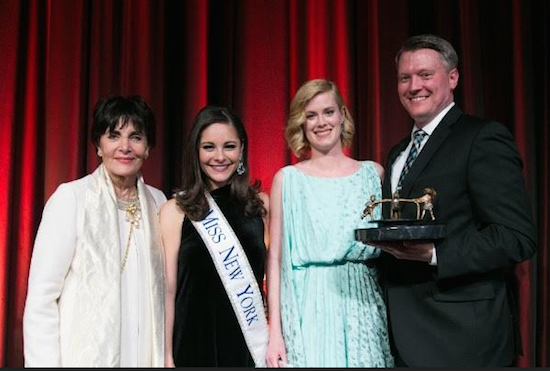 Actress Abigail Hawk, who co-stars in the CBS hit “Blue Bloods,” was a guest of honor at the Spring Gala of HeartShare Human Services of New York, where more than $600,000 was raised for programs for the developmentally disabled.

The gala took place at the New York Marriott Marquis on March 23. HeartShare is based at 12 MetroTech Center.

“I want to take this moment to reflect on the generosity of time, talent and selflessness to be a human being giving to those with special needs and elevating people in crisis. To me, this is New York. This is the world that HeartShare has helped create,” Hawk said.

HeartShare board member and Fox 5 news anchor Rosanna Scotto, along with traffic reporter Ines Rosales and meteorologist Mike Woods, presented HeartShare President and CEO Bill Guarinello with an award recognizing his 45 years of service to the nonprofit agency.

“This is really special for Rosanna Scotto and her team to be here to recognize me tonight. No matter how much of a celebrity she’s become, she hasn’t forgotten her roots,” Guarinello said.

Guarinello credited HeartShare’s 2,400 employees with the agency’s success. “Our goal to offer quality services to New York children, adults and families would not be possible without our dedicated staff,” he said. HeartShare starts toy drive for kids in its care