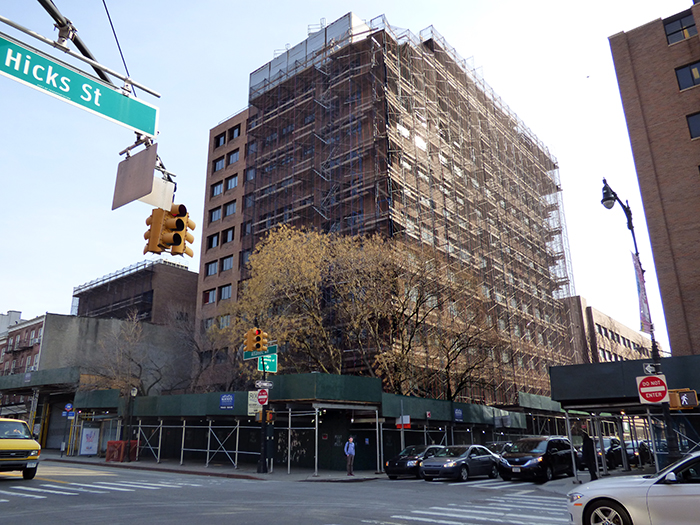 Community groups in Cobble Hill and Brooklyn Heights say that they are still awaiting answers about Fortis Property Group’s plans for a new medical facility on the site of the former Long Island College Hospital (LICH), shown above. Photo by Mary Frost
Share this:

Despite several meetings with NYU Langone Medical Center and City Hall, community groups in Cobble Hill and Brooklyn Heights say that they are still awaiting answers about Fortis Property Group’s plans for a new medical facility on the site of the former Long Island College Hospital (LICH).

After receiving what they call an inadequate response to questions raised at the meetings, the Cobble Hill Association (CHA) and Brooklyn Heights Association (BHA) fired off a letter to NYU Langone on Tuesday.

Their main concerns are traffic, transportation and parking issues at NYU Langone’s new medical facility, to be located at 339 Hicks St. (at Atlantic Avenue), along with a lack of information about the demolition and construction timeline and building plans for the new medical facility. They also pushed to see the full report of a traffic study recently completed by “Gridlock” Sam Schwartz.

“We were particularly disturbed by the inability, or unwillingness, of NYU Langone and Fortis to provide the community and its elected officials” with this information, they said in the letter.

The groups say that their efforts to obtain copies of NYU Langone’s site plans from DOB have been unsuccessful. CHA and BHA are especially concerned with the fate of two public recreational spaces, and the design of the proposed main patient entrance on Atlantic Avenue and the emergency vehicle access and waiting areas on Hicks Street.

Last fall, Fortis obtained approval from the NYC Parks Department to close the two public spaces on the former LICH campus — the Henry I playground on Henry Street and the Pacific Street Pedestrian corridor — while demolition is underway. According to CHA, demolition was projected to be completed and the public spaces reopened by February 1, 2016.

“Despite it now approaching April 2016, demolition on the site has been stopped for several weeks and these public spaces remain closed. It was troubling to us at the meeting that neither Fortis nor NYU Langone was able to give us any information relating to the demolition or construction schedule,” the groups wrote.

The demolition work ground to a halt last month when Stop Work Order (SWO) was issued by the NYC Department of Buildings (DOB). A heavy smoke condition brought the Fire Department to the site on Feb. 16. DOB noted in their records that the contractor failed to adequately monitor the demolition, failed to have an elevator in readiness and lacked certificates for the elevator and an alarm system.

Meanwhile, the groups say, the contractor has left staging materials in the playground and on Pacific Street, preventing their use during the work stoppage. (DOB required that the playground remain shut during demolition.)

Persons familiar with the work say that scaffolding still sits in the playground, awaiting the lifting of the SWO. Much of the demolition of the interior of the Fuller and Othmer Pavilions is completed, and contractors expect the SWO to be lifted “soon.”

CHA’s attorney has sent a letter to the Parks Department demanding it step in to reopen the playground, one of two which were permanently dedicated to the public years ago in exchange for the right to build a parking garage on deeded parkland.

Fortis spokesperson James Yolles told the Brooklyn Eagle on Wednesday that Fortis has been working with the contractor and DOB to remedy the violations. “We expect to begin exterior demolition within the next few weeks,” he said.

The planned 4-story, 125,000 square foot outpatient facility, owned and operated by NYU Langone, is scheduled to be completed by early 2018, according to NYU.

CHA is worried, however, that the neighborhood will be flooded with cars seeking parking in the blocks near the new medical facility.

“It was disappointing to learn that Fortis will be reserving only 137 parking spaces to accommodate a medical staff of 400 people plus hundreds of daily visitors to NYU Langone’s emergency room and ambulatory care center,” their letter states. This number of spaces reflects “only the minimum required by zoning rather than an amount based upon an analysis of trip generation to the facility.”

In response to this complaint, Yolles said, “We will provide parking for the NYU Langone facility as required by NYC zoning regulations, which are designed to ensure that specific uses, such as a medical facility, are appropriately accommodated.”

The latest meeting last week was specifically intended as an opportunity to solicit feedback on NYU Langone’s planned medical services, not construction issues.

Franklin Stone, former CHA president, acknowledges this but told the Eagle in an email, “NYU Langone set up this set of meetings for this purpose, but provided no other forum for discussions about the logistical issues (parking, traffic, ambulances, etc.) that bear directly upon their ability to provide medical services in this neighborhood.  These issues were raised by the community and elected officials in the first meeting in August. And again in December. And in our January letter. And again in the March meeting and our March letter. Each time, NYU Langone is either surprised anew by the concerns or tells us ‘not to worry.’ Well, we are worried . . . .”

Requests for comment by NYU were not received by deadline. Please check back for more on this story.