$800 million surplus even without Pier 6? 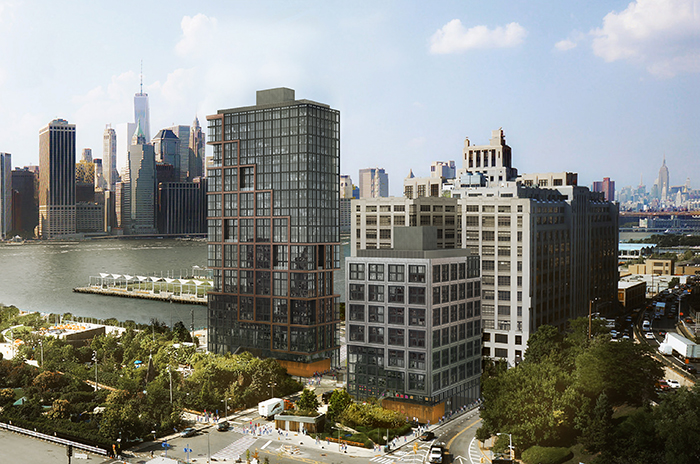 A coalition of Brooklyn community organizations has released two commissioned reports from independent firms that they say point to a massive surplus from existing development projects in Brooklyn Bridge Park, eliminating the need for a controversial two-tower project at Pier 6.

The coalition says that the Brooklyn Bridge Park Corporation (BBPC) appears to be “making up numbers” to justify putting additional housing in the park.

“We hope to get the decision-makers in on these issues,” said BHA Vice President Carolyn Ziegler.

“We’d like to go back to the model where we were partners making decisions on Pier 6,” she added. “There’s no rush to put up 16 and 30-story towers. We can wait for real data.”

All the park properties will be assessed by January of next year, providing the community with concrete numbers on how much income they will bring to the park, according to Henry “Ren” Richmond, financial analyst and board member of PFGSF.

Brooklyn Bridge Park is obligated to be financially self-sufficient, but is bound by a longstanding community agreement to allow only the amount of development necessary to support the park. The commitment to minimize park development was thrown out the window after Mayor Bill de Blasio came into office, the groups said at Monday’s press conference.

The city-controlled BBPC is now seeking to develop Pier 6 “without regard to project finances,” according to the General Project Plan (GPP) modification requested by the park corporation in June.

Many advocates see this as an attempt to do an end-run around the original agreement with community groups, upon which the plan was approved. They say the city has put forth a huge lobbying effort to influence the Empire State Development Corp. (ESD), which must approve the modification.

De Blasio has made a building affordable housing a priority; 30 percent of the Pier 6 development would be affordable if the GPP modification is approved.

Last week, however, the Empire State Development Corp. (ESD) put the brakes on their request, as first reported in the Wall Street Journal. An ESD spokesperson told the Brooklyn Eagle on Monday, “We held many hours of public hearings and there was overwhelming opposition to the project from the community and elected officials. Since then, we have been giving‎ the city additional time to work with the community to address the significant concerns they have raised about the project’s potential impact.”

“We want to go back to the community work that came before and the respect we have for that. That all went out the window starting with Pierhouse.” (Pierhouse is another controversial project located at the Pier 1 end of the park.)

In the first report released on Monday, appraiser Rosin & Associates, which has been used as a tax expert by the City of New York, examined BBPC’s revenue projections.

According to Rosin’s study, the park financial model dramatically underestimates its revenue.

“The comparison shows that it is highly likely that BBPC’s estimates for park revenue are significantly understated,” Rosin’s report states.

Rosin calculated that the long-term park tax revenue would be 66 percent higher than estimated by the BBPC, resulting in an additional $9 million per year.

Richmond said that the difference between what BBPC estimates as its annual revenue from developments and what Rosin estimates is “shocking.”

Based on Rosin’s assessment, Richmond calculated that existing Brooklyn Bridge Park development projects will generate $800 million in excess funds over the next 50 years, even if the Pier 6 project is never built.

“The park estimates $13.5 million in recurring revenue from PILOTS [Payments in Lieu of Taxes], but Rosin estimates $22.5 million,” Richmond said.

In a second report, marine engineering firm Goldenrod Blue Associates examined the park’s preferred pier maintenance approach. In this plan, the park would coat of all of the piers’ piles in protective epoxy starting immediately, rather than refurbishing them with concrete over time as they wear out.

The park’s own engineering firm, CH2M Hill, says that spending roughly $250 million on the pile refurbishing — $90 million of this within the next two years — will save $87 million on more costly repairs in the long run.

Goldenrod Blue, however, called this approach “deeply flawed,” saying it would result in greater costs and shorter piling life than a pay-as-needed repair schedule.

“By rushing to implement the proposed ‘preventative maintenance’ strategy, BBP will require future significant maintenance to be performed . . . considerably sooner than would be required if a phased approach is applied,” the report states.

This front-loading would “shortchange future generations by 20 to 25 years in the timing of the need for future maintenance,” the report added.

Brooklyn Bridge Park received the reports after the press conference on Monday. While staff had little time to review their contents, spokesperson Belinda Cape commented briefly on the coalition’s assertions by press deadline on Monday.

“While some may never accept it, we’ve exhaustively demonstrated that the Pier 6 project is essential to the park’s long-term financial stability,” she told the Brooklyn Eagle.

She also questioned the experience of Goldenrod Blue Associates.

“We have not had an opportunity to review these reports in depth, but basing a serious analysis on the expertise of someone who, by his own admission, has no relevant experience in marine infrastructure projects is highly questionable. To put the financial future of a park enjoyed by millions at risk — as these groups advocate — is simply unacceptable.”

Capt. Edward L. Bartlett, Jr., US Merchant Marine, who authored the report, states that he has an undergraduate degree in marine engineering and naval architecture. He says in his report that his “core expertise is in all aspects of ship and related marine equipment design, construction, operation and maintenance.” He adds that he “is not an expert in wood piling design/maintenance, but has applied his more than 30 years of engineering and business leadership experience to this Pro Bono assignment.”

The community coalition points out that BBPC’s own marine expert CH2M Hill has a financial interest in accelerating the pier repairs. In April 2014, BBPC upped CH2M Hill’s contract for repairs to Pier 3 to $1,876,965.

State Sen. Daniel Squadron told the Eagle on Monday, “On issue after issue, there is community frustration with the Park Corporation’s transparency and collaboration. The community being forced to do its own study is another sign of this. The Corporation should engage this report openly and directly.”

Deputy Mayor Alicia Glen, de Blasio’s point person as head of the BBPC’s board, defended the Pier 6 project in a statement.

“It’s a rare day when a single project can do this much good for a neighborhood. Vital funding for the park, new open space, affordable housing, pre-K for our kids, union jobs—we cannot let this opportunity quietly slip away,” she said.

Community groups, officials and local residents had long argued that a supplemental Environmental Impact Statement (SEIS) should be required in light of the exploding development, overcrowded schools and changed conditions in Brooklyn since the original EIS was issued 10 years ago.

After voicing concerns about the project’s impact on the area and questioning some of the methodology behind a park-commissioned Technical Memo, ESD directors in June left the door open to consideration of an SEIS.

Advocates see in the roadblock the potential for restoring three acres of parkland and designing a welcoming entrace to the park’s main southern entrance at Atlantic Avenue.

“We now have the once in a lifetime opportunity to restore lands for a public park, and halt the deeply flawed policy of housing inside a public park, in a flood zone, in a year with the highest-ever recorded temperatures. Have we learned nothing over the past decade?” said Doreen Gallo, executive director of the DUMBO Neighborhood Alliance and a member of the BBP Community Advisory Council. “Now we have definite proof that Brooklyn Bridge Park will have a surplus of close to a billion dollars which means not only is the Pier 6 development not needed, neither, it seems, was John Street.”

Gallo feels its time to return to the park’s original vision. “We have destroyed the open space in the former Empire Fulton Ferry State Park, cluttered our unfettered shore line with favored developers who grotesquely overbuilt commercial buildings and, in the case of the Carousel, get to keep all the funds, too. It’s high time these precious few remaining lands are dedicated to park land and protected forever.”

The New York City Comptroller’s Office said recently that BBPC may be able to issue tax-exempt bonds through a conduit agency to finance capital improvements.

Advocates say the use of bonds could conceivably eliminate the need to build the two residential towers.

BBPC says, however, that upon receipt of the Comptroller Office’s letter, the park reached out to the city’s Office of Management and Budget regarding the feasibility of issuing bonds to cover “the significant budget shortfalls that ensue without the Pier 6 development.”

BBPC’s Cape told the Eagle, “OMB was not supportive of this idea for three reasons. First, they noted that issuing bonds to cover park maintenance and operation expenses was not within the bounds of the original financial plan for the park.  Second, without the revenue from the Pier 6 development, there would be insufficient funds to pay off the resulting debt service. Finally, they note that OMB has a long-standing policy of city related entities incurring debt on their own due to the potential negative impacts on the city’s own borrowing program.”

Updated March 1 to add a statement from BBPC regarding the feasibility of issuing bonds to finance capital improvements.

Updated March 1 to add that Richmond calculated that existing Brooklyn Bridge Park development projects will generate $800 million in excess funds over the next 50 years,  a calculation that was based on Rosin’s assessment.

Updated March 1 to add a statement from Doreen Gallo, executive director of the DUMBO Neighborhood Alliance and a member of the BBP Community Advisory Council.