Where to celebrate Chinese New Year in Sunset Park Chinese New Year, that is.

The Year of the Monkey arrived on Monday, Feb. 8 — a red-letter day for Sunset Park’s Chinatown and its vibrant commercial heart, Eighth Avenue.

It’s not too late to share in the celebration.

This coming Sunday, Feb. 14, the borough’s own Lunar New Year Parade will take place. Its starting place is Eighth Avenue and 50th Street; the start time is 11 a.m. The parade gives residents of other neighborhoods a terrific reason to visit the Chinese immigrant stronghold. We just spent a couple days there and we can assure you — it lives up to the praises it receives as a foodies’ paradise.

* Dragon fruit is piled up high like crazy-looking fuchsia softballs at sidewalk produce purveyors such as Ting Sang Market at 5724 Eighth Ave., along with gigantic grapefruit and beautiful vegetables. * Fishmonger S & P Seafood Inc. at 5802 Eighth Ave. has crate after crate of fish on ice, from coiled-up eel to thick, perfect slices of salmon. * You could be diverted by all the different dessert shops and wind up with no time to eat anything else. That’s not a bad thing. Just consider yourself warned.

There are addictive $1 egg custard tarts at Dragon Bay Bakery at 5711 Eighth Ave. Xin Fa Bakery at 5617 Eighth Ave. has photogenic bird nest buns — the English-language name for rolls with dried squid baked into them — and a zillion sweet treats. We should take a brief breather from noshing to explain how Sunset Park’s Eighth Avenue became a magnet for Chinese-born Brooklynites.

In the early decades of the 20th Century, the avenue was so heavily populated with Norwegian businesses that it was nicknamed Lapskaus Boulevard. Lapskaus is a Norwegian stew.

In the 1980s, Norwegian departures from the neighborhood left nearly 90 percent of Eighth Avenue’s storefronts vacant. That’s when Chinese-born entrepreneurs stepped into the breach and started buying buildings and opening shops.

Many of the early arrivals were from Hong Kong.

The N train played a vital role for Chinese immigrants who decided to live in Sunset Park but worked in Lower Manhattan’s Chinatown.

According to the Brooklyn Chinese-American Association, commuters who couldn’t read English-language signs recognized the Eighth Avenue and 62nd Street N stop as theirs because it’s the “blue sky station,” the first Brooklyn stop that’s located above-ground.

Since the 1990s, the influx of new arrivals from Southeast China’s Fujian province to Sunset Park has been heavy. The neighborhood is now called Little Fuzhou or Fuzhou Town in reference to Fujian’s capital city. Chinatown’s Eighth Avenue from 40th to 65th streets has lots to look at that isn’t food-related. 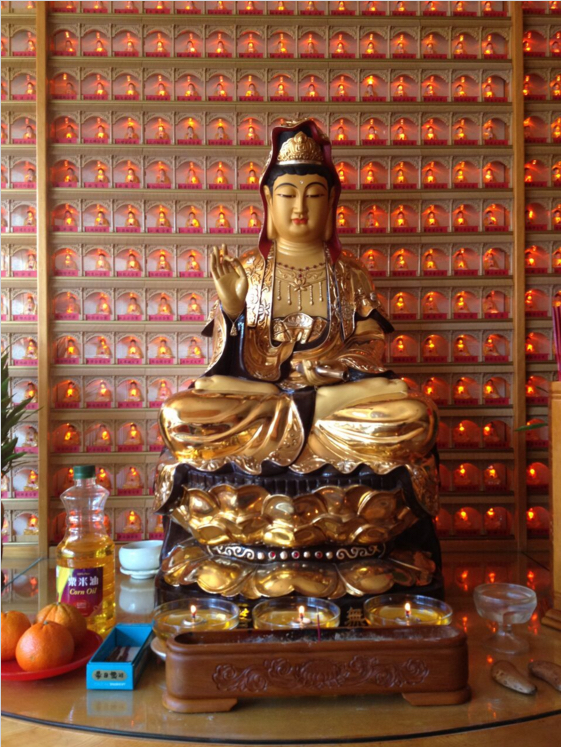 * Eye-catching fuchsia-colored fish are on display at aquarium outfitter Royal Aqua World at 815 65th St., just off the corner of Eighth Avenue. The shop also sells bait and tackle. * Handsome rowhouses can be found on various side streets — for instance on 55th Street between Eighth and Ninth avenues. Eighth Avenue itself has clusters of fine old rowhouses, such as 4213 to 4223 Eighth Ave. on the corner of 43rd Street.

But back to food and beverages. You’ll want both after watching Sunday’s parade. * Fei Long Market at 6301 Eighth Ave. has a staggering variety of Asian packaged goods, frozen foods and produce, from dried rose buds to black soy drink to a hairy-skinned tuber called nagaimo that’s a foot and a half long. And hey there, hipsters: Your favorite hot sauce, sriracha, was marked down to $2.29 per 28-ounce bottle when we shopped there the other day.

* For a classy caffeine fix, there’s Ten Ren. The Taiwan-based company, whose name means “heavenly love” in Chinese, sells loose tea leaves that are stored in golden-hued canisters. Top-grade black tea is priced at $32 per pound. It is the best-tasting tea we’ve ever tried. Period. * Just a few New York City restaurants offer cuisine from Yunnan, a Chinese province bordering Vietnam, Laos and Myanmar. Yun Nan Flavour Garden at 5121 Eighth Ave. is one of them. Its chewy noodles, made at the restaurant, have won legions of fans, including trailblazing food writer Robert Sietsema.

* Nyonya, a Malaysian restaurant at 5323 Eighth Ave., is a foodie find.

Writers rave about its Malaysian-style puffed bread, roti canai, and rightfully so. We also really like the chicken with shredded mango. Other, more adventurous dishes look tasty, too.

Because there’s a limit to how much food even the most stalwart gourmet can consume in a day, make a return visit to the neighborhood if necessary to try one.

* We’ve run out of space to tell you about the dim sum banquet halls, dumpling restaurants and bubble tea shops. If we didn’t mention your favorite Chinatown eatery, please post a description of it in our Comments section below this story.