This is the Parkway Garage on Fourth Avenue in Sunset Park. Eagle photos by Lore Croghan
Share this:

The Parkway Garage, a handsome pinkish-hued Sunset Park warehouse and office building, landed a buyer in no time flat.

There were “quite a few qualified buyers bidding for the asset” — and an accepted offer from a developer just two weeks after it went onto the market, Neil Dolgin, co-president of Kalmon Dolgin Affiliates, told the Brooklyn Eagle.

His firm is the seller’s rep for the 24,000-square-foot building at 5018-5024 Fourth Ave., which is on the corner of 51st Street. It’s one of many picturesque properties to be found on Fourth Avenue in Sunset Park.

The buyer is paying a little more than the asking price, which was $7.5 million, Dolgin said.

“Because the building is built very well and has a lot of interesting features, the developer is looking to rehab the structure and create residential or office space,” he said.

The four-story Parkway Garage is situated at the top of a sloping street lined with low-rise rowhouses, so it has views of the Statue of Liberty and Lower Manhattan.

“This will be a project that will be one of many over the years” in Sunset Park, Dolgin predicted.

“This location on Fourth Avenue is only going to increase in value when new projects are going to be created,” he said. “Someone needs to be the pioneer and the rest will fall into place.”

The sale deed hasn’t yet appeared in city Finance Department records, so we don’t know the purchaser’s name. 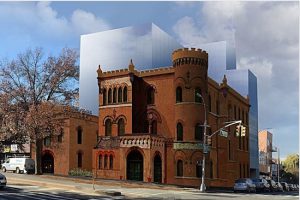