DOE's rezoning plan would shrink the P.S. 8 zone and enlarge the P.S. 307 zone. Courtesy of DOE
Share this:

The District 13 Community Education Council (CEC) will vote on the proposed rezoning of P.S. 8 in Brooklyn Heights and P.S. 307 in Vinegar Hill at a special calendar meeting on Jan. 5 at 6:30 p.m. The meeting, which is expected to be crowded, will take place at P.S. 56, 170 Gates Ave.

Parents at P.S. 8 have been pushing the city’s Department of Education (DOE) to come up with a solution for ever-increasing overcrowding at the school for years. Pre-K has been eliminated and 50 kindergarten students were waitlisted this year, agonizing parents who had moved to Brooklyn Heights specifically so their children could attend P.S. 8.

After several community meetings, the P.S. 8 Parent-Teacher Association has supported the rezoning, calling it the only plan on the table to address the problem in time for the 2016-17 school year.

In a release, the PTA’s Community Affairs Committee said, “If the CEC does not approve a rezoning plan to take effect for the 2016-17 school year, our community would need to be prepared for a very large wait list for our 2016-17 kindergarten class.”

The DUMBO Neighborhood Alliance (DNA), however, has called for a delay in the vote.

Doreen Gallo, DNA’s director, said the alliance is against the proposal “moving forward to the CEC without the DOE answering very basic questions and needs of both communities.”

In a letter to Meg Barboza, director of Strategy and Engagement on the district planning level for DOE, Gallo wrote, “Our community is committed to working with P.S. 307 and the Farragut community to prepare a strong plan with real community input for the rezoning to be successful in 2017. This proposal moving forward to the CEC with a flawed process sets a poor precedent for other school rezonings. Hopefully the CEC will vote NO with a recommendation to come back after the DOE has done its due diligence, and incorporate community input to provide solutions to prevailing issues.”

In late November, DOE spokesperson Devora Kaye told the Brooklyn Eagle, “‎The DOE is committed to working with the CEC and District 13 community to ensure that the rezoning process is inclusive of all partners.”

She added, “We’re encouraged by the progress and collaboration taking place, and we’ll continue to engage both school communities, families, community members and elected officials with meaningful conversations during the duration of this process.”

P.S. 307, located in Vinegar Hill adjacent to the Farragut Houses, a public housing project, is undersubscribed, according to DOE.

The proposal would greatly reduce the size of P.S. 8’s zone by placing all of DUMBO and Vinegar Hill, and a bit of Downtown Brooklyn, in P.S. 307’s zone.

With rezoning, parents at P.S. 307 have expressed concern about losing their magnet program in math and science, special classes like Mandarin and enriching activities like chess and violin lessons. They also fret about changes rezoning would bring to the school’s culture, with a current student body that is 90 percent black and Latino, and mostly low income, being transformed into one that is up to 45 percent white and relatively affluent.

According to DOE, the rezoning will not have any effect on their magnet school status. It may, however, affect Title I funding, which a school receives if 60 percent of its students are eligible for free lunch.

P.S. 8 is currently operating at 143 percent capacity, according to DOE. As new developments in Brooklyn Heights, DUMBO and Downtown Brooklyn reach completion, the school will only become more overcrowded, parents and elected officials warn.

If the rezoning measure is approved, P.S. 8’s total enrollment is expected to remain roughly the same as it is now. P.S. 8 currently serves 751 students.

Middle School to Be Relocated

As another aspect of the rezoning, DOE is also looking to relocate Satellite West Middle School, currently located at P.S. 307, to the second floor of the new Dock Street building (19 Dock St., aka 60 Water St.).

The city also want to put a new pre-K on the first floor at Dock Street, which would serve 72 children. The preschoolers won’t mix with the middle-schoolers, DOE says. 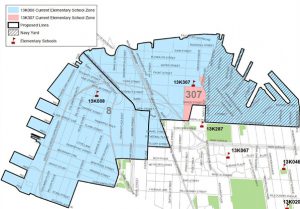