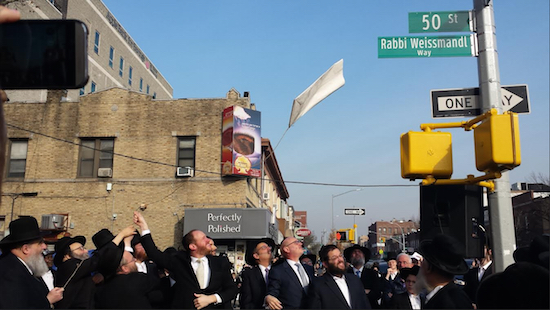 A Borough Park street was officially renamed by New York City on Sunday in memory of a rabbi who helped save thousands of Polish refugees and Slovakian Jews from concentration camps during the dark years of the Holocaust.

Councilmember David G. Greenfield, who sponsored the necessary legislation in the City Council, hosted the ceremony to rename a 10-block stretch of 50th Street, between 10th and 20th avenues, in honor of the late Rabbi Michael Dov Weissmandl.

The ceremony took place on the corner of 50th Street and 16th Avenue.

Rabbi Weissmandl (1903-1957) was a resistance fighter and a leader of an underground organization called the Working Group that helped thousands of Polish refugees and Slovakian Jews during World War II, who would have faced almost certain death in mass extermination camps like Auschwitz. “Today, anyone can be a hero. We throw around the term very loosely. Those aren’t the yardsticks we use when talking about Holocaust heroes,” Greenfield said.

Naming a stretch of roadway after him “is the least we can do in tribute to this great rabbi to ensure his legacy and heroism lives on in our community for generations to come,” Greenfield added. Elly Kleinman, founder and president of the Kleinman Holocaust Education Center, said Rabbi Weissmandl was an important historical figure. “Rabbi Weissmandl was one of the first to sound the alarm about what was happening in Europe, and he was a hero of Hatzoloh,” Kleinman said.

“The time has come to recognize and remember Rabbi Weissmandl, who was a real hero of our generation, whose only goal during the Holocaust was to save as many Jewish lives as possible,” said Ruth Lichtenstein, publisher of Hamodia, a Hebrew language newspaper, and director of Project Witness, a program that collects first-hand accounts of the Holocaust from survivors.The City Council has the authority to rename streets in commemoration of New Yorkers who have made a lasting impact on large segments of the city’s population or whose importance to the city is a result of exemplary acts. “No person is more befitting of this honor than Rabbi Weissmandl,” Greenfield said.