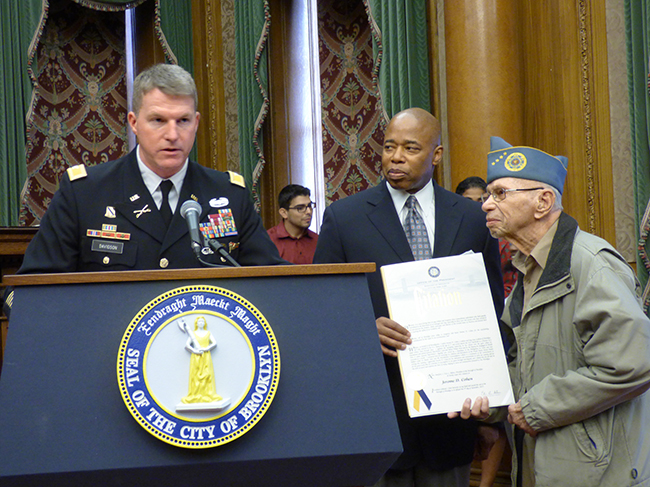 Specialist Bryan Dilberian works with the FDNY 9 to 5 and just played in a hockey game against West Point. (West Point lost, he says.)

A normal life for an active young man – but extraordinary for a triple amputee who lost an arm and both legs below the knees after he stepped on an improvised explosive device (IED) in Afghanistan.

Dilberian, a native of Brooklyn who recently moved to a specially built (and donated) home on Staten Island, received a heartfelt round of applause at Brooklyn Borough Hall on Monday when he when he spoke about his newest dream.

“I want to graduate from West Point,” he said.

The moment was part of Borough Hall’s moving ceremony to honor Brooklyn’s veterans.

Before a packed courthouse, a color guard showed the colors and the national anthem was sung by Christina Burgos as audience members, most connected to the armed forces, held their hands over their hearts.

After United States Army Garrison Chaplain Maj. Tracy Hudgins offered the invocation, the borough president presented citations to Brooklyn vets from each of the branches of the United States armed forces. Adams outlined Brooklyn’s commitment to programs addressing economic and mental health challenges facing vets, saying, “We should not have veterans living in the streets.”

“Brooklyn honors its vets, Brooklyn respects its vets and Brooklyn never forgets its vets,” he said.

Adams also spoke about his plan to restore the Brooklyn War Memorial in Cadman Plaza Park.

“The War Memorial was closed for decades,” he said. “But not while I’m borough president. I’m going to allocate $1 million to open it for veterans.” The plan includes making the facility accessible for the disabled. You are here because you are not alone,” said Deputy Borough President Diana Reyna. “We want you to be connected to every resource this city has to offer, that this great borough has to offer. It’s produced so much talent – thank you for all of your service. Thank you for the freedom you provide us, and for staying on top of what matters most: on nation united, defending its rights.”

“Veterans Day is all about saying thank you,” said Fort Hamilton Colonel Joseph D. Davidson,” “It should be honored year round.