Parents: School piled on the punishments for autistic, ADHD kids 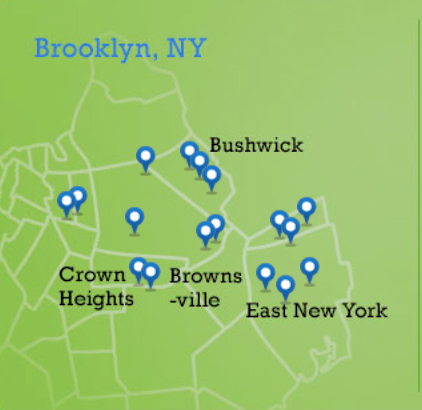 A lawsuit related to the treatment of learning-disabled children attending the Achievement First Crown Heights charter school may expand to include other Brooklyn schools in the network. Map by Achievement First
Share this:

A lawsuit related to the treatment of learning-disabled children attending the Achievement First Crown Heights charter school may expand to include other Brooklyn schools in the network, according to the nonprofit New York Legal Assistance Group (NYLAG).

NYLAG, along with Jenner & Block, filed a lawsuit on Thursday on behalf of five parents of children attending Achievement First Crown Heights.

There are 17 Achievement First charter schools in Brooklyn. NYLAG has set up a hot line (212-659-6197) for parents of disabled children who are concerned about the education their kids are getting.

The parents say that Achievement First Crown Heights denied the five children — all of whom have learning disabilities and other conditions — the education they are legally entitled to, and piled on harsh punishments for infractions they were not able to control.

These include minor disciplinary infractions, such as fidgeting or failing to look at the teacher while he or she is teaching. Many students with disabilities such as autism and ADHD, cannot control this type of behavior, according to Movahed.

“One case jumps out,” she said. “A child diagnosed with autism was punished for classical autistic behavior,” including failing to track the teacher with his eyes. The child also has auditory processing delays, Movahed said.

“He needs a couple of extra beats,” she said. “He was punished for failing to respond immediately. It’s pretty rough.”

The school day is two hours longer than a traditional public school day. Attendance goals are set, the school network says, “and strong, swift intervention with students and parents occurs if student attendance falters.” Teachers tweet about “joyful rigour,” and children are told from day one that they are headed to college.

Leonore Waldrip, a spokesperson for Achievement First, said in a statement on Friday, “We are still reviewing the lawsuit, and cannot comment on the specific allegations at this time.”

“However, Achievement First Crown Heights is committed to serving all students at a high level, including those with disabilities,” she said. “We serve a substantial number of students with both modest and significant special education needs, and our school leaders, teachers and other professionals work tirelessly each day to serve all our students well. Most of our students who receive special education services are experiencing real growth, and we have high levels of overall parent satisfaction.”

She added, “That said, we constantly strive to improve our program and, in particular, have made significant improvements in our special education supports in recent years.”

According to the legal filing, one kindergartener (called D.W.) with a host of disorders including “anxiety, autistic features, likely Attention Deficit Hyperactivity Disorder, processing delays, hypotonia, speech and language delays and asthma” was punished for not being able to hold still or track the teacher with his eyes, and for responding negatively to loud sounds or bright lights.

His behavior had been described in an education plan known as an Individualized Education Programs (IEP), according to legal documents.

Soon after kindergarten started, another child, Z.W., was put on probation and repeatedly confined for periods ranging from roughly 20 minutes to 50 minutes in a darkened timeout room “barely larger than a closet,” according to the complaint. The suit claims that the school shamed the child by issuing public demerits, imposed detention, suspending him, excluding him from classroom activities and sending him to attend class with a younger sibling. For two months in 2013, the school required him to wear a weighted vest for up to eight hours per day, the suit says.

Z.W.’s parents made repeated requests in 2013, 2014 and 2015 to the school and city’s Department of Education (DOE) to have the child reevaluated. According to the suit, DOE told the parent that because Z.W. was already receiving “all the services that are offered,” there was no need for him to be evaluated.

The child failed to receive the occupational therapy, physical therapy, paraprofessional services and speech and language therapy mandated by his IEPs, according to the legal filing. During Z.W.’s first, second, and third grade years, therapists who were assigned to these services “routinely failed to appear,” according to the complaint, and failed to provide make up services.

Movahed said the Office of the Public Advocate referred the cases to them.

“The facts in this lawsuit should horrify anyone with a conscience,” Public Advocate Letitia James said in a statement on Friday.

“Schools are supposed be safe havens for our children, not places where they are humiliated and punished. It is particularly jarring that these actions were taken against students with disabilities, who often cannot voice their anguish. Every child deserves an equal education free from fear and abuse. I thank NYLAG and Jenner & Block for taking on this case, and look forward to continue working with them to protect our children in every way possible.”

Movahed said it is the responsibility of the school, and ultimately DOE, to identify children who may have disabilities. This includes charter schools as well as traditional public schools. DOE is named in the lawsuit.

A New York City Law Department spokesperson told the Eagle on Friday, “We have not seen the lawsuit, but it will be reviewed once we are served.”

Updated Nov. 12 to fix a typo that referred to a child who was put on probation and repeatedly confined as “D.W.” According to NYLAG’s Special Litigation Unit, the child should be referred to as “Z.W.”

Update: A letter to the editor on this topic from a satisfied guardian is published here. Author of book on charter school movement to speak in Brooklyn