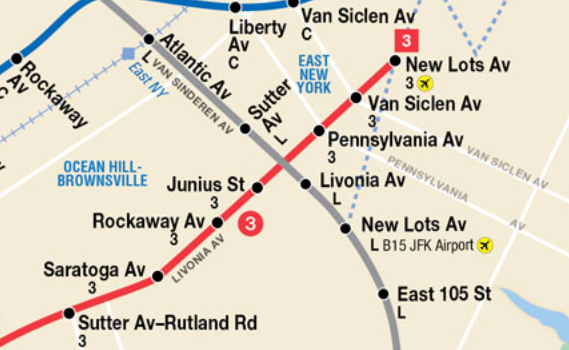 In its budget proposed on Wednesday, the MTA agreed to fund a long-awaited connection between the Livonia Avenue – Junius Street L and 3 lines in Brownsville. Map courtesy of MTA.
Share this:

In its five-year capital budget proposed on Wednesday, the MTA agreed to fund a long-awaited connection between the Livonia Avenue – Junius Street L and 3 lines in Brownsville.

Currently, riders must walk along a desolate stretch and pay a second fare to pass from one line to another. The lines are only one block apart.

The MTA has budgeted $30 million for the project. Another $15 million will go towards making the station ADA accessible.

“Today represents victory for the long-struggling straphangers of Brownsville and East New York,” Brooklyn Borough President Eric Adams said in a statement Wednesday. Adams had been pushing for the connection.

“Connecting the Livonia Avenue and Junius Street stations on the L and 3 lines, respectively, is an imperative for these growing and oft-ignored communities, and I am pleased that the MTA has at last heeded the call for capital investment in this plan,” he added, calling the double fare “unfair to residents already struggling to make ends meet.”

The proposed budget also includes $5 million to study an extension of the Eastern Parkway line to provide service on the 3 and 4 lines along Utica Avenue in Brooklyn.

A line running under Utica Avenue has been proposed multiple times over the past decades. In April, Mayor Bill de Blasio proposed it again. How it would be funded, however, has not been answered.

More on the capital budget at http://web.mta.info/capital/pdf/CapitalProgram2015-19_WEB%20v4%20FINAL_small.pdf