October 15, 2015 By Scott Enman Special to the Brooklyn Eagle On any given weekend, you can expect to find the Williamsburg nightclub Verboten packed to the brim with inebriated youths dancing and perspiring to blaring house music.

On Monday and Tuesday, when most clubs are closed, you can find those exact same partygoers sweating inside Verboten to the same tunes. Although at this time, they aren’t clubbing — they’re taking part in the club’s popular Willkommen Deep House Yoga series.

George Faya, an actor, DJ and one of the club’s owners, had an innovative idea on how to spice up the yoga scene, in which classes traditionally take place in studios.

Several years back, Faya was dating a woman who was becoming a certified yoga instructor, and she asked him if he would DJ one of her classes to deep house — a subgenre of house music known for its heavy basslines, groovy vocals and hints of funk.

House music enthusiasts may define deep house differently, but Faya says there are three key components to the genre.

“If I had to bullet point what deep house is, I would say it’s soulful, mellow and atmospheric,” said Faya.

In addition to spinning himself, Faya hires other DJs for the yoga series. He explained that not just any DJ can mix for a class. He emphasized that the DJs need to have done yoga before and be knowledgeable of the practice.

Inside Verboten’s main room, the students lay their mats across a candle-lit dance floor as incense wafts through the space. Along the walls is a video montage of natural landscape and street scenes from cities around the world.

The club’s staff is constantly looking for innovative ways to make the classes unique. For example, Faya has invited a professional cellist to come and play inside the club for a session.

Dina Ivas, one of the several yoga instructors for the program, praises the addition of house music.

“The deep house really makes it a sensory experience that you wouldn’t usually get in a normal yoga class,” says Ivas.

“There’s a meditative stillness in deep house because of the chord progression and it creates a calm atmosphere,” Faya added.

Ivas explained that with the addition of deep house music, she has to lead her class differently.

“I talk less. I let them rest more and really listen and feel the music,” said Ivas.

A club’s sound system can be overwhelming at times, especially for yoga, which requires the utmost concentration, serenity and patience. Faya, however, keeps the music at a calculated decibel level — low enough to hear the teacher, but loud enough to keep yogis in sync with the music.

“I try to play something with a groove,” said Faya. “I’m not going to play something with an overwhelming beat. If they need a boost or need to be energized through a hard posture, I’ll bump up the beats per minute [BPM]. Or if they’re cooling down, I’ll turn the BPM down a couple notches. I cater to them, depending on what they bring to the mat.”

In addition to mixing, Faya is also in charge of the lights. On a given night he can be found scurrying back and forth from his DJ equipment to the light control panel, keeping the music and lights in tandem with each other.

For example, one evening as the class was winding down, the class rested on the floor with towels over their heads. George put on a soft song, added a filter, and projected stars on the floor across the students’ glistening bodies.

When Verboten isn’t hosting its yoga sessions inside the club, the classes can be found in open-air locations across Brooklyn.

Courses in the past have taken place in a meadow in McCarren Park, in Havemeyer Park along the East River for the sunset and high up on the Brooklyn Athletic Club’s roof deck.

At a class on the roof of the Brooklyn Athletic Club in Williamsburg, Ivas addressed her students.

“Take in all the outside elements,” said Ivas. “Take into account the bass. Let yourself sway if you feel the need. Inhale and exhale with the breeze. Follow the music.”

Faya added, “I know they’re really feeling it when they’re in chair poise and I see them shaking their behinds.”

Don’t be surprised however if that “shaking of behinds” turns into a full on dance party.

“I’ve had classes where the students break out into spontaneous dancing,” says Faya. “Depending on the chemistry of the class, the students may dance or on other nights they may want a calmer, more meditative experience.”

The Sunday class includes mimosas and fresh fruit salad in case you missed that boozy brunch with your friends.

So if you’re looking to cleanse your body from a weekend of partying or if you simply want to start your week off on the right foot, one of Verboten’s Deep House Yoga classes might be right for you. For more information, visit verbotennewyork.com/events/culture/. 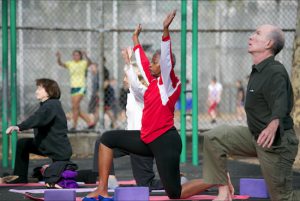