The first ever Rock ‘n’ Roll Brooklyn Half Marathon kicked off Saturday at Grand Army Plaza. Photo courtesy of the Competitor Group
Share this:

The Brooklyn weather on Saturday couldn’t have been more welcoming for the thousands of runners who turned out to run in the first-ever Rock ‘n’ Roll Brooklyn Half Marathon. With 17,500 entrants, it was the largest inaugural half marathon in U.S. history.

Saturday’s race kicked off at the Grand Army Plaza. A three-runner pack comprised of Mekuria Abebe Sihine of Ethiopia, his compatriot, Birhanu Dare Kemal, and Mengitsu Nebsi of New York City, went right to the front with a strong start. American pre-race favorite Ben Bruce of Flagstaff, Arizona stayed with them for a few strides, but dropped back into the first mile.

The leaders headed out and back along the beautiful Brooklyn avenues that were lined with cheerleaders, stilted characters in tall wigs and bearded hipster bands jamming on mandolins and acoustic guitars.

The outcome came down to a dramatic finish-line sprint between Kemal and Nebsi. The 29-year-old Kemal edged ahead of his rival and celebrated with raised hands as he broke the finish-line tape in 1:05:03. Nebsi came through one second behind, while Sihine was third in 1:05:38.

“I felt really good,” Kemal said afterward with a smile on his face. “The weather was great and I really liked all the support here in Brooklyn. It helped.”

Farther back in the pack, was Jets star receiver Brandon Marshall who surprised members of his Project 375 team by jumping into the race at the 11-mile mark and accompanying them the last two miles and across the finish line.

Prospect Park hosted the race’s finish-line festival, as Nate Ruess from the Grammy-award winning band, .FUN, jammed in front of the crowd of runners wearing their finish medals. 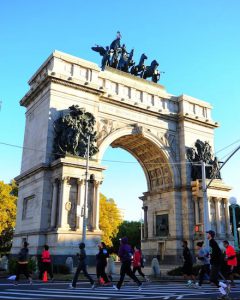