NYU Lutheran CEO Wendy Z. Goldstein chats with Community Board 10 Chair Brian Kieran prior to the start of the meeting.
Share this:

Lutheran Medical Center, which made news back in April when it signed an affiliation agreement with health care giant NYU Langone, is making news again — this time by entering into a full merger with its big brother.

The Sunset Park hospital, which has been called NYU Lutheran since April, is rapidly moving toward a full-blown merger with NYU Langone, according to NYU Lutheran CEO Wendy Z. Goldstein.

The merger is expected to be completed in January, Goldstein told Community Board 10 Monday night. It is contingent upon regulatory approvals from New York state.

The difference between an affiliation and a merger, according to Goldstein, is that an affiliation is an agreement in which the two parties pledge to work together for a certain period of time, which in the case of NYU Lutheran and NYU Langone is five years. A merger is the formal joining together of two separate institutions into one entity.

“There will be one corporate entity at the end of this process. We will be part of the NYU Langone system,” Goldstein told the community board at the meeting, which took place at in the community room at Shore Hill, a senior citizen apartment house at 9000 Shore Road in Bay Ridge.

“This brings us to a whole new level,” Goldstein added.

NYU Langone is a 1,069-bed medical institution whose main facility, Tisch Hospital, is located on the Upper East Side of Manhattan. NYU Langone also runs the Rusk Rehabilitation Center, the Hospital for Joint Diseases and Hassenfeld Children’s Hospital.

NYU Lutheran is a 450-bed hospital. It also includes a handful of community-based health clinics and senior citizen residences.

Under the terms of the merger, NYU Langone will absorb NYU Lutheran’s debt, estimated to be $49 million, most of it stemming from bonds insured by the federal Department of Housing and Urban Development (HUD).

NYU Langone has already made a significant financial investment in NYU Lutheran, Goldstein said. “They have already spent $190 million,” she said. Among the expenditures is an upgrade of NYU Lutheran’s information systems. NYU Langone is building an observation unit at NYU Lutheran, located at 150 55th St.

Goldstein, who said the two hospitals are “seeking a smooth transition for our patients” to the new system, added that employees at NYU Lutheran will be kept on. “Nobody at Lutheran will lose their jobs as a result of the merger,” she said.

NYU Langone also agreed to extend a so-called charity care policy in which patients who are being cared for at NYU Lutheran and require more specialty care than the Brooklyn hospital can provide will be taken to another hospital within the NYU Langone system at no extra cost. “Our trustees worked very hard on this point,” Goldstein said.

Goldstein said the merger came about because the affiliation that began in April was working out so well that Dr. Robert I. Grossman, dean and CEO of NYU Langone, suggested to Goldstein five weeks into the arrangement that the two health care institutions make it permanent.

Under Goldstein’s direction, the hospital formerly known as Lutheran Medical Center had been searching for a health care institution with which it could enter into an affiliation so that Lutheran could improve its Medicaid reimbursement levels and attract high-caliber medical talent.

“We spent quite a few years developing Lutheran so that it would be attractive to a partner. We worked very hard,” Goldstein said.

During that time, Lutheran installed a stroke center, which is one of five comprehensive stroke centers in the U.S., Goldstein said.

One thing won’t change, according to Goldstein. “Our agenda is to provide the best possible care to the people of Brooklyn,” she told the community board. 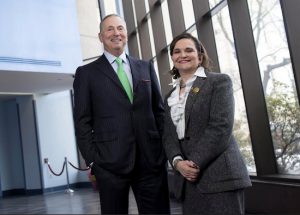