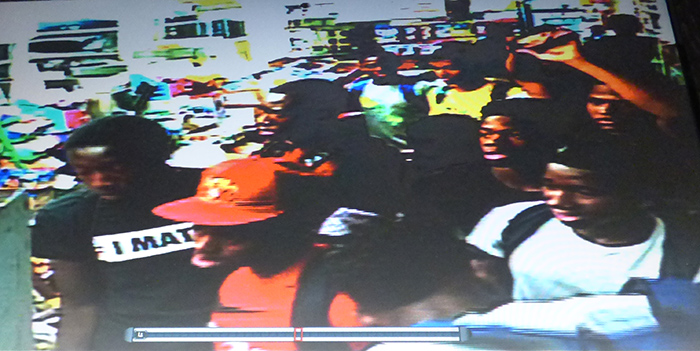 Roughly 20 young men rampaged along Joralemon Street in Brooklyn Heights last Thursday night at 7 p.m., allegedly stealing money from street vendors and terrorizing a popular local deli. Shown: Surveillance video from the deli shows the crowd inside the store. (Not all of the men pictured ripped off the store. One of the men paid for his Arizona tea.) Four were later arrested as they played basketball at Brooklyn Bridge Park. Video stills courtesy of the Sunny Gourmet Deli
Share this:

Cops nabbed four of the suspects about an hour later, while they played basketball at Pier 2 in Brooklyn Bridge Park.

Arrested were Jaquan Lightfoot, 19; Ronald Chapman, 18; Malik Morales, 18; and a 16-year-old male. According to an NYPD spokesperson, they were charged with petit larceny, reckless endangerment, unlawful assembly and criminal mischief.

Joe Kim, the owner of the Sunny Gourmet Deli at 153 Joralemon St., was shaken as he described how the brazen gang flooded into his narrow shop.

“As they walked in, they were grabbing candy and sodas, stuffing their pockets and book bags,” he told the Brooklyn Eagle. “I told them to take out what they took. They said they didn’t take anything and called us racist.” One of the youth did pay for his AriZona tea, he added.

Kim’s employee Dante jumped over the counter and blocked the door.

“He was very brave,” Kim said.

“A couple [of the young men] got out, and they started jumping and kicking the door,” Kim said. The gang smashed the glass and the door frame. The shattered glass hit a woman who was shopping at the deli.

Kim said he called 911 while the rampage was taking place, but it took 40 minutes for police to arrive, he said.

Customers, witnesses, the Brooklyn Heights Association (BHA) and and 84th Precinct all pulled together to apprehend the suspects.

Judy Stanton, executive director of the BHA,  told the Eagle that she was informed that 911 was triaging backlogged calls during the hour at which calls about the deli were coming in.

One of the witnesses phoned her at 7:30 p.m. for help getting through to the police, she said. “By then one witness had biked from the deli to Brooklyn Bridge Park’s Pier 2 and back to report that the kids were all down in the park playing ball.”

“They were great,” Stanton said. The officers studied the videos in the deli and on witnesses’ phones, took their details on the kids and radioed to cops in the park.

Kim said he rode with cops to Pier 2, accompanied by the customer who was struck by the broken glass. There he pointed out the alleged perpetrators, who were arrested.

Happening ‘since the park opened up’

“This has been going on for a while, but [Thursday] was the biggest,” Kim said. He added that this kind of thing has been happening “since the park opened up.”

“All my customers and neighbors say there’s too much loitering, too much noise, and bad things are happening. Customers get their UPS packages stolen, too. Rite Aid hired a security guard,” he added.

Rite Aid did not immediately confirm the hiring.

Neighborhood worker Raymond (who did not want his last name used) said he was helping out at the nut stand at the corner of Court and Joralemon streets that night when he saw the gang snatch money from the Kazi Halal Food stand next door.

“I ran them off,” he said. “Then I see they come up here and broke the glass.”

He added, “It’s not the first time. They go play basketball.”

Mohamed, who runs the nut stand, said this kind of thing happens frequently now. “Ever since they built the park. Sometimes when they pass they grab nuts. There’s 18 to 20 of them. You can’t do nothing.”

Akm Ikbal Hossain, who works at the Halal stand, told the Eagle, “A customer gave me $20, and they took it out of my hand. They were bad guys; it was a big crowd.”

Linda DeRosa, president of the Willowtown Association, which represents a small enclave at the southern end of the Heights, said neighbors have experienced “a level of anxiety from aggressive incidents over the summer from large groups of kids” headed to or from the park.

Over the summer, the area’s only mailbox was set on fire twice, she said. (It has since been replaced.)

Last Friday night, about 20 kids leaving the park were “walking up Joralemon Street jumping on parked cars,” she said. A Willowtown resident told DeRosa that he let the youths know he was in his car, “but they jumped on and over the top of the car anyway.”

A patrol car did arrive shortly on Joralemon Street with its sirens blaring, DeRosa said. “The kids ran.”

The same night a car parked in front of 72 Joralemon St. was vandalized, with its exterior mirrors pulled off. DeRosa said the police dusted for fingerprints.

DeRosa told the Eagle that the Willowtown Association sent a letter to Brooklyn Bridge Park officials asking the park to take some responsibility for the uptick in lawlessness by park users.

“It is certainly true that there are many opposing views between BBPDC [Brooklyn Bridge Park Development Corp.] and surrounding communities right now, but I have to believe we are on the same page when it comes to preventing crimes such as vandalism, arson, theft, graffiti and disturbing the peace,” she said.

A Brooklyn Bridge Park spokesperson told the Eagle on Monday, “It’s best to ask the 84th Precinct about police matters.”

BHA’s Stanton said similar disruptions took place in the north Heights when the bouncy Squibb Bridge was in operation. Not everyone called 911, however.

In April, cops from the 84th Precinct arrested two men following gunfire at the basketball courts. Akeem Reed, 17, and Legrant Foster, 20, were apprehended while in the park.

Brooklyn Bridge Park President Regina Myer said following the gunfire that Park Enforcement Police (PEP) officers patrol the park regularly. “Although they are not armed, they are trained to provide basic assistance, enforce park rules, and to maintain a security presence.”

Officers stationed an increased presence at Pier 2 after the incident.

Overall, crime is down in the 84th Precinct, according to ComStat figures.