Persistence finally paid off for the residents of Bainbridge Street between Stuyvesant Avenue and Malcolm X Boulevard in Bedford-Stuyvesant. The stunning block was finally named the Greenest Block in Brooklyn by GreenBridge and the Brooklyn Botanic Garden (BBG), in cooperation with Brooklyn Borough President Eric Adams’ Office, after entering the contest every year since 2004.

“This contest is not only about creating beauty with plants, although we certainly see that on all the blocks that have entered,” said BBG President Scot Medbury. “At its heart, this contest is about the idea that neighborhood greening can strengthen communities and create committed environmental stewards.”

The winner of the “Greenest Commercial Block” went to Fulton Street between South Portland Avenue and South Oxford Street, and the National Grid “Leadership in Sustainable Practices Award” went to the Ingersoll Garden of Eden, located on Myrtle Avenue between Fleet Place and Navy Street in Fort Greene. East 49th Street between Lenox Road and Linden Boulevard won for “Best Street Tree Beds” and the Bridge Plaza Community Garden on Concord Street between Bridge and Duffield streets won for “Best Community Garden Streetscape.”

Rose Water Restaurant on Union Street in Park Slope won “Greenest Storefront” and the Union Street Block Association won a “Special Commendation” for their “Doggie Spots,” which were created to protect the beds from dogs. A big part of what GreenBridge looks for in the competition is community involvement. This year, the judges saw plenty of that, thanks to Gary Shuford, a block resident who passed away two years ago and is considered the “Patron Saint of Bainbridge Street,” according to Assemblymember Annette Robinson, who lives on the block. Shuford was the one who initially got the block to enter the competition and residents’ involvement has only increased since his death.

“We are thrilled,” the Bainbridge Street Homeowners and Tenants Block Association said in a statement. “But the real credit goes to Gary Shuford, our longtime block association president who passed away two years ago. He inspired us all with his vision and led by example with his ever-present overalls and the watering wagon. The rest of us have just been doing our best to pick up where he left off. Without Gary, Bainbridge Street would not be as strong or as beautiful as it is today.”

The Greenest Block competition got its start in 1994 to encourage greening activities and community involvement. Only 50 blocks entered in the first year, but today, roughly 200 blocks enter each year in 25 neighborhoods with an estimated 40,000 Brooklynites involved. The contest also promotes sustainable gardening practices and promotes the use of native plants. 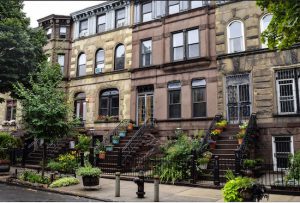