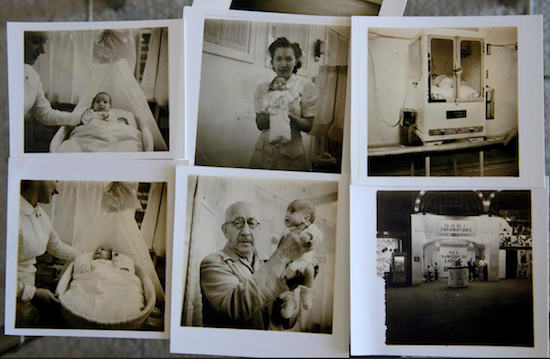 In this photo, taken Thursday, July 23, 2015, at her home in Hackensack, N.J., photographs of Beth Allen, taken by her father, show her at Dr. Martin Couney's Coney Island incubator sideshow, where she was on display with others after she was born premature in 1941. AP Photos/Mel Evans
Share this:

At age 95, Brooklyn native Lucille Horn often reflects on her long, full life, with a husband and five children, and how it might not have happened if not for the renegade doctor who put her in a Coney Island sideshow when she was just days old.

Horn is among thousands of former premature babies whose lives were saved in the early 20th century by Dr. Martin Couney, a pioneer in the use of incubators who sought acceptance for the technology by showing it off on carnival midways alongside freak shows and fan dancers.

“Life Begins at the Baby Incubator,” read one of the signs at his displays — essentially a ward with babies in the glass cribs — that drew huge crowds at world’s fairs, on the Atlantic City boardwalk and Coney Island’s Luna Park. Couney invited desperate parents to bring him their preemies, and he paid for their care with the 25 cents he charged for admission.

Couney died in 1950, shortly after incubators finally came into wider use. Horn and others who owe their lives to him want their stories told so the doctor’s curious tale — one that would cause outrage by today’s standards — doesn’t die with them.

Horn was a twin born prematurely in 1920 in Brooklyn. Her sister had died, and doctors told her father to hold off on a funeral because Lucille would not survive the day.

“He said: ‘Well that’s impossible; she’s alive now. We have to do something for her,'” Horn said. “My father wrapped me in a towel and took me in a cab to the incubator; I went to Dr. Couney. I stayed with him quite a few days. Almost five months.”

Couney was well known in the early 1900s for his work in keeping premature babies alive. The German-trained doctor studied in Paris with Dr. Pierre Budin, who had pioneered the theory of enclosed incubators, designed to keep babies warm and protect them from germs.

U.S. hospitals were slow to adopt incubators for a variety of reasons. A 2000 article on the subject in the Journal of Perinatology cited, among other factors, the belief among early 1900s infant care experts that premature babies were weaklings who, if they survived, were likely to pass on that trait to their own children.

Couney opened his first exhibit with “live babies” at Coney Island’s Luna Park in 1903. By the 1920s, the incubators were kept in a Hansel-and-Gretel-like cottage decorated with the image of a stork overlooking a nest of cherubs. And in the 1930s, he took his incubator babies to the world’s fairs in New York and Chicago, where the display was on the midway next to the show of burlesque fan dancer Sally Rand. Couney ended the sideshows in 1943.

“We think this is a spectacle. We could never do this today,” said Dr. Richard Schanler, director of neonatal services at Cohen Children’s Medical Center of New York. “But at the time, he was a leader. And I think we owe a lot of the very basic principles of neonatology to this gentleman.” In the early 1900s, when most births occurred at home, doctors weren’t always in the picture, and premature babies were often written off. While exact numbers are difficult to determine, medical historians say Couney estimated he saved 7,500 of the 8,500 children that passed through his incubators.

Writer A.J. Liebling noted in a 1939 New Yorker magazine piece that Couney became irate at the suggestion he was merely a showman.

“All my life I have been making propaganda for the proper care of preemies, who in other times were allowed to die,” he quoted the doctor as saying. “Everything I do is strict ethical.”

Beth Allen was born in 1941, and like Mrs. Horn, her twin sister was too small to survive. Her mother, she said, initially rejected putting her child in one of Couney’s incubators, but her father persuaded Couney to talk to his wife, who acquiesced.

“The whole thing is just amazing to me,” Allen, who now lives in Hackensack, New Jersey, told The Associated Press in an interview. “And the older I get, the more appreciative I am of the opportunity that I was given to be here to talk to you, and to live a wonderful life that I had.”

Carol Boyce Heinisch was an incubator baby at Couney’s exhibition in Atlantic City in 1942. Today, the 73-year-old Absecon, New Jersey, woman is a secretary in a law firm. She has a family photograph of Couney’s daughter, Hildegarde, who worked as his nurse in Atlantic City and held Carol days after she was born.

“If it wasn’t for him, maybe I wouldn’t have survived,” Heinisch said. “I’m just very grateful for what he did.”

Barbara Horn recently had her mother record an oral history of her memories, including meeting Couney as a teenager, when she thanked him.

“It’s a story mom has told many times,” the younger Horn said. “Hearing her tell it now, it’s given me a new sense of appreciation for actually how precarious things were for her in the beginning and actually how gutsy Dr. Couney was.”