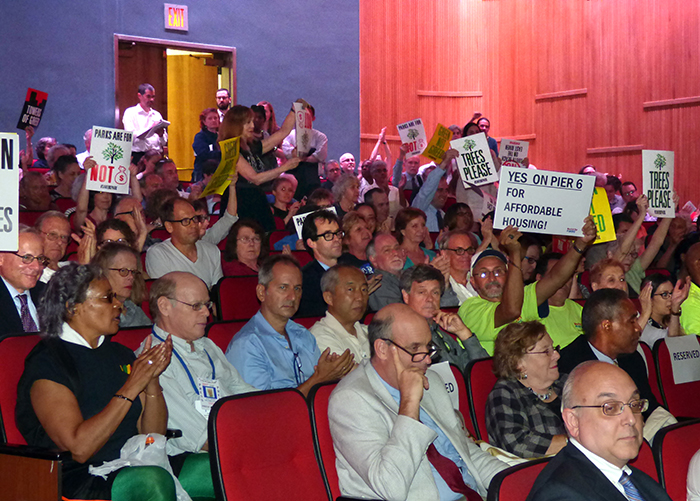 Elected representatives, civic organizations and residents spoke out at a packed five-and-a-half-hour hearing on Thursday regarding two residential towers proposed for Pier 6 in Brooklyn Bridge Park.

People waving placards circled on the sidewalk outside St. Francis College in Brooklyn Heights, and the sound system was turned on in the hall outside the auditorium for those who couldn’t fit inside.

The crowd was overwhelmingly opposed to the towers. Notably, every elected official representing the area stood up against the plan.

More than 90 people, many representing organizations, signed up to testify at the hearing, which was hosted by the Empire State Development Corporation and its subsidiary the Brooklyn Bridge Park Development Corporation, the agencies that oversee compliance with the park’s General Project Plan (GPP). Not all stayed to deliver their remarks, as the hearing stretched on until 11:30 p.m.

Tensions ran high at times, with some audience members booing those who spoke in support of the project.

Fred Kent, president of the Project for Public Spaces, was physically removed from the auditorium by police after he demanded more time to speak. As he was dragged from the room, the crowd chanted, “Let him speak!”

Kent was later allowed to return to the auditorium to say his piece.

“This park is the poster child of public money creating private development,” he said.

Opponents of the Pier 6 proposal said that the Brooklyn Bridge Park Corporation (BBPC) board has failed to provide the raw data that proves the Pier 6 development is necessary to support the park financially, and that the development will only add to already overcrowded schools, streets and infrastructure.

Speakers pointed to other projects planned for the neighborhood, including the massive Long Island College Hospital site, whose potential impact has not been considered in environmental impact studies.

Several speakers, including Dr. Joy Romanski, a climate scientist with the Center for Climate Systems Research at Columbia University, also noted out that the development site sits in the middle of a flood zone that will likely need to be evacuated during the next hurricane. Saying that income from the Pier 6 development is not immediately needed, opponents called for a moratorium on the project pending further environmental analysis.

“I have always opposed housing in Brooklyn Bridge Park. At Pier 6, this is a position that has been taken by every local elected official surrounding the area, including the congressmember, current and former assemblymember and both city councilmembers,” testified state Sen. Daniel Squadron. “In addition, the Pier 6 proposal is opposed by every civic association representing the area surrounding the park. Concerns have also been raised by the City Comptroller, Public Advocate, Community Board 2 and Community Board 6.” Squadron said that in the decade since the Pier 6 Environmental Impact Statement (EIS) was issued, the area has undergone dramatic changes.

Brooklyn Bridge Park is required to be self-sufficient through its commercial and residential projects. Many speakers said that the inclusion of affordable housing to the Pier 6 development, while commendable, runs counter to the commitment that only the amount of development necessary to support the park would be built.

Henry “Ren” Richmond, a member of the People for Green Space Foundation (PFGSF) testified, “We are all here because the city and the park corporation that it controls want to break their fundamental commitment to build only as much housing as necessary to fund the park. However noble, if the park can forego millions of dollars in revenue by including affordable housing in Pier 6, then the scope of the park development can—and should—be reduced.” Richmond said that because of the dramatic rise in real estate prices in the area over the last decade — from roughly $700 per square foot in 2005 to roughly $2,000 per square foot today — the housing and commercial space in the park “will generate far more revenue than ever contemplated in 2005.”

“Let’s not turn this into something that it’s not,” said Deputy Mayor Alicia Glen, chair of the park’s board of directors. “It’s about affordable housing. In the past six months alone more than 100,000 people applied for affordable housing in this community board.”

She maintained that the revenue from the Pier 6 development was necessary for the park to remain self-sufficient, citing other waterfront infrastructure projects that ran short of cash after suffering damage, including Pier 54 at the Chelsea Piers, and Pier 40, part of the Hudson River Park in Manhattan. Glen said further environmental review was not needed since a November 2014 Technical Memo, commissioned by the Brooklyn Bridge Park Corporation (BBPC), concluded that the Pier 6 project would not have any additional significant adverse impacts.

Park President Regina Myer said that Pier 6 “is absolutely essential to the park,” and that the development sites were designed to minimize the project’s footprint. She said the park believes that the modifications proposed, which would allow the addition of affordable housing and other features, “are a vast improvement over the current plan.” Myer also said that an independent financial analysis commissioned by the park and released to Crain’s before the hearing found that the Pier 6 towers are necessary to sustain the park. (The report was not released in time to impact Thursday’s testimony.)

Modifications to the GPP

Thursday’s hearing — part of a process that would allow modifications to the park’s GPP — was the result of a settlement of a lawsuit filed by PFGSF against the park.

The modifications to the GPP would allow affordable housing in the two high-rise towers and allow the park’s board of directors “to determine the number and affordability of the residential units and other characteristics of the building.”

Parks officials have said that all 117 affordable apartments would be placed in the shorter rental building, which would also have 30 market-rate apartments.

Other changes include the addition of retail, a community facility, a 75-seat pre-K space and the elimination of a road looping around the parcels.

The most controversial modification to the GPP would allow the park to build the Pier 6 towers regardless of financial need.

Patrick Killackey, president of the Brooklyn Heights Association, urged the ESD to “focus on precisely what the modification does: it removes the decades-long fundamental commitment to limit any housing on Pier 6 to that which is necessary to financially support the park.” He added that the modification to the GPP would permit the BBPC to make decisions as to Pier 6 “without regard to project finances.”

“Why would you now consider eliminating that central premise? Why would you authorize the construction of 315- and 155-foot towers regardless of whether they provide one needed cent of revenue to this park?”

At a press conference before the hearing, Brooklyn Bridge Park lined up its own supporters to argue that the Pier 6 project was necessary. These supporters included Josh Gold of the Hotel Trades Council; several representatives from Build Up NYC; Tupper Thomas, executive director of New Yorkers for Parks; Kathryn Wild, president of Partnership for NYC; Roland Lewis, president of the Waterfront Alliance; and Milton Puryear of the Brooklyn Greenway Initiative.

At the hearing, Lenore Friedlander, executive director of Build Up NYC said that the Pier 6 project would bring “affordable housing and good jobs for hundreds of workers.”

The park says the project would be built with union labor under an expected project labor agreement between the developers and the Building and Construction Trades Council of Greater New York.

Build Up NYC member Carole Raftrey, an ironworker who lives in Boerum Hill, said she was in favor of the project because “the jobs that will be created are middle class jobs that allow workers to provide for their families.” Rick Russo, senior vice president at the Brooklyn Chamber of Commerce, also backed the development and the economic benefits it would bring to the area, including “ground-floor retail, 30 percent affordable and 500 construction jobs.”

Russo said the project was “critical to the long-term sustainability of the park.”

Community Board 2 approved the modification earlier this month, but added a provision making it clear that any development must be proven necessary to sustain the park’s finances. The CB2 modification would also require full disclosure of raw financial data, backed by a financial auditor, to prove the necessity of the Pier 6 project to Brooklyn Bridge Park to sustain its finances.

This hearing was the next step in the approval process. Updated at 7:15 p.m. on July 31 to clarify that the modifications to the GPP would allow affordable housing in the two high-rise towers and allow the park’s board of directors “to determine the number and affordability of the residential units and other characteristics of the building.”

Updated at 7:30 p.m. on July 31 to add additional comments by speakers.

Updated at 8 p.m. on July 31 to add additional information about CB 2’s approval, with caveats, of the GPP modification.